I have previously written about a different way to control a batch program by passing in parameters on the command line when you invoke the SAS program.

Before looking at data-driven programming, let's review the static approach. I will simulate clusters of univariate normal data as an example.

Suppose that you want to simulate normal data for three different groups. Each group has its own sample size (N), mean, and standard deviation. In my book Simulating Data with SAS (p. 206), I show how to simulate this sort of ANOVA design by using arrays, as follows.

The DATA step contains two loops, one for the groups and the other for the observations within each group. The parameters for each group are stored in arrays. Notice that if you want to change the parameters (including the number of groups), you need to edit the program. I call this method "static programming" because the behavior of the program is determined at the time that the program is written. This is a perfectly acceptable method for most applications. It has the advantage that you know exactly what the program will do by looking at the program.

Notice the difference between the static and dynamic techniques. The static technique simulates data from three groups whose parameters are specified in temporary arrays. The dynamic technique simulates data from an arbitrary number of groups. Currently, the PARAMS data specifies three groups, but if I change the PARAMS data set to represent 10 or 1000 groups, the AnovaDynamic DATA step will simulate data from the new design without any modification.

Generate the parameters from real data

The data-driven technique is useful when the parameters are themselves the results of an analysis. For example, a common simulation technique is to generate the moments of real data (mean, variance, skewness, and so forth) and to use those statistics in place of the population parameters that they estimate. (See Chapter 16, "Moment Matching," in Simulating Statistics with SAS.)

The following call to PROC MEANS generates the sample mean and standard deviation for real data and writes those values to a data set: 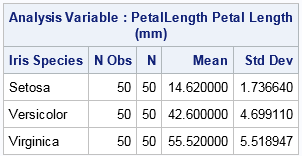 The output data set from PROC MEANS creates a PARAMS data set that contains the variables (N, MEAN, and STDDEV) that are read by the simulation program. Therefore, you can immediately run the AnovaDynamic DATA step to simulate normal data from the sample statistics. A visualization of the resulting simulated data is shown below. 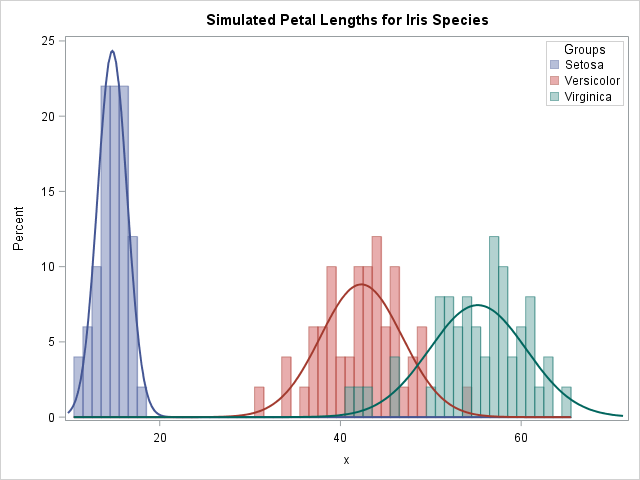 You can run PROC MEANS on other data and other variables and the AnovaDynamic step will continue to work without any modification. The simulation is controlled entirely by the values in the "control file," which is the PARAMS data set.

You can generalize this technique by wrapping the program in a SAS macro in which the name of the parameter file and the name of the simulated data set are provided at run time. With a macro implementation, you can read from multiple input files and write to multiple output data sets. You could use such a macro, for example, to break up a large simulation study into smaller independent sub-simulations, each controlled by its own file of input parameters. In a gridded environment, each sub-simulation can be processed independently and in parallel, thus reducing the total time required to complete the study.

Although this article discusses control files in the context of statistical simulation, other applications are possible. Have you used a similar technique to control a program by using an input file that contains the parameters for the program? Leave a comment.

The post Data-driven simulation appeared first on The DO Loop.