Last week I got the following message:

Mathematically, this request doesn't make sense, as Carol (not her real name) acknowledges. However, if you are working with a client who is not statistically savvy, you might be asked to do the impossible! How can Carol make sense of this request?

How to choose a distribution that matches the data?

In general, statisticians are often asked to choose a model that seems to fit an observed set of data. In simulation studies, the model is used to simulate samples that have the same distributional properties as the real data. In the book Simulating Data with SAS (Chapter 16), I discuss many strategies, including the following:

These ideas (and others) are illustrated in the following diagram, which is also from Wicklin (2013, p. 298): 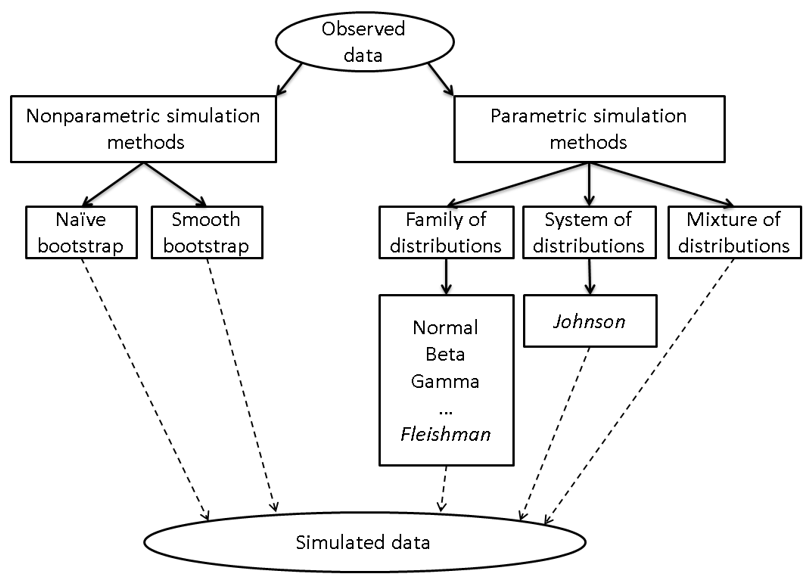 The flowchart shows a few paths that a researcher can follow to model data. Most of the paths are also applicable to multivariate data.

Simulate data from the "eyeball distribution"

Now let's discuss the specific question that I was asked: how to simulate a "bounded" normal distribution. If Carol has access to the data, she could use the techniques in the previous section. Consequently, I assume that Carol does not have access to the data. This can happen in several ways, such as when you are trying to reproduce the results in a published article but the article includes only summary statistics or a graph of the data. If you cannot obtain the original data from the authors, you might be forced to simulate fake data based only on the graph and the summary statistics.

I call this using the "eyeball distribution." For non-native speakers of English, "to eyeball" means to look at or observe something. When used as an adjective, “eyeball” indicates that a quantity was obtained by visual inspection, rather than through formal measurements. Thus an "eyeball distribution" is one that is chosen heuristically because it looks similar to the histogram of the data. (You can extend these ideas to multivariate data.)

From Carol's description, the histogram of her data is symmetric, unimodal, and "bell-shaped." The data are in the interval [a, b]. I can think of several "eyeball distributions" that could model data like this:

The first option is often the most reasonable choice. Even though the original data are in the interval [a, b], the simulated data do not have to be in the same interval. If you believe that the original data are normally distributed, then simulate from that model and accept that you might obtain simulated data that are beyond the bounds of the original sample. The same fact holds for the third option, which estimates the standard deviation from a histogram.

The following SAS DATA step implements the last three options. The sample distributions are displayed by using a comparative histogram in SAS: 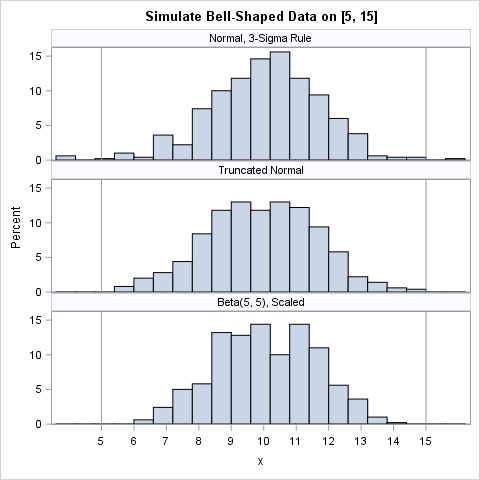 Although the preceding SAS program answers the question Carol asked, let me emphasize that if you (and Carol) have access to the data, you should use it to choose a model. When the data are unobtainable, you can use an "eyeball distribution," which is basically a guess. However, if your goal is to generate fake data so that you can test a computational method, an eyeball distribution might be sufficient.

The post Data unavailable? Use the "eyeball distribution" to simulate appeared first on The DO Loop.