Money magazine (Jan/Feb 2018) contains an article about how much it costs to give birth in the US. The costs, which are based on insurance data, include prenatal care and hospital delivery but exclude infant care. The data are compiled for each state (including Washington, DC) and by type of delivery (vaginal versus cesarean section). The data includes the average and median costs for each state.

The online version of the article contains a map and a table of average costs, colored by the quintiles of the costs. Because I think that median costs are more relevant, I decided to create a visualization of the distribution of the median costs. Additionally, I want to visualize the incremental cost of a C-section over a vaginal delivery. According to the CDC, about 32% of deliveries are C-sections in the US. Cesarean delivery is major surgery and often requires an additional two days of hospital recovery in addition to operating-room charges.

With a little sleuthing, I was able to locate the data and download it into a SAS data set. You can download the data and SAS program that creates the graphs in this article.

Cost Distribution and incremental cost of a cesarean delivery 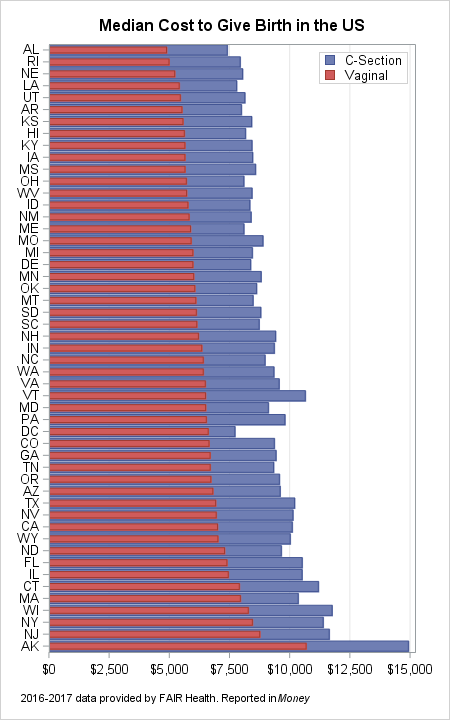 If you are more interested in the cost of a cesarean delivery, I created a similar graph sorted by the cost of a C-section. No matter how you sort it, the graph indicates that a C-section costs about $2500 to $3500 more than a vaginal delivery. In Washington, DC, the incremental cost is about $1100, which is relatively low. In Vermont and Alaska, the incremental cost is more than $4000, which is relatively high.

The Money magazine map of the data does not reveal any unexpected regional trends. Costs are high in Alaska and New England. Costs are low in some southern states.

For a more sophisticated audience, you can use a scatter plot to plot the costs for vaginal and cesarean delivery in each state. A plot of the median costs is shown below. A regression line to these data has a slope of 1.2, which indicates that, on average, the median cost of a C-section is about 20% more than for a vaginal delivery. This visualization also enables you to see that Alaska is an extreme outlier for both types of delivery. 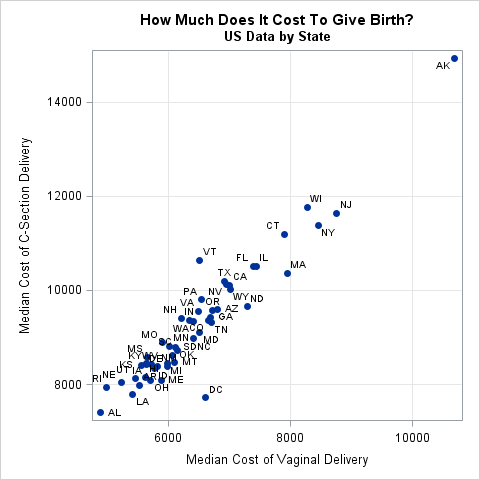 The Money article about these data points out two facts that cannot be seen in the data. First, it says that women "who have no insurance... are usually charged a higher amount than the negotiated rate." Second, US women "pay more to have a baby than residents of any other country. The highest prices in the U.S. were more than double those of the second-most expensive country, Switzerland" (emphasis added)." For a comparison of different countries, see Parents magazine (Jan 2017).

What interesting facts do you notice about these data? Leave a comment.

The post How much does it cost to give birth in the US? appeared first on The DO Loop.