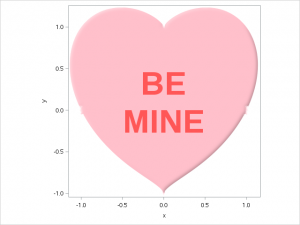 Is it time to add SAS to the list of "romance" languages?*.

It's no secret that there are enthusiastic SAS programmers who love the SAS language. So it only makes sense that sometimes, these programmers will "nerd out" and express their adoration for fellow humans by using the code that they love. For evidence, check out these contributions from some nerdy would-be Cupids:

Recently a SAS community member took this to the next level and crafted a marriage proposal using SAS. With help from the SAS community, this troubadour wrote a SAS program that popped the question in a completely new way. Our hero wanted to present a SAS program that was cryptic enough so that a casual glance would not reveal its purpose. But it had to be easy to open and run within SAS University Edition. His girlfriend is a biostatistics student; she's not an expert in SAS, but she does use it for her coursework and research. With over 70 messages exchanged among nearly 20 people, the community came through.

When Brandon's beloved ran his program in SAS University Edition, she was presented with an animated graphic that metaphorically got down on one knee and asked for her hand in marriage. And she said "Yes!" (Or maybe in SAS terms her answer was "RESPONSE=1".)

Simulated version of the proposal created with SAS

A marriage proposal that was helped along by the SAS Support Communities? That's definitely a remarkable event, but it's not completely surprising to us at SAS. SAS users regularly impress us by combining their SAS skills with their creativity. And, with their willingness to help one another.

The SAS Valentine Challenge for YOU 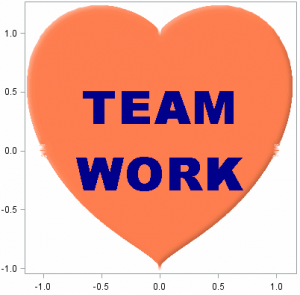 With Valentine's Day approaching, we thought that it would be fun to prepare some Valentine's greetings using SAS. We've started a topic on the SAS Support Communities and we invite you to contribute your programs and ideas. You can use any SAS code or tool that you want: ODS Graphics, SAS/GRAPH, SAS Visual Analytics, even text-based output. Our only request is that it's something that another SAS user could pick up and use. In other words, show your work!

It's not exactly a contest so there are no rules for "winning." Still, we hope that you'll try to one-up one another with your creative contributions. The best entries will get bragging rights and some social media love from SAS and others. And who knows? Maybe we'll have some other surprises along the way. We'll come back and update this post with some of our favorite replies.

Check out the community topic and add your idea. We can't wait to see what you come up with!

* Yes, I know that "romance" languages are named such because they stem from the language spoken by the Romans -- not because they are inherently romantic in the lovey-dovey sense. Still, it's difficult to resist the play on words.

A Valentine challenge: express your <3 with SAS was published on SAS Users.