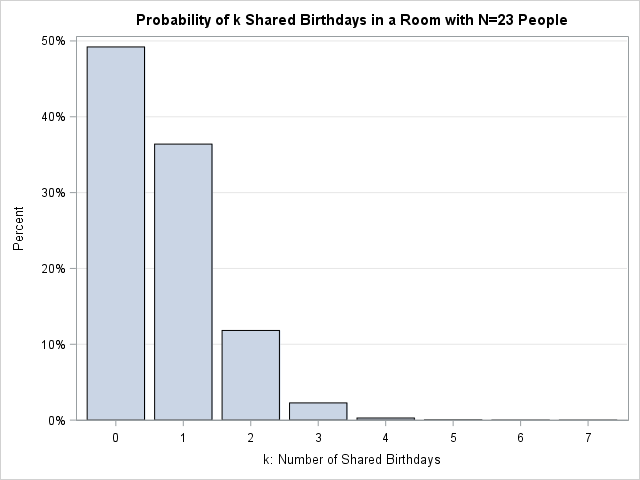 This article uses simulation in SAS to examine the multiple-birthday problem. If you are interested in a theoretical treatment, see Fisher, Funk, and Sams (2013, p. 5-14).

The probability of multiple shared birthdays for N=23

You can explore the classical birthday problem by using probability theory or you can estimate the probabilities by using Monte Carlo simulation. The simulation in this article assumes 365 equally distributed birthdays, but see my previous article to extend the simulation to include leap days or a nonuniform distribution of birthdays.

The simulation-based approach enables you to investigate the multiple birthday problem. To begin, consider a room that contains N=23 people. The following SAS/IML statements are taken from my previous article. The Monte Carlo simulation generates one million rooms of size 23 and estimates the proportion of rooms in which the number of shared birthdays is 0, 1, 2, and so forth.

The output summarizes the results. In less than half the rooms, no person shared a birthday with anyone else. In about 36% of the rooms, one birthday is shared by two or more people. In about 12% of the room, there were two birthdays that were shared by four or more people. About 2% of the rooms had three birthdays shared among six or more individuals, and so forth. In theory, there is a small probability of a room in which 8, 9, 10, or 11 birthdays are shared, but the probability of these events is very small. The probability estimates are plotted in the bar chart at the top of this article. 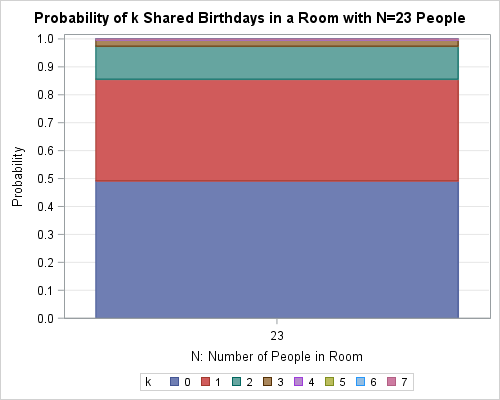 The probability of shared birthdays among N people

The previous section showed the distribution of shared birthdays for N=23. You can download the SAS program that simulates the multiple birthday problem for rooms that contain N=2, 3, ..., and 60 people. For each simulation, the program computes estimates for the probabilities of k matching birthdays, where k ranges from 0 to 30. 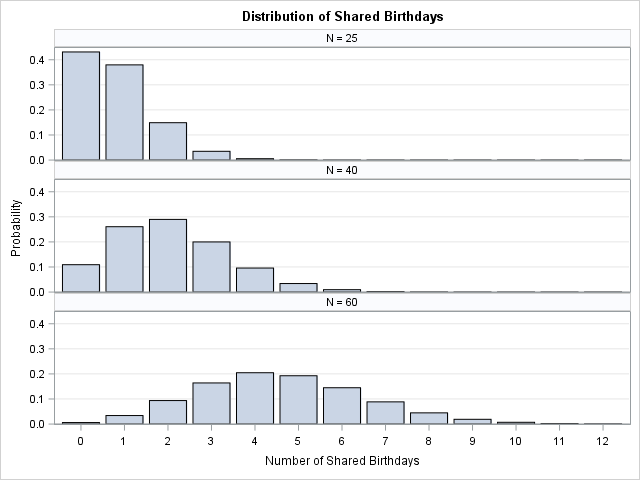 There are a few ways to visualize those 59 distributions. One way is to plot 59 bar charts, either in a panel or by using an animation. A panel of three bar charts is shown to the right for rooms of size N=25, 40, and 60. You can see that the bar chart for N=25 is similar to the one shown earlier. For N=40, most rooms have between one and three shared birthdays. For rooms with N=60 people, most rooms have between three and six shared birthdays. The horizontal graphs are truncated at k=12, even though a few simulations generated rooms that contain more than 12 matches.

The following stacked band chart is an attempt to visualize the distribution of shared birthdays for ALL room sizes N=2, 3, ..., 60. (Click to enlarge.) 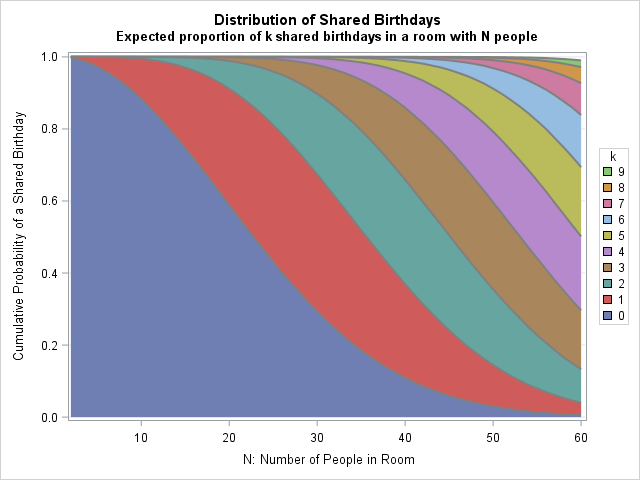 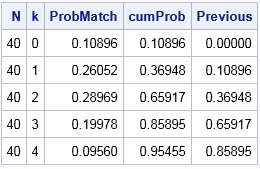 What do you think? Do you like the stacked band plot that summarizes the results in one graph, or do you prefer a series of traditional bar charts? Leave a comment.

The post The distribution of shared birthdays in the Birthday Problem appeared first on The DO Loop.