This article describes and implements a fast algorithm that estimates a median for very large samples. The traditional median estimate sorts a sample of size N and returns the middle value (when N is odd). The algorithm in this article uses Monte Carlo techniques to estimate the median much faster.

Of course, there's no such thing as a free lunch. The Monte Carlo estimate is an approximation. It is useful when a quick-and-dirty estimate is more useful than a more precise value that takes longer to compute. For example, if you want to find the median value of 10 billion credit card transactions, it might not matter whether the median $16.74 or $16.75. Either would be an adequate estimate for many business decisions.

Although the traditional sample median is commonly used, it is merely an estimate. All sample quantiles are estimates of a population quantity, and there are many ways to estimate quantiles in statistical software. To estimate these quantities faster, researchers have developed approximate methods such as the piecewise-parabolic algorithm in PROC MEANS or "probabilistic methods" such as the ones in this article.

Example data: A sample from a mixture distribution 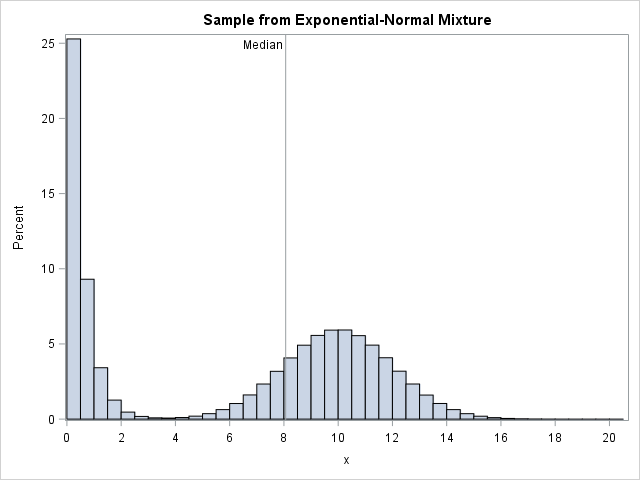 Consider the following data set, which simulates 10 million observations from a mixture of an exponential and a normal distribution. You can compute the exact median for the distribution, which is 8.065. A histogram of the data and the population median are shown to the right.

The basic idea of resampling methods is to extract a random subset of the data and compute statistics on the subset. Although the inferential statistics (standard errors and confidence interval) on the subset are not valid for the original data, the point estimates are typically close, especially when the original data and the subsample are large.

It takes less time to extract a 10% subset and compute the median than it takes to compute the median of the full data. This naive resampling is simple to implement and often works well, as in this case. The estimate on the resampled data is close to the true population median, which is 8.065. (However, the standard error of the traditional estimate is smaller.)

You might worry, however, that by discarding 90% of the data you might discard too much information. In fact, there is a 90% chance that we discarded the middle data value! Thus it is wise to construct the subsample more carefully. The next section constructs a subsample that excludes data from the tails of the distribution and keeps data from the middle of the distribution.

A probabilistic algorithm for the median

This section presents a more sophisticated approximate algorithm for the median. My presentation of this Monte Carlo algorithm is based on the lecture notes of Prof. H-K Hon and a Web page for computer scientists. Unfortunately, neither source credits the original author of this algorithm. If you know the original reference, please post it in the comments.

Begin with a set S that contains N observations. The following algorithm returns an approximate median with high probability:

The idea is to use the random sample only to find an interval that probably contains the median. The width of the interval depends on the size of the data. If N=10,000, the algorithm uses the 40th and 60th percentiles of the random subset R. For N=1E8, it uses the 49th and 51th percentiles.

The following SAS/IML program implements the Monte Carlo estimate for the median:

In summary, this article shows how to implement a probabilistic algorithm for estimating the median for large data. The Monte Carlo algorithm uses a bootstrap subsample to estimate a symmetric interval that probably contains the true median, then uses the interval to strategically choose and analyze only part of the original data. For large data, this Monte Carlo estimate is much faster than the traditional estimate.

The post A Monte Carlo algorithm to estimate a median appeared first on The DO Loop.