Suppose you want to find observations in multivariate data that are closest to a numerical target value. For example, for the students in the Sashelp.Class data set, you might want to find the students whose (Age, Height, Weight) values are closest to the triplet (13, 62, 100). The way to do this is to compute a distance from each observation to the target. Unfortunately, there are many definitions of distance! Which distance should you use? This article describes and compares a few common distances and shows how to compute them in SAS.

Euclidean and other distances

Both of these distances are supported in the SAS DATA step. You can use the EUCLID function to compute Euclidean distance and use the SUBABS function to compute the L1 distance. For example, the following DATA step computes the distance from each observation to the target value (Age, Height, Weight) = (13, 62, 100): 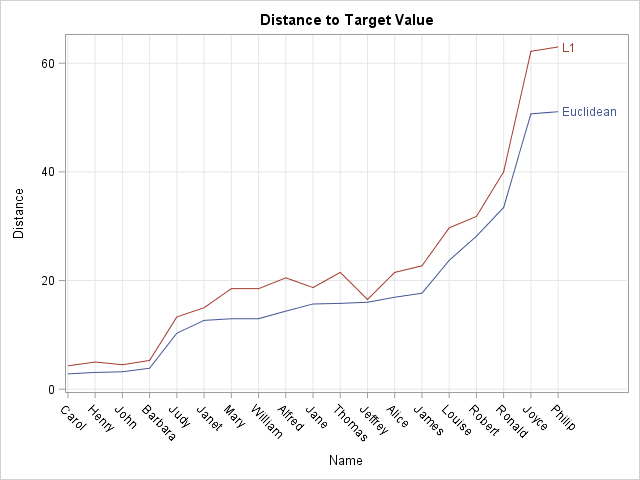 If you order the students by their L1 distances, you will obtain a different ordering. For example, in an L1 ranking, John and Henry would switch positions and Jeffery would be ranked 7th instead of 12th.

There is a problem with the computations in the previous section: the variables are measured in different units, but the computations do not account for these differences. In particular, Age is an important factor in the distance computations because all student ages are within three years of the target age. In contrast, the heaviest student (Phillip) is 88 pounds more than the target weight.

The distance formula needs to account for amount of variation within each variable. If you run PROC MEANS on the data, you will discover that the standard deviation of the Age variable is about 1.5, whereas the standard deviations for the Height and Weight variables are about 5.1 and 22.8, respectively. It follows that one year should be treated as a substantial difference, whereas one pound of weight should be treated as a small difference.

A way to correct for differences among the scales of variables is to standardize the variables. In SAS, you can use PROC STDIZE to standardize the variables in a variety of ways. By default, the procedure centers each variable by subtracting the sample mean; it scales by dividing by the standard deviations. The following procedure all also writes the mean and standard deviations to a data set, which is displayed by using PROC PRINT: 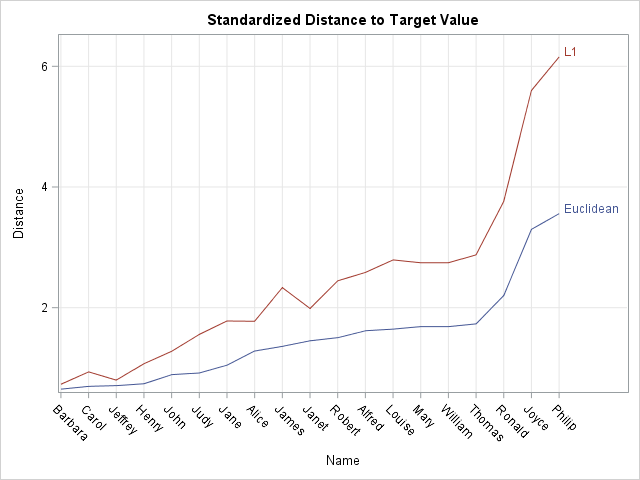 In the standardized coordinates "one unit" corresponds to one standard deviation from the mean in each variable. Thus Age is measured in units of 1.5 years, Height in units of 5.1 inches, and Weight in units of 22.8 pounds. Notice that some of the students have changed positions. Carol is still very similar to the target value, but Jeffrey is now more similar to the target value than previously thought. The smallest student (Joyce) and largest student (Philip) are still dissimilar (very distant) from the target. 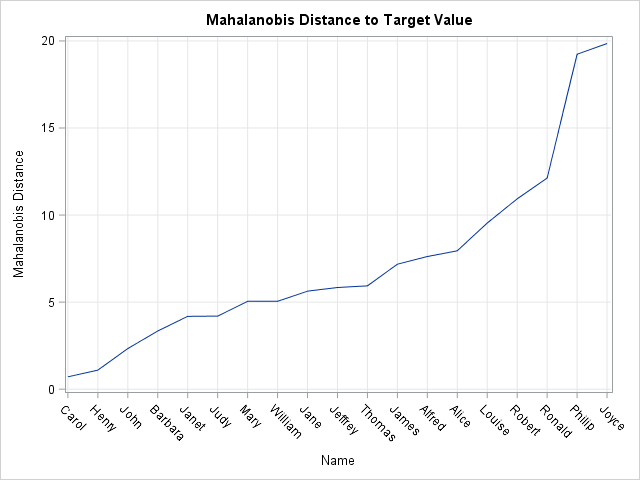 If you would like to examine or modify any of my computations, you can download the SAS program that computes the various distances.

For other articles about Mahalanobis distance or distance computations in SAS, see:

The post Find the distance between observations and a target value appeared first on The DO Loop.