However, there are three "ATTRS" that you might find more confusing: CYCLEATTRS, ATTRPRIORITY, and STYLEATTRS. These options determine the colors, line patterns, and marker symbols that are used to represent groups in your data. They interact with each other when you use a GROUP= option to specify groups and also use multiple statements to overlay several graph types such as scatter plots and series plots.

This article summarizes the ATTRPRIORITY, CYCLEATTRS, and STYLEATTRS keywords and provides an example that shows how they interact with each other. The end of this article presents a list of references for further reading.

In PROC SGPLOT, many statements support the GROUP= option. In order to distinguish one group from another, the groups are assigned different attributes such as colors, line patterns, marker symbols, and so on. The colors, patterns, and other attributes are defined by the current ODS style (or by the STYLEATTRS statement or the DATTRMAP= data set), but the ATTRPRIORITY and CYCLEATTRS keywords determine how the colors, patterns, and symbols combine for each group. The following describes the syntax and purpose of each keyword:

The ATTRPRIORITY and CYCLEATTRS options interact when you use two or more statements to overlay graphs. In Warren Kuhfeld's short course on "Advanced ODS Graphics Examples in SAS," he presents a slide that shows how these options interact. The following example creates a panel of graphs that is inspired by Warren's slide. Each graph in the example shows the same data (the closing stock price for two companies in 2001–2003) displayed for each of the four combinations of the ATTRPRIORITY and CYCLEATTRS options. Although the LOESS statement can display the markers, I used a separate SCATTER statement because I want to illustrate how the CYCLEATTRS statement affects the attributes. 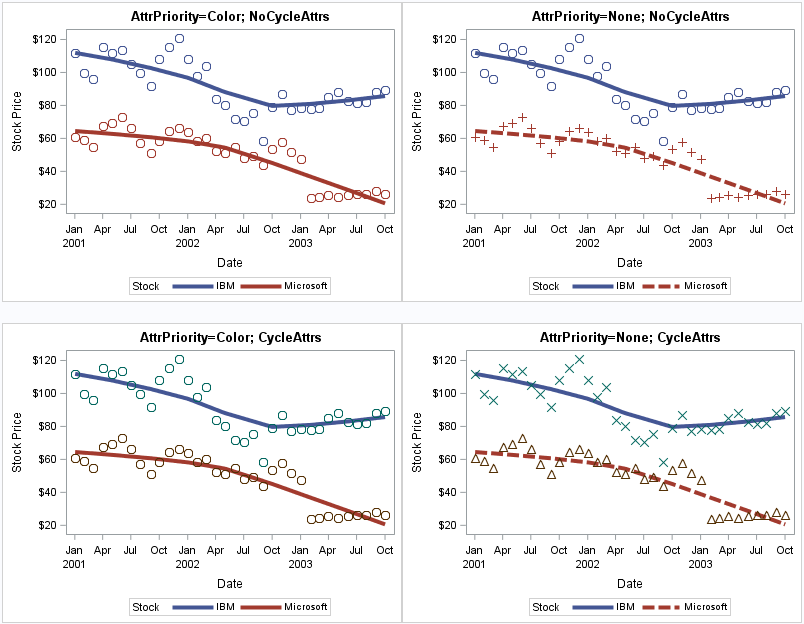 The panel for the example shows the interaction between the ATTRPRIORITY= and CYCLEATTRS options.

Depending on your needs, either graph in the first row would be appropriate for color graphs. The lower-right plot is most suitable for ODS styles that create monochrome graphs.

After you understand the interaction between the ATTRPRIORITY= and CYCLEATTRS options, it is straightforward to use the STYLEATTRS statement. The statement merely overrides the group attributes for the current style. If you specify fewer attributes than the number of groups, the attributes are cyclically reused. For example, the following STYLEATTRS statement specifies that all lines should be solid but specifies different colors and symbols for the groups. Because two attributes are specified, the second statement reuses the same colors and symbols even though the NOCYCLEATTRS option is set: 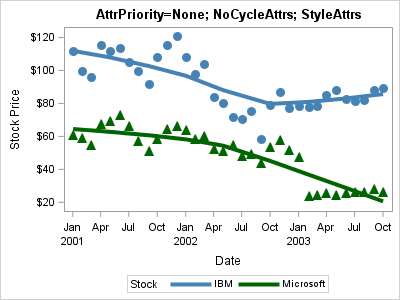 Here's another trick I learned from Warren's course: You can use the RESET= option to reset the default value of the ATTRPRIORITY option for the current style:

This article provides an example and summarizes the behavior of the ATTRPRIORITY= option (on the ODS GRAPHICS statement) and the CYCLEATTRS option (on the PROC SGPLOT statement). These options interact when you have several statements in PROC SGPLOT that each use the GROUP= option. You can use the STYLEATTRS statement to override the default attributes for the current ODS style.

Much more can be said about these options and how they interact. In addition to the documentation links in the article, I recommend the following:

The post Attrs, attrs, everywhere: The interaction between ATTRPRIORITY, CYCLEATTRS, and STYLEATTRS in ODS graphics appeared first on The DO Loop.