SAS enables you to evaluate a regression model at any location within the range of the data. However, sometimes you might be interested in how the predicted response is increasing or decreasing at specified locations. You can use finite differences to compute the slope (first derivative) of a regression model. This numerical approximation technique is most useful for nonparametric regression models that cannot be simply written in terms of an analytical formula.

A nonparametric model of drug absorption

The following data are the hypothetical concentrations of a drug in a patient's bloodstream at times (measured in hours) during a 72-hour period after the drug is administered. For a real drug, a pharmacokinetic researcher might construct a parametric model and fit the model by using PROC NLMIXED. The following example uses the EFFECT statement to fit a regression model that uses cubic splines. Other nonparametric models in SAS include loess curves, generalized additive models, adaptive regression, and thin-plate splines.

Because the data are not evenly distributed in time, a graph of the spline fit evaluated at the data points does not adequately show the response curve. Notice that the call to PROC GLMSELECT used a STORE statement to store the model to an item store. You can use PROC PLM to score the model on a uniform grid of values to visualize the regression model: 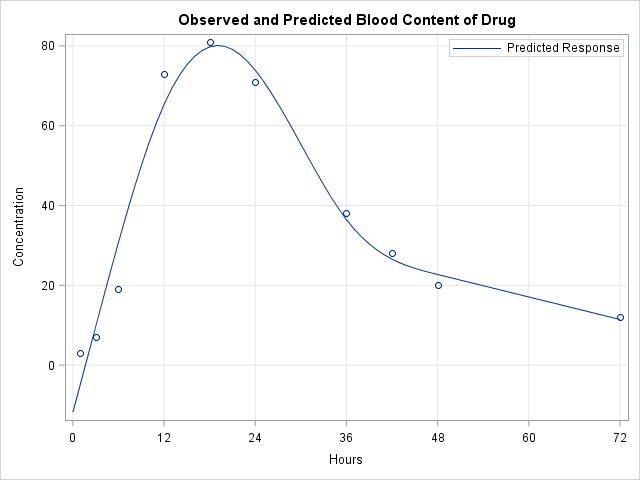 A researcher might be interested in knowing the slope of the regression curve at certain time points. The slope indicates the rate of change of the response variable (the blood-level concentration). Because nonparametric regression curves do not have explicit formulas, you cannot use calculus to compute a derivative. However, you can use finite difference formulas to compute a numerical derivative at any point.

There are several finite difference formulas for the first derivative. The forward and backward formulas are less accurate than the central difference formula. Let h be a small value. Then the approximate derivative of a function f at a point t is given by
f′(t) ≈ [ f(t + h) – f(t – h) ] / 2h

The formula says that you can approximate the slope at t by evaluating the model at the points t ± h. You can use the DIF function to compute the difference between the response function at adjacent time points and divide that difference by 2h. The code that scores the model is similar to the more-familiar case of scoring on a uniform grid. The following statements evaluate the derivative of the model at six-hour intervals. 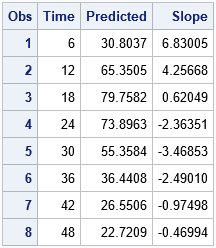 This technique generalizes to other nonparametric models. If you can score the model, you can use the central difference formula to approximate the first derivative in the interior of the data range.

For more about numerical derivatives, including a finite-difference approximation of the second derivative, see Warren Kuhfeld's article on derivatives for penalized B-splines. Warren's article is focused on how to obtain the predicted values that are generated by the built-in regression models in PROC SGPLOT (LOESS and PBSPLINE), but it contains derivative formulas that apply to any regression curve.

The post Compute derivatives for nonparametric regression models appeared first on The DO Loop.