A simulation in SAS

You can create a simulation to estimate the probability that two random chords intersect. The intersection of two segments can be detected by using either of the two SAS/IML modules in my article about the intersection of line segments. The following simulation generates four angles chosen uniformly at random in the interval (0, 2π). It converts those points to (x,y) coordinates on the unit circle. It then computes whether the chord between the first two points intersects the chord between the third and fourth points. It repeats this process 100,000 times and reports the proportion of times that the chords intersect.

This simulation produces an estimate that is close to the exact probability of 1/3.

This problem has an interesting connection to Bertrand's Paradox. Bertrand's paradox shows the necessity of specifying the process that is used to define the random variables in a probability problem. It turns out that there are multiple ways to define "random chords" in a circle, and the different definitions can lead to different answers to probability questions. See the Wikipedia article for an example.

For the definition of "random chords" in this problem, the density of the endpoints is uniform on the circle. After you make that choice, other distributions are determined. For example, the distribution of the lengths of 1,000 random chords is shown below. The lengths are NOT uniformly distributed! The theoretical density of the chord lengths is overlaid on the distribution of the sample. If you change the process by which chords are randomly chosen (for example, you force the lengths to be uniformly distributed), you might also change the answer to the problem, as shown in Bertrand's Paradox. 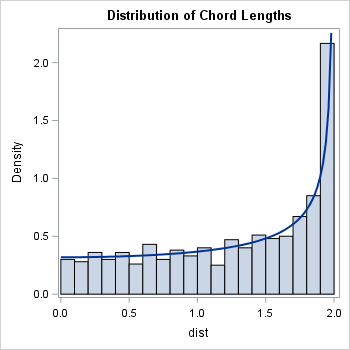 The post The probability that two random chords of a circle intersect appeared first on The DO Loop.