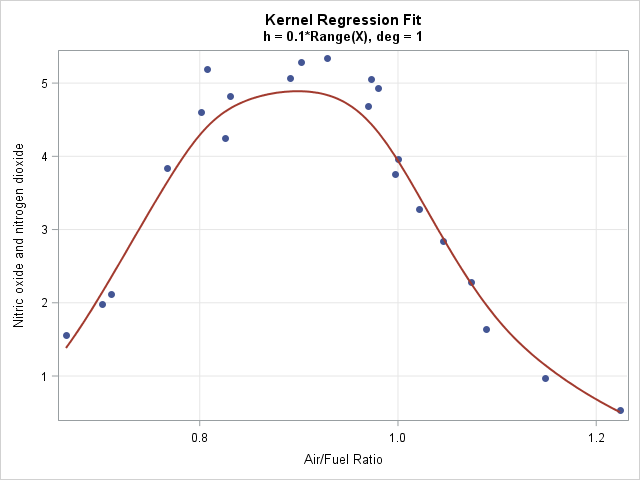 A kernel regression smoother is useful when smoothing data that do not appear to have a simple parametric relationship. The following data set contains an explanatory variable, E, which is the ratio of air to fuel in an engine. The dependent variable is a measurement of certain exhaust gasses (nitrogen oxides), which are contributors to the problem of air pollution. The scatter plot to the right displays the nonlinear relationship between these variables. The curve is a kernel regression smoother, which is developed later in this article.

What is kernel regression?

Kernel regression was a popular method in the 1970s for smoothing a scatter plot. The predicted value, ŷ0, at a point x0 is determined by a weighted polynomial least squares regression of data near x0. The weights are given by a kernel function (such as the normal density) that assigns more weight to points near x0 and less weight to points far from x0. The bandwidth of the kernel function specifies how to measure "nearness." Because kernel regression has some intrinsic problems that are addressed by the loess algorithm, many statisticians switched from kernel regression to loess regression in the 1980s as a way to smooth scatter plots.

To implement kernel regression, you can reuse the SAS/IML modules for weighted polynomial regression from a previous blog post. You use the PDF function to compute the local weights. The KernelRegression module computes the kernel regression at a vector of points, as follows:

The following statements load the data for exhaust gasses and sort them by the X variable (E). A call to the KernelRegression module smooths the data at 201 evenly spaced points in the range of the explanatory variable. The graph at the top of this article shows the smoother overlaid on a scatter plot of the data. 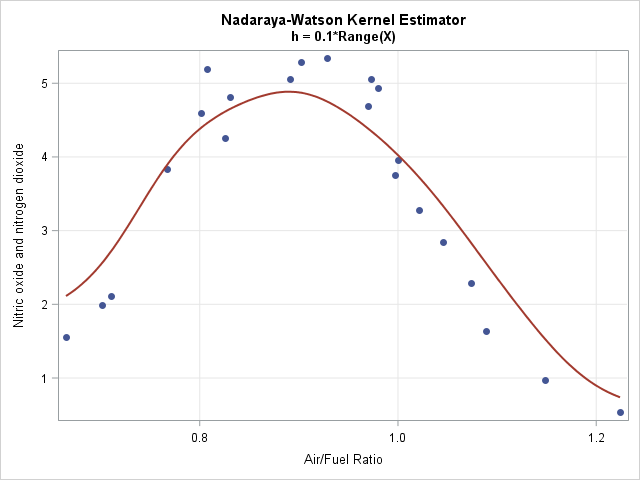 If you use a degree-zero polynomial to compute the smoother, each predicted value is a locally-weighted average of the data. This smoother is called the Nadaraya–Watson (N-W) kernel estimator. Because the N-W smoother is a weighted average, the computation is much simpler than for linear regression. The following two modules show the main computation. The N-W kernel smoother on the same exhaust data is shown to the right.

As mentioned earlier, there are some intrinsic problems with kernel regression smoothers:

Extensions of the simple kernel smoother

You can extend the one-dimensional example to more complex situations:

The post Kernel regression in SAS appeared first on The DO Loop.