The most popular way to mix a deck of cards is the riffle shuffle, which separates the deck into two pieces and interleaves the cards from each piece. Besides being popular with card players, the riffle shuffle is well-known among statisticians because Bayer and Diaconis (1992) showed that it takes seven riffle shuffles to randomize a 52-card deck. This result annoyed many recreational card players because shuffling seven times "slows down the game".

Mathematically, you can model an overhand shuffle by randomly choosing k cut points that separate the deck into k+1 "packets" of contiguous cards. The size of a packet can vary, as can the number of packets. The overhand shuffle reverses the order of the packets while preserving the order of the cards within each packet. When the packet sizes are small, the cards are mixed better than when the packets are bigger. 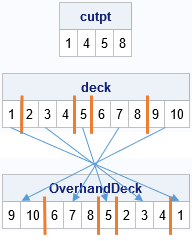 In a statistical model of the overhand shuffle, the cut points are assumed to be randomly chosen with probability p from among the N-1 possible locations between adjacent cards. An ideal overhand shuffle uses p = 1/2, which results in packets that are typically sized, 1, 2, and 3 (the packet size is geometrically distributed). However, among amateurs, the probability is much lower and an overhand shuffle reorders only a few large packets, which can lead to poor mixing of the cards.

I previously showed how to simulate a riffle shuffle in the SAS/IML language. The following program shows how to simulate an overhand shuffle. The deck of cards (represented as a vector of integers with the values 1 to N) is passed in, as is the probability of choosing a cut point. To test the program, I pass in a deck that has 10 cards enumerated by the integers 1–10. The new order of the deck was shown in the previous section.

Let's now consider the standard 52-card deck, represented by the integers 1–52. The following loop performs 10 overhand shuffles (p = 0.5) and uses a heat map to show the order of the cards after each shuffle: 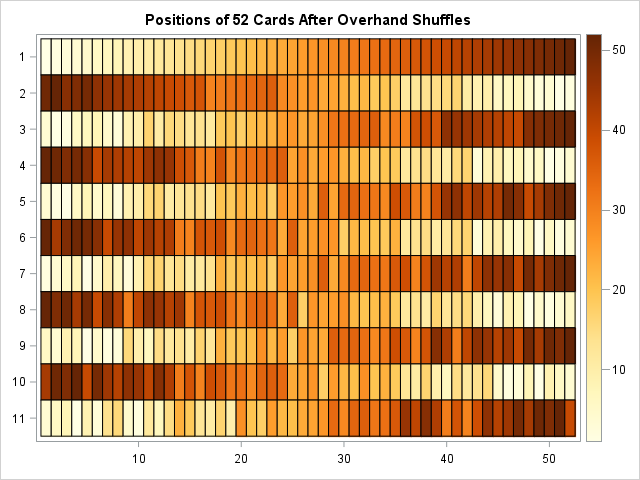 The cell colors in the heat map correspond to the initial position of the cards: light colors indicate cards that are initially near the top of the deck and dark colors represent cards that are initially near the bottom of the deck. The first row shows the initial positions of the cards in the deck. The second row shows the cards after one overhand shuffle. The third row shows the cards after two overhand shuffles, and so on. It is interesting to see how the pattern changes if you use p=0.25 or p=0.1. Try it!

Maybe additional overhand shuffles will address these deficiencies? The following program simulates 100 overhand shuffles. To aid in the visualization, the heat map shows only the results after 2, 4, 6, ..., and 100 shuffles (the even numbers): 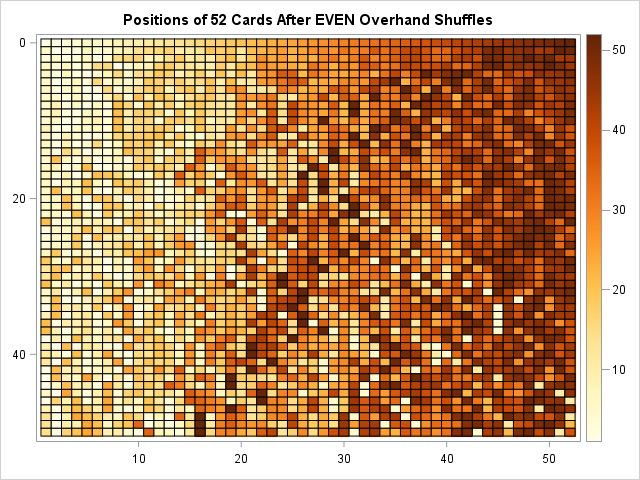 If you use smaller values of p (that is, the average packet size is larger), you will observe different patterns. The theory says that large packets cause nearby cards to tend to stay together for many shuffles. Jonasson (2006) was able to prove that if a deck has N cards, then O(N2 log(N)) overhand shuffles are required to randomize the deck. This compares with (3/2) log2(N) for the riffle shuffle, which is presented in the next section.

A comparison with the riffle shuffle 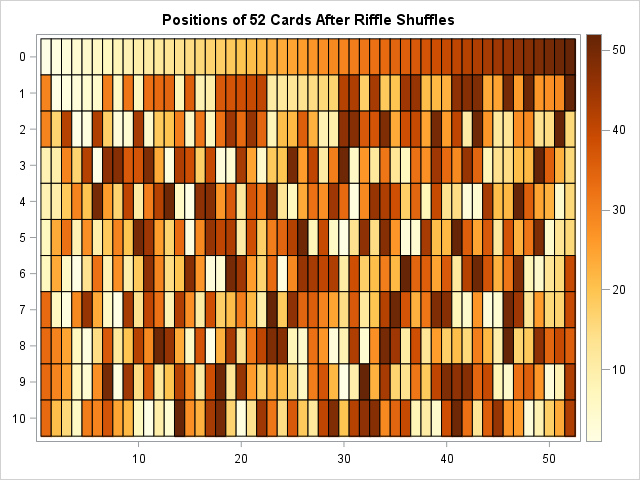 The heat map shows how quickly a riffle shuffle randomizes a deck. The last row (after 10 riffles) shows that light-colored cells are distributed throughout the deck, as are dark-colored cells and medium-colored cells. Furthermore, this behavior seems to occur after six or seven rows (at least to my untrained eye). I cannot see much difference between the "randomness" in row 6 and row 10. However, theoretically, a card in an earlier row (say, row 5) is more likely to be near cards that were initially close to it. For example, a dark-colored cell in row 5 is more likely to be near another dark-colored cell than would be expected in a randomized deck. However, by the time you perform 7 or more riffle shuffles, two cards that started near each other might be located far apart or might be close to each other. You cannot predict which will occur because the cards have been randomized.

In summary, the overhand shuffle does not mix cards very well. The simulation indicates that an overhand shuffle is not effective at separating cards that begin near each other. Even after 100 overhand shuffles (with p=0.5), the positions of many cards are only slightly different from their initial positions. In contrast, a riffle shuffle is an effective way to randomize a deck in approximately seven shuffles.

The post Shuffling smackdown: Overhand shuffle versus riffle shuffle appeared first on The DO Loop.