The AR(1) correlation structure is used in statistics to model observations that have correlated errors. (For example, see the documentation of PROC MIXED in SAS.) If Σ is AR(1) correlation matrix, then its elements are constant along diagonals. The (i,j)th element of an AR(1) correlation matrix has the form Σ[i,j] = ρ|i – j|, where ρ is a constant that determines the geometric rate at which correlations decay between successive time intervals. The exponent for each term is the L1 distance between the row number and the column number. As I have shown in a previous article, you can use the DISTANCE function in SAS/IML 14.3 to quickly evaluate functions that depend on the distance between two sets of points. Consequently, the following SAS/IML function computes the correlation matrix for a p x p AR(1) matrix: 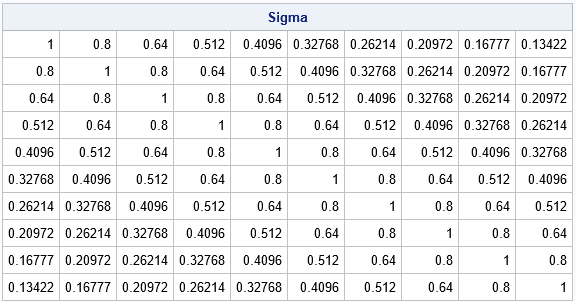 Every covariance matrix has a Cholesky decomposition, which represents the matrix as the crossproduct of a triangular matrix with itself: Σ = RTR, where R is upper triangular. In SAS/IML, you can use the ROOT function to compute the Cholesky root of an arbitrary positive definite matrix. However, the AR(1) correlation matrix has an explicit formula for the Cholesky root in terms of ρ. This explicit formula does not appear to be well known by statisticians, but it is a special case of a general formula developed by V. Madar (Section 5.1, 2016), who presented a poster at a Southeast SAS Users Group (SESUG) meeting a few years ago. An explicit formula means that you can compute the Cholesky root matrix, R, in a direct and efficient manner, as follows: 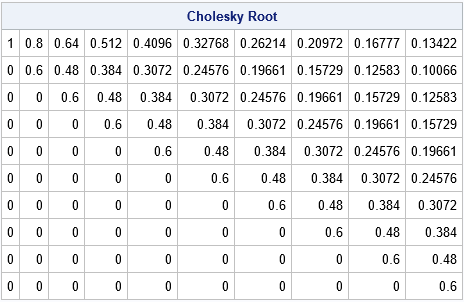 An efficient way to simulate data from a multivariate normal population with covariance Σ is to use the Cholesky decomposition to induce correlation among a set of uncorrelated normal variates. This is the technique used by the RandNormal function in SAS/IML software. Internally, the RandNormal function calls the ROOT function, which can compute the Cholesky root of an arbitrary positive definite matrix.

When there are thousands of variables, the Cholesky decomposition might take a second or more. If you call the RandNormal function thousands of times during a simulation study, you pay that one-second penalty during each call. For the AR(1) covariance structure, you can use the explicit formula for the Cholesky root to save a considerable amount of time. You also do not need to explicitly form the p x p matrix, Σ, which saves RAM. The following SAS/IML function is an efficient way to simulate N observations from a p-dimensional multivariate normal distribution that has an AR(1) correlation structure with parameter ρ:

The previous loop generates a sample that contains N=500 observations and p=1000 variables. Each sample is from a multivariate normal distribution that has an AR(1) correlation, but each sample is generated for a different value of ρ, where ρ = 0.01. 0.02, ..., 0.99. On my desktop computer, this simulation of 100 correlated samples takes about 4 seconds. This is about 25% of the time for the same simulation that explicitly forms the AR(1) correlation matrix and calls RandNormal.

The post Fast simulation of multivariate normal data with an AR(1) correlation structure appeared first on The DO Loop.