A SAS programmer asked how to rearrange elements of a matrix. The rearrangement he wanted was rather complicated: certain blocks of data needed to move relative to other blocks, but the values within each block were to remain unchanged. It turned out that the mathematical operation he needed is called a block transpose. The BTRAN function in SAS/IML performs block-transpose operations, so the complicated rearrangement was easy to implement with a judicious call to the BTRAN function.

This article discusses the block-transpose operation and gives an example. It also shows how a block transpose can conveniently transform wide data into long data and vice versa.

In general, a block matrix can contain blocks of various sizes. However, the BTRAN function requires that all blocks be the same size. Specifically, suppose A is a block matrix where each block is an n x m matrix. That means that A is an (r n) x (c m) matrix for some whole numbers r and c. The BTRAN function transposes the blocks to create a (c n) x (r m) block matrix.

The idea is more easily explained by a picture. The following image shows a matrix A that is composed of six blocks (of the same size). The block-transpose operation rearranges the blocks but leaves the elements within the blocks unchanged.

The BTRAN function in SAS/IML

Let's see how the block transpose works on an example in the SAS/IML language. The following statements create a 4 x 12 matrix. I have overlaid some grid lines to help you visualize this matrix as a 2 x 3 block matrix, where each block is 2 x 4.

You can use the BTRAN function to apply a block transpose. The first argument is the matrix that contains the data. The second and third arguments specify the size of the blocks: 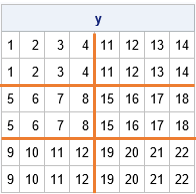 If the number of rows in the block equals the number of rows in the data, then the BTRAN function stacks columns. In particular, if the block size is n x 1, the BTRAN function stacks multiple variables into a single column, just like the SHAPECOL function. For example, the Sashelp.Iris data contains four variables named SepalLength, SepalWidth, PetalLength, and PetalWidth. The following SAS/IML statements stack the four variables into a single column and create a new column that identifies the name of the original variable: 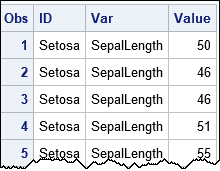 In a similar way, you can transpose balanced data from long form to wide form. (Recall that "balanced data" means that each group has the same number of observations.) For example, the Sashelp.Iris data contains a Species variable. The first 50 observations have the value 'Setosa', the next 50 have the value 'Versicolor', and the last 50 have the value 'Virginica'. You can use a WHERE clause or a BY statement to analyze each species separately, but suppose you want to create a new data set that contains only 50 observations and has variables named SepalLengthSetosa, SepalLengthVersicolor, SepalLengthVirginica, and so forth for the other variables. The BTRAN function makes this easy: just specify a block size of 50 x 4, as follows.

The post Transpose blocks to reshape data appeared first on The DO Loop.