It is common to use colors or symbols to indicate which observations belong to each category of a grouping variable. Typical grouping variables include gender (male and female), political affiliation (democrats, republicans, and independents), race, education level, and so forth. When you use the SAS SG procedures to plot subsets of the data, there are three ways to arrange the plots. You can plot each group individually, you can create a panel of graphs, or you can overlay the groups on a single graph:

The following SAS statements demonstrate each approach. Only the GROUP= overlay is displayed because that is the topic of this article: 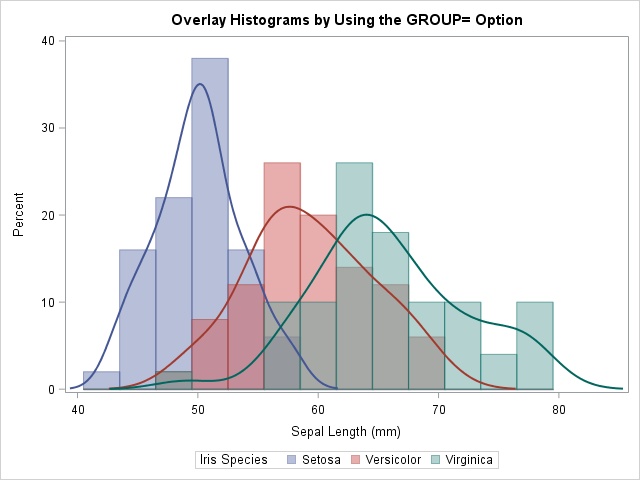 How to emulate the GROUP= option

Here is a trick (shown to me by my colleague, Paul) that you can use to emulate the GROUP= option. If a statement in the SGPLOT procedure does not support the GROUP= option, but the statement DOES support the FREQ= option, you can often use the FREQ= option to construct a graph that overlays the subgroups. You need to do two things. First, you need to create binary indicators variables (sometimes called dummy variables) for each level of the categorical variable. You then use multiple statements, each with a different frequency variable, to overlay the subgroups. These two steps are shown by the following DATA step and call to PROC SGPLOT, which uses the FREQ= trick to overlay three histograms: 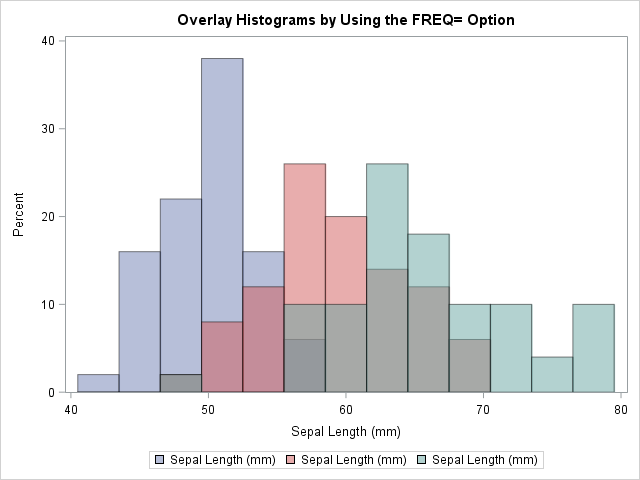 The graph overlays three histograms, one for each value of the Species variable. The result is similar to the earlier graph that used the GROUP= option. You can use the same trick on the DENSITY statement, although you will need to manually set the line attributes so that they match the attributes for the corresponding histograms.

Several years ago I showed how you can overlay prediction ellipses for each group on a scatter plot. (Note that the ELLIPSE statement does not support a GROUP= option.) The technique requires that you transpose the data from long to wide form by creating new variables, one for each group of the categorical variable. Paul recognized that creating a dummy variable and using the FREQ= option is a simpler way to overlay prediction ellipses on a scatter plot: 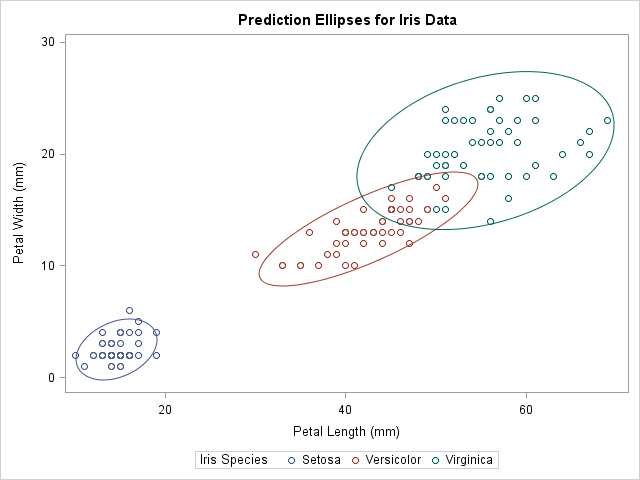 Advantages and disadvantages of the FREQ= trick

The main advantage of using the FREQ= option for group processing is that it enables you to overlay subgroups even when a statement does not support the GROUP= option. A secondary advantage is that this technique gives you complete control of the attributes of each subgroup. Although you can use the STYLEATTRS statement to control many group attributes, the STYLEATTTRS statement does not enable you to control marker sizes or line widths, to name two examples.

The FREQ= trick does have some disadvantages:

I thank my colleague, Paul, for showing me the ellipse example. I hope you agree that this trick is a real treat, not just on Halloween, but every day!

The post A trick to plot groups in PROC SGPLOT appeared first on The DO Loop.