The SGPLOT procedure enables you to use the value of a response variable to color markers or areas in a graph. For example, you can use the COLORRESPONSE= option to define a variable whose values will be used to color markers in a scatter plot or cells in a heat map. You can use the COLORMODEL= statement to use a pre-defined color ramp or to define and use a custom color ramp. These options are often used to visualize a "third variable" (Z) in a two-dimensional plot (Y vs X).

However, the SGPLOT procedure is not the only way to create color ramps. Recently, I needed to create a custom color ramp and specify a color for values that were outside of a certain range. I also needed to change the color used for missing values in the response variable. This article shows how to perform these tasks by using the RANGEATTRMAP statement in the SAS Graph Template Language (GTL). 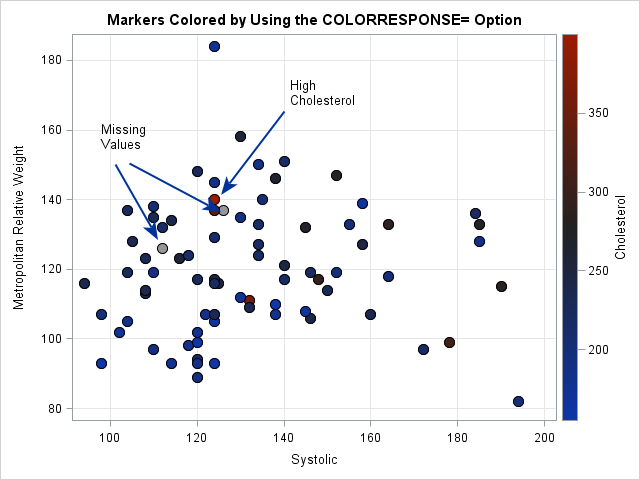 SAS provides several ways to visualize the values of a response variable in scatter plots, contour plots, heat maps, and other graphs. An example is shown to the right. In this scatter plot, the markers represent data for patients in a heart study. The two-dimensional coordinates of the markers represent the systolic blood pressure and the MRW ratio (a body-mass index) of 80 patients. The colors indicate measurements of cholesterol. Three observations are highlighted by using arrows. One point has an extreme value of cholesterol (400). Two others have missing values of cholesterol and are shown in a grey color by default.

The SGPLOT option provide basic functionality for creating a custom color ramp. For more control, you can use either of the following advanced techniques:

Although the documentation discusses it, I was initially confused about the difference between color ramps and "alt" color ramps. I erroneously assumed that they are functionally equivalent. After all, when I use the COLORMODEL= option in PROC SGPLOT, I can choose any predefined color ramp. For example, the graph at the start of this article is created by using COLORMODEL=ThreeAltColorRamp, which is a blue-black-red color ramp. However, I could just as easily specify COLORMODEL=ThreeColorRamp to use a blue-white-red color ramp.

The following GTL defines a template that creates a scatter plot that is similar to the one at the beginning of this article. Because I want to color markers, I use the RANGEALTCOLOR= and RANGEALTCOLORMODEL= options. The RANGEATTRMAP statement contains three RANGE statements. Each RANGE statement associates a color or colors with ranges of data values: 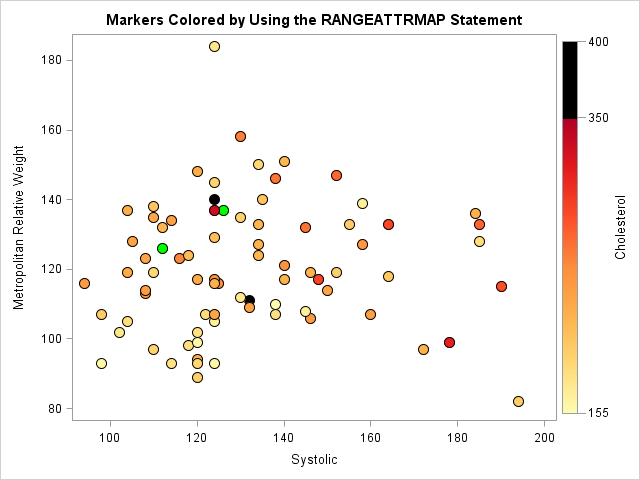 The post Define custom color ramps by using the RANGEATTRMAP statement in GTL appeared first on The DO Loop.