This article shows how to use SAS to simulate data that fits a linear regression model that has categorical regressors (also called explanatory or CLASS variables). Simulating data is a useful skill for both researchers and statistical programmers. You can use simulation for answering research questions, but you can also use it generate "fake" (or "synthetic") data for a presentation or blog post when the real data are confidential. I have previously shown how to use SAS to simulate data for a linear model and for a logistic model, but both articles used only continuous regressors in the model.

This discussion and SAS program are based on Chapter 11 in Simulating Data with SAS (Wicklin, 2013, p. 208-209). The main steps in the simulation are as follows. The comments in the SAS DATA program indicate each step: 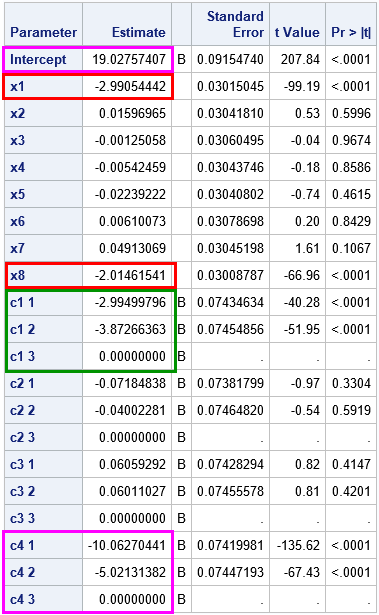 The ModelANOVA table from PROC GLM (not shown) displays the Type 3 sums of squares and indicates that the significant terms in the model are x1, x8, c1, and c4.

The parameter estimates from PROC GLM are shown to the right. You can see that each categorical variable has three levels, and you can use PROC FREQ to verify that the levels are uniformly distributed. I have highlighted parameter estimates for the significant effects in the model:

Although this program simulates a linear regression model, you can modify the program and simulate from a generalized linear model such as the logistic model. You just need to compute the linear predictor, eta (η), and then use the link function and the RAND function to generate the response variable, as shown in a previous article about how to simulate data from a logistic model.

In summary, this article shows how to simulate data for a linear regression model in the SAS DATA step when the model includes both categorical and continuous regressors. The program simulates arbitrarily many continuous and categorical variables. You can define a response variable in terms of the explanatory variables and their interactions.

The post Simulate data for a regression model with categorical and continuous variables appeared first on The DO Loop.