Have you ever run a regression model in SAS but later realize that you forgot to specify an important option or run some statistical test? Or maybe you intended to generate a graph that visualizes the model, but you forgot? Years ago, your only option was to modify your program and rerun it. Current versions of SAS support a less painful alternative: you can use the STORE statement in many SAS/STAT procedures to save the model to an item store. You can then use the PLM procedure to perform many post-modeling analyses, including performing hypothesis tests, showing additional statistics, visualizing the model, and scoring the model on new data. This article shows four ways to use PROC PLM to obtain results from your regression model.

What is PROC PLM?

For an introduction to PROC PLM, see "Introducing PROC PLM and Postfitting Analysis for Very General Linear Models" (Tobias and Cai, 2010). The documentation for the PLM procedure includes more information and examples.

To use PROC PLM you must first use the STORE statement in a regression procedure to create an item store that summarizes the model. The following procedures support the STORE statement: GEE, GENMOD, GLIMMIX, GLM, GLMSELECT, LIFEREG, LOGISTIC, MIXED, ORTHOREG, PHREG, PROBIT, SURVEYLOGISTIC, SURVEYPHREG, and SURVEYREG.

The LOGISTIC procedure models the presence of pain based on a patient's medication (Drug A, Drug B, or placebo), gender, age, and duration of pain. After you fit the model and store it, you can use PROC PLM to perform all sorts of additional analyses, as shown in the subsequent sections.

An important application of regression models is to predict the response variable for new data. The following DATA step defines three new patients. The first two are females who are taking Drug B. The third is a male who is taking Drug A:

Notice that the PROC PLM statement does not use the original data. In fact, the procedure does not support a DATA= option but instead uses the RESTORE= option to read the item store. The PLM procedure cannot create plots or perform calculations that require the data because the data are not part of the item store.

Use PROC PLM to visualize the model 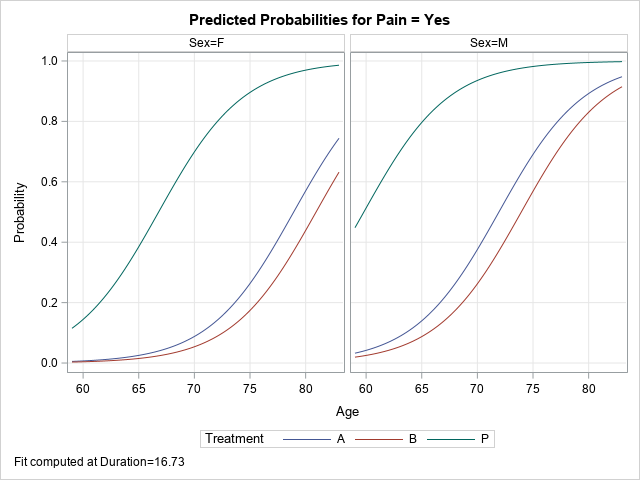 Use PROC PLM to compute contrasts and other estimates

One of the main purposes of PROC PLM Is to perform postfit estimates and hypothesis tests. The simplest is a pairwise comparison that estimates the difference between two levels of a classification variable. For example, in the previous graph the probability curves for the Drug A and Drug B patients are close to each other. Is there a significant difference between the two effects? The following ESTIMATE statement estimates the (B vs A) effect. The EXP option exponentiates the estimate so that you can interpret the 'Exponentiated' column as the odds ratio between the drug treatments. The CL option adds confidence limits for the estimate of the odds ratio. The odds ratio contains 1, so you cannot conclude that Drug B is significantly more effective that Drug A at reducing pain.

Use PROC PLM to display statistics from the analysis

One of the more useful features of PROC PLM is that you can use the SHOW statement to display tables of statistics from the original analysis. If you want to see the ParameterEstimates table again, you can do that (SHOW PARAMETERS). You can even display statistics that you did not compute originally, such as an estimate of the covariance of the parameters (SHOW COVB). Lastly, if you have the item store but have forgotten what program you used to generate the model, you can display the program (SHOW PROGRAM). The following statements demonstrate the SHOW statement. The results are not shown.

In summary, the STORE statement in many SAS/STAT procedures enables you to store various regression models into an item store. You can use PROC PLM to perform additional postfit analyses on the model, including scoring new data, visualizing the model, hypothesis testing, and (re)displaying additional statistics. This technique is especially useful for long-running models, but it is also useful for confidential data because the data are not needed for the postfit analyses.

The post 4 reasons to use PROC PLM for linear regression models in SAS appeared first on The DO Loop.