Calibration plots for a model of a binary response 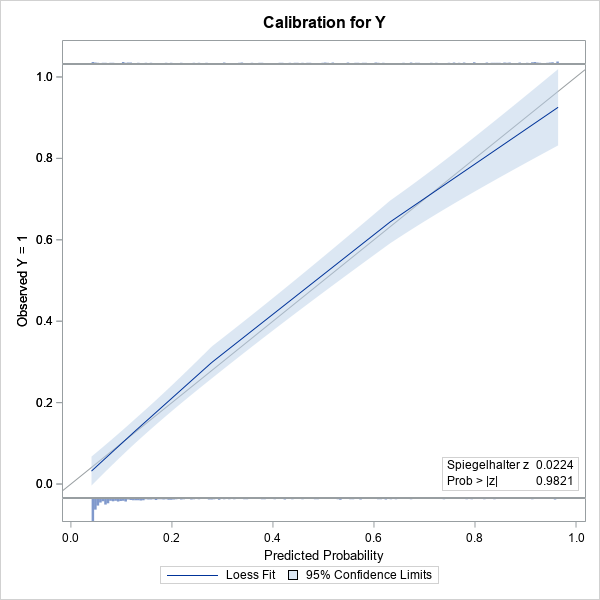 The calibration plot is shown. (Click to enlarge.) The plot contains a gray diagonal line, which represents perfect calibration. If most of the predicted responses agree with the observed responses, then the blue curve should be close to the diagonal line. That is the case in this example. The light blue band is a 95% confidence region for the loess fit and is created by using the CLM option.

Because I used the SHOWOBS option, the calibration plot displays tiny histograms along the top and bottom of the plot. The histograms indicate the distribution of the Y=0 and Y=1 responses. The article "Use a fringe plot to visualize binary data in logistic models" explains more about how fringe plots can add insight to graphs that involve a binary response variable. 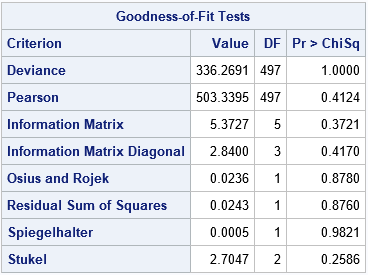 Calibration plots for a polytomous response

An exciting feature of the calibration plots in PROC LOGISTIC is that you can use them for a polytomous response model. Derr (2013) ﬁts a proportional odds model that predicts the probability of the severity of black-lung disease from the length of exposure to coal dust in 371 coal miners. The response variable, Severity, has the levels 'Severe', 'Moderate', and 'Normal'. The following statement create the data and model and request calibration plots for the model. 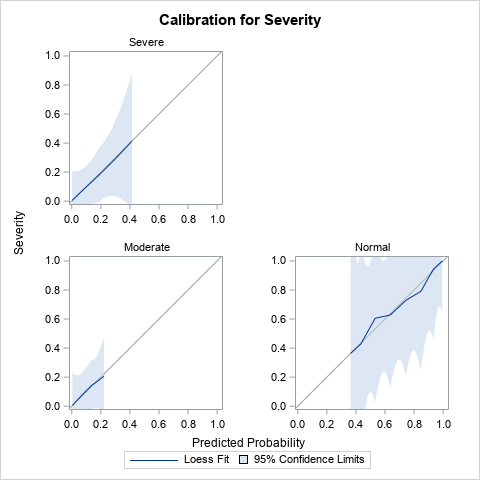 Derr (2013) discusses the results of the analysis, which are not shown here. I've displayed only the calibration plot for the model. Notice that PROC LOGISTIC creates a panel of three calibration plots, one for each response level. The calibration curves all lie close to the diagonal, so the diagnostic plots do not indicate a lack of calibration for any part of the model.

You can download the SAS code used in this article, which includes SAS code that demonstrates how to create a calibration plot manually.

The post An easier way to create a calibration plot in SAS appeared first on The DO Loop.