Statisticians often emphasize the dangers of extrapolating from a univariate regression model. A common exercise in introductory statistics is to ask students to compute a model of population growth and predict the population far in the future. The students learn that extrapolating from a model can result in a nonsensical prediction, such as trillions of people or a negative number of people! The lesson is that you should be careful when you evaluate a model far beyond the range of the training data.

You can use a bivariate example to illustrate the difference between the convex hull of the data and the bounding box for the data, which is the rectangle [Xmin, Xmax] x [Ymin, Ymax]. The following SAS DATA step defines two explanatory variables (X and Y) and one response variable (Z). The SGPLOT procedure shows the distribution of the (X, Y) variables and colors each marker according to the response value: 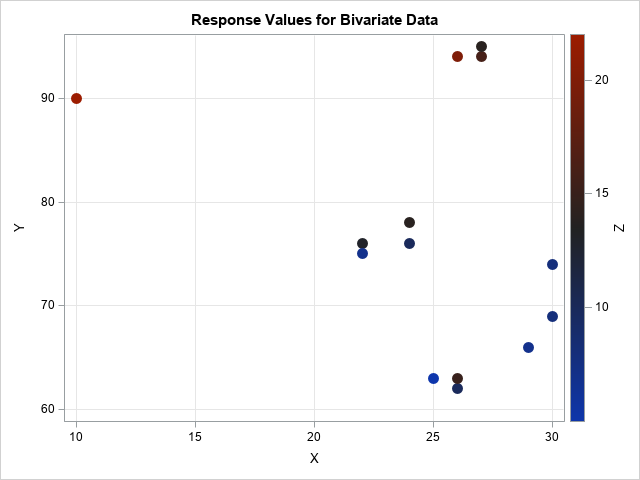 The data are observed in a region that is approximately triangular. No observations are near the lower-left corner of the plot. If you fit a response surface to this data, it is likely that you would visualize the model by using a contour plot or a surface plot on the rectangular domain [10, 30] x [62, 95]. For such a model, predicted values near the lower-left corner are not very reliable because the corner is far from the data.

In general, you should expect less accuracy when you predict the model "outside" the data (for example, (10, 60)) as opposed to points that are "inside" the data (for example, (25, 70)). This concept is sometimes discussed in courses about the design of experiments. For a nice exposition, see the course notes of Professor Rafi Hafka (2012, p. 49–59) at the University of Florida.

The convex hull of bivariate points

You can represent the points by using an N x 2 matrix, where each row is a 2-D point. When you call the CVEXHULL function, you obtain a vector of N integers. The first few integers are positive and represent the rows of the matrix that comprise the convex hull. The (absolute value of) the negative integers represents the rows that are interior to the convex hull. This is illustrated for the sample data:

The output shows that the observation numbers (indices) that form the convex hull are {1, 6, 7, 12, 13, 14, 11}. The other observations are in the interior. You can visualize the interior and boundary points by forming a binary indicator vector that has the value 1 for points on the boundary and 0 for points in the interior. To get the indicator vector in the order of the data, you need to use the SORTNDX subroutine to compute the anti-rank of the indices, as follows: 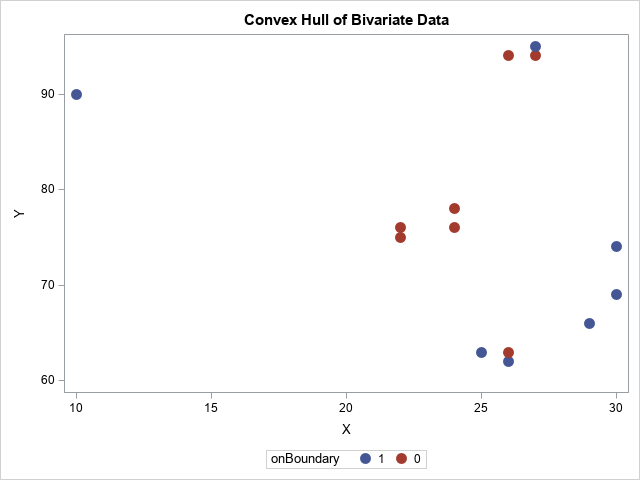 The blue points are the boundary of the convex hull whereas the red points are in the interior.

Visualize the convex hull as a polygon

You can visualize the convex hull by forming the polygon that connects the first, sixth, seventh, ..., eleventh observations. You can do this manually by using the POLYGON statement in PROC SGPLOT, which I show in the Appendix section. However, there is an easier way to visualize the convex hull. I previously wrote about SAS/IML packages and showed how to install the polygon package. The polygon package contains a module called PolyDraw, which enables you to draw polygons and overlay a scatter plot. 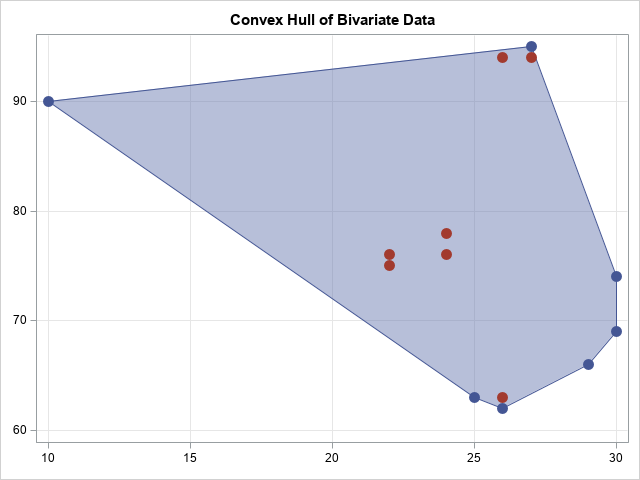 The graph shows the convex hull of the data. You can see that it primarily occupies the upper-right portion of the rectangle. The convex hull shows the interpolation region for regression models. If you evaluate a model outside the convex hull, you are extrapolating. In particular, even though points in the lower left corner of the plot are within the bounding box of the data, they are far from the data.

Of course, if you have 5, 10 or 100 explanatory variables, you will not be able to visualize the convex hull of the data. Nevertheless, the same lesson applies. Namely, when you evaluate the model inside the bounding box of the data, you might be extrapolating rather than interpolating. Just as in the univariate case, the model might predict nonsensical data when you extrapolate far from the data.

Packages are supported in SAS/IML 14.1. If you are running an earlier version of SAS, you create the same graph by writing the polygon data and the binary indicator variable to a SAS data set, as follows:

The resulting graph is similar to the one produced by the PolyDraw modules and is not shown.

The post Interpolation vs extrapolation: the convex hull of multivariate data appeared first on The DO Loop.