What is a quadratic form? 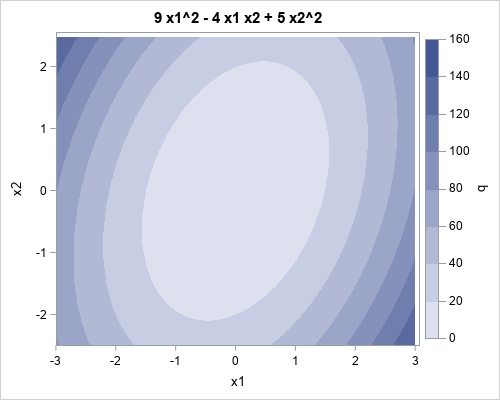 Probably the most familiar quadratic form is the squared Euclidean distance. If you let A be the d-dimensional identity matrix, then the squared Euclidean distance of a vector x from the origin is x` Id x = x` x = Σi xi2. You can obtain a weighted squared distance by using a diagonal matrix that has positive values. For example, if W = diag({2, 4}), then x` W x = 2*x12 + 4*x22. If you add in off-diagonal elements, you get cross terms in the polynomial.

Efficient evaluation of a quadratic form

If the matrix A is dense, then you can use matrix multiplication to evaluate the quadratic form. The following symmetric 3 x 3 matrix defines a quadratic polynomial in 3 variables. The multiplication evaluates the polynomial at (x1, x2, x3) = (-1. 2. 0.5).

In statistics, the matrix is often symmetric positive definite (SPD). The matrix A might be a covariance matrix (for a nondegenerate system), the inverse of a covariance matrix, or the Hessian evaluated at the minimum of a function. (Recall that the inverse of a symmetric positive definite (SPD) matrix is SPD.) An important example is the squared Mahalanobis distance x` Σ-1 x, which is a quadratic form.

As I have previously written, you can use a trick in linear algebra to efficiently compute the Mahalanobis distance. The trick is to compute the Cholesky decomposition of the SPD matrix. I'll use a large Toeplitz matrix, which is guaranteed to be symmetric and positive definite, to demonstrate the technique. The function EvalSPDQuadForm evaluates a quadratic form defined by the SPD matrix A at the coordinates given by x:

You might wonder how much time is saved by using the Cholesky root and triangular solvers, rather than by computing the general solution by using the SOLVE function. The following graph compares the average time to evaluate the same quadratic form by using both methods. You can see that for large matrices, the ROOT-TRISOLV method is many times faster than the straightforward method that uses SOLVE. 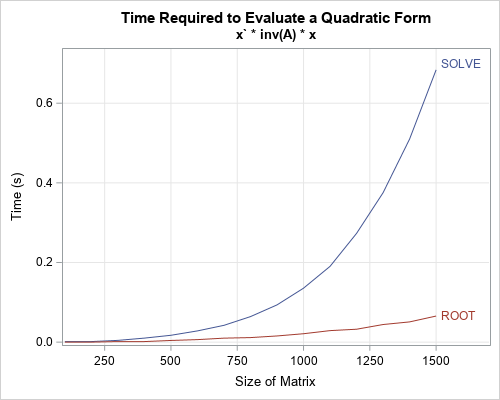 In summary, you can use several tricks in numerical linear algebra to efficiently evaluate a quadratic form, which is a multivariate quadratic polynomial that contains only second-degree terms. These techniques can greatly improve the speed of your computational programs.

The post Efficient evaluation of a quadratic form appeared first on The DO Loop.