I think every course in exploratory data analysis should begin by studying Anscombe's quartet. Anscombe's quartet is a set of four data sets (N=11) that have nearly identical descriptive statistics but graphical properties. They are a great reminder of why you should graph your data. You can read about Anscombe's quartet on Wikipedia, or check out a quick visual summary by my colleague Robert Allison. Anscombe's first two examples are shown below:

The Wikipedia article states, "It is not known how Anscombe created his data sets." Really? Creating different data sets that have the same statistics sounds like a fun challenge! As a tribute to Anscombe, I decided to generate my own versions of the two data sets shown in the previous scatter plots. The first data set is linear with normal errors. The second is quadratic (without errors) and has the exact same linear fit and correlation coefficient as the first data.

Generating your own version of Anscombe's data

The Wikipedia article notes that there are "several methods to generate similar data sets with identical statistics and dissimilar graphics," but I did not look at the modern papers. I wanted to try it on my own. If you want to solve the problem on your own, stop reading now!

I used the following approach to construct the first two data sets:

You can construct the first data set in a number of ways, but I choose to construct it randomly. The following SAS/IML statements construct the data, defines a helper function (LinearReg). The program computes the target values, which are the parameter estimates for a linear regression and the sample correlation for the data:

You can use these values as the target values. The next step is to find a parameter vector β such that Y2 = β0 + β1 X + β2 X2 has the same regression line and corr(Y2, X) has the same sample correlation. For uniqueness, set β2 < 0.

You can formulate the problem as a system of equations and use the NLPHQN subroutine in SAS/IML to solve it. (SAS supports multiple ways to solve a system of equations.) The following SAS/IML statements define two functions. Given any value for the β parameter, the first function returns the regression estimates and sample correlation between Y2 and X. The second function is the objective function for an optimization. It subtracts the target values from the estimates. The NLPHQN subroutine implements a hybrid quasi-Newton optimization routine that uses least squares techniques to find the β parameter that generates quadratic data that tries to match the target statistics. 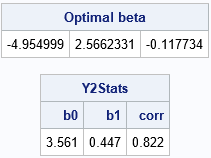 The first output shows that the linear fit and correlation statistics for the linear and quadratic data are identical (to 3 decimal places). Anscombe would be proud! The second output shows the parameters for the quadratic response: Y2 = 4.955 + 2.566*X - 0.118*X2. The following statements create scatter plots of the new Anscombe-like data:

What about the other data sets?

You can create the other data sets similarly. For example:

In summary, you can solve a system of equations to construct data similar to Anscombe's quartet. By using this technique, you can create your own data sets that share descriptive statistics but look very different graphically.

To be fair, the technique I've presented does not enable you to reproduce Anscombe's quartet in its entirety. My data share a linear fit and sample correlation, whereas Anscombe's data share seven statistics!

Anscombe was a pioneer (along with Tukey) in using computation to assist in statistical computations. He was also enamored with the APL language. He introduced computers into the Yale statistics department in the mid-1960s. Since he published his quartet in 1973, it is possible that he used computers to assist his creation of the Anscombe quartet. However he did it, Anscombe's quartet is truly remarkable!

You can download the SAS program that creates the results in this article.

The post Create your own version of Anscombe's quartet: Dissimilar data that have similar statistics appeared first on The DO Loop.