Do you have a favorite television show? Or a favorite movie franchise that you follow? If you call yourself a "fan," just how much of a fan are you? Are you merely a spectator, or do you take your fanaticism to the next level by creating something new?

When it comes to fandom for franchises like Game of Thrones, the Marvel movies, or Stranger Things, there's a new kind of nerd in town. And this nerd brings data science skills. You've heard of the "second screen" experience for watching television, right? That's where fans watch a show (or sporting event or awards ceremony), but also keep up with Twitter or Facebook so they can commune with other fans of the show on social media. These fan-data-scientists bring a third screen: their favorite data workbench IDE.

I was recently lured into into a rabbit hole of Game of Thrones data by a tweet. The Twitter user was reacting to a data visualization of character screen time during the show. The visualization was built in a different tool, but the person was wondering whether it could be done in SAS. I knew the answer was Yes...as long as we could get the data. That turned out to be the easiest part.

WARNING: While this blog post does not reveal any plot points from the show, the data does contain spoilers! No spoilers in what I'm showing here, but if you run my code examples there might be data points that you cannot "unsee." I was personally conflicted about this, since I'm a fan of the show but I'm not yet keeping up with the latest episodes. I had to avert my eyes for the most recent data.

A GitHub user named Jeffrey Lancaster has shared a repository for all aspects of data around Game of Thrones. He also has similar repos for Stranger Things and Marvel universe. Inside that repo there's a JSON file with episode-level data for all episodes and seasons of the show. With a few lines of code, I was able to read the data directly from the repo into SAS:

Note that I've shared all of my code for my steps in my own GitHub repo (just trying to pay it forward). Everything should work in Base SAS, including in SAS University Edition.

The JSON library reads the data into a series of related tables that show all of the important things that can happen to characters within a scene. Game of Thrones fans know that death, sex, and marriage (in that order) make up the inflection points in the show. 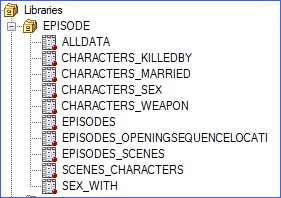 With a little bit of data prep using SQL, I was able to show the details of the on-screen time per character, per scene. These are the basis of the visualization I was trying to create.

With a few more data prep steps (see my code on GitHub), I was able to summarize the screen time for scene locations: 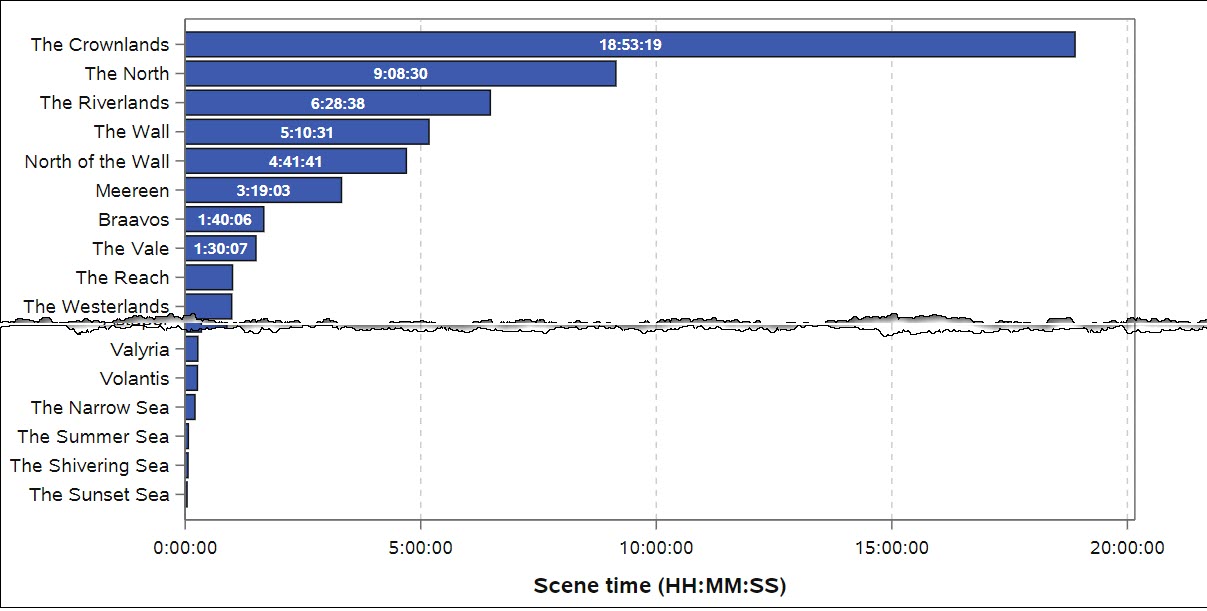 You can see that The Crownlands dominate as a location. In the show that's a big region and a sort of headquarters for The Seven Kingdoms, and the show data actually includes "sub-locations" that can help us to break that down. Here's the makeup of that 18+ hours of time in The Crownlands: 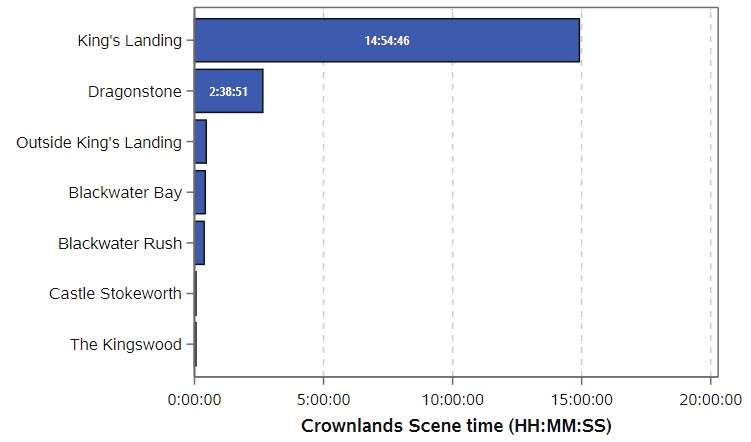 My goal is to show how much screen time each of the major characters receives, and how that changes over time. I began by creating a series of charts using PROC SGPLOT. These were created using a single SGPLOT step using a BY group, segmented by show episode. They appear in a grid because I used ODS LAYOUT GRIDDED to arrange them. 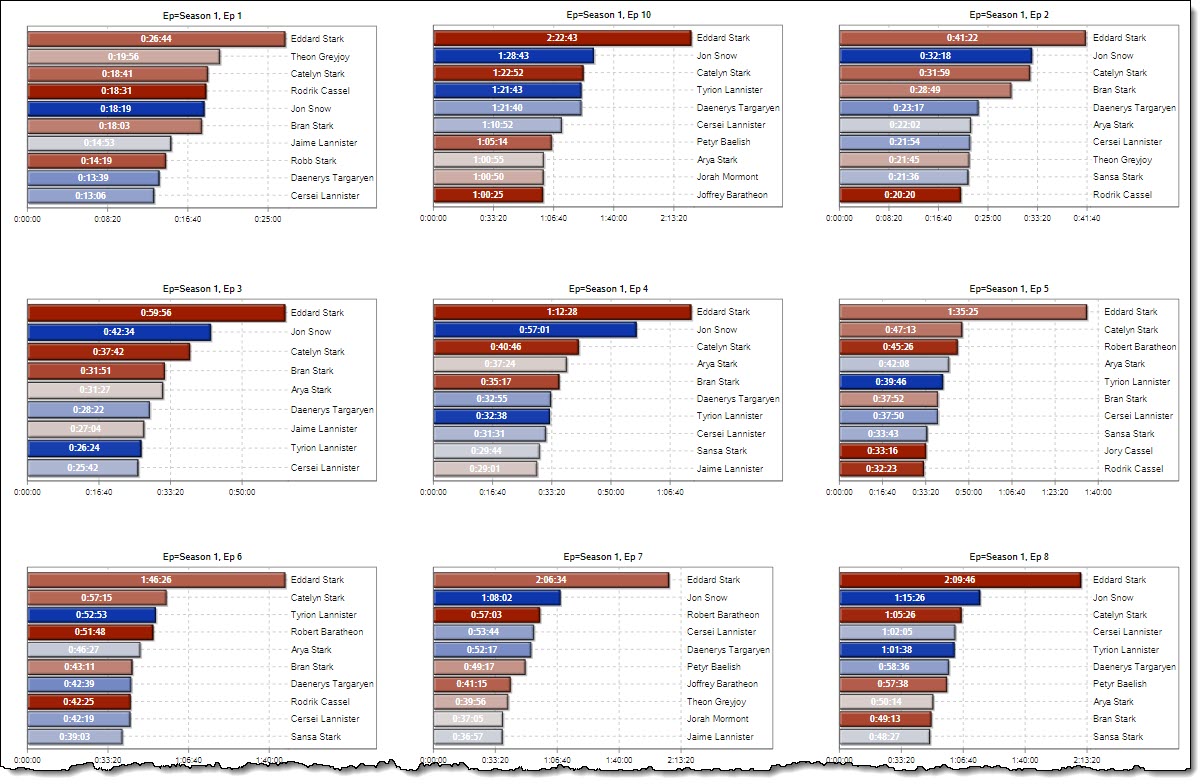 Here's the code segment that creates these dozens of charts. Again, see my GitHub for the intermediate data prep work.

The example shared on Twitter showed an animation of screen time, per character, over the complete series of episodes. So instead of a huge grid with many plots, need to produce a single file with layers for each episode. In SAS we can produce an animated GIF or animated SVG (scalable vector graphics) file. The SVG is a much smaller file format, but you need a browser or a special viewer to "play" it. Still, that's the path I followed:

Here's the result (hosted on my GitHub repo -- but as a GIF for compatibility.)

I code and I know things

Like the Game of Thrones characters, my visualization is imperfect in many ways. As I was just reviewing it I discovered a few data prep missteps that I should correct. I used some features of PROC SGPLOT that I've learned only a little about, and so others might suggest improvements. And my next mission should be to bring this data in SAS Visual Analytics, where the real "data viz maesters" who work with me can work their magic. I'm just hoping that I can stay ahead of the spoilers.

The post Deeper enjoyment of your favorite shows -- through data appeared first on The SAS Dummy.