Many statistical tests use a CUSUM statistic as part of the test. It can be confusing when a researcher refers to "the CUSUM test" without providing details about exactly which CUSUM test is being used. This article describes a CUSUM test for the randomness of a binary sequence. You start with a long sequence of binary values such as heads and tails from a coin toss. The test tries to determine whether the sample comes from a Bernoulli distribution with probability p=0.5. In short, is the binary sequence random?

The CUSUM test for randomness of a binary sequence is one of the NIST tests for verifying that a random or pseudorandom generator is generating bits that are indistinguishable from truly random bits (Rukin, et al., 2000, revised 2010, pp 2-31 through 2-33). The test is straightforward to implement. You first translate the data to {-1, +1} values. You then compute the cumulative sums of the sequence. If the sequence is random, the cumulative sum is equivalent to the position of a random walker who takes unit steps. If the sequence is random, the sums will not move away from 0 (the expected sum) too quickly. I've previously visualized the random walk with unit steps (sometimes called a "Drunkard's walk").

Before proceeding to the CUSUM test, I should mention that this test is often used in conjunction with other tests, such as the "runs test" for randomness. That is because a perfectly alternating sequence such as 0101010101... will pass the CUSUM test even though the sequence is clearly not randomly generated. In fact, any sequence that repeatedly has k zeros followed by k ones also passes the test, provided that k is small enough.

The CUSUM test for randomness of a binary sequence in SAS

The NIST report contains an example of calling the CUSUM test with a sequence of length N=100. The following SAS/IML statements define a sequence of {0, 1} values, convert those values to {-1, +1}, and plot the cumulative sums: 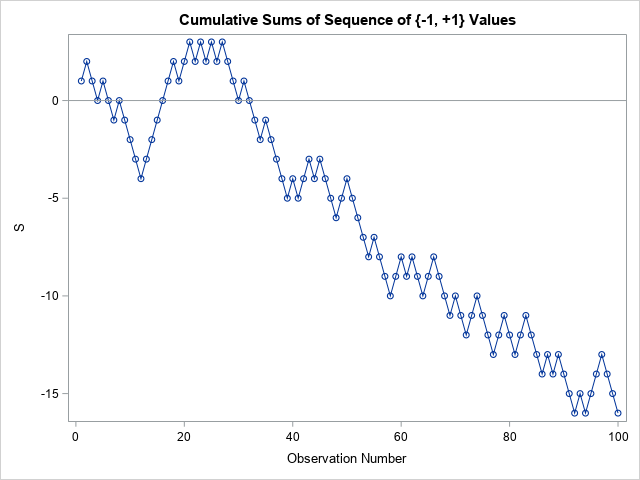 The sequence contains 58 values of one category and 42 values of the other. For a binomial distribution with p=0.5, the probability of a sample that has proportions at least this extreme is about 13%, as shown by the computation 2*cdf("Binomial", 42, 0.5, 100);. Consequently, the proportions are not unduly alarming. However, to test whether the sequence is random, you need to consider not only the proportion of values, but also the sequence. The graph of the cumulative sums of the {-1, +1} sequence shows a drift away from the line S=0, but it is not clear from the graph whether the deviation is more extreme than would be expected for a random sequence of this length.

The CUSUM test gives you a way to quantify whether the sequence is likely to have occurred as a random draw from a Bernoulli(p=0.5) distribution. The test statistic is the maximum deviation from 0. As you can see from the graph, the test statistic for this sequence is 16. The NIST paper provides a formula for the probability that a statistic at least this extreme occurs in a random sequence of length N=100. I implemented a (vectorized) version of the formula in SAS/IML. 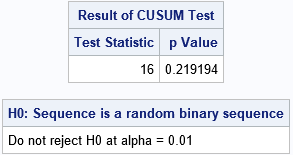 According to the CUSUM test, there is not sufficient evidence to doubt that the sequence was generated from a random Bernoulli process.

A few comments about the program:

A neat thing about the CUSUM test is that you can compute the maximum test statistic based only on the sequence length. Thus if you plan to toss a coin 100 times to determine if it is fair, you can stop tossing (with 99% confidence) if the number of heads ever exceeds the number of tails by 29. Similarly, you can stop tossing if you know that the number of excess heads cannot possibly be 29 or greater. (For example, you've tossed 80 times and the current cumulative sum is 5.) You can apply the same argument to excess tails.

In summary, this article shows how to implement the CUSUM test for randomness of a binary sequence in SAS. Only a few lines of SAS/IML are required, and you can implement the test without using any loops. Be aware that the CUSUM test is not very powerful because regular sequences can pass the test. For example, the sequence 000111000111000111... has a maximum deviation of 3.

The post The CUSUM test for randomness of a binary sequence appeared first on The DO Loop.