As with all probability distributions, there are four essential functions that you need to know: The PDF, CDF, QUANTILE, and RAND functions. 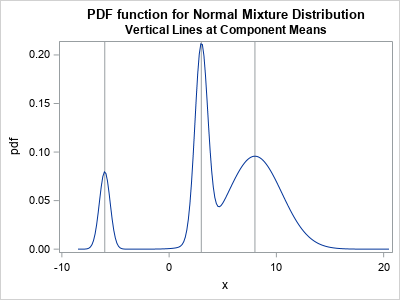 What is a normal mixture distribution?

The adjacent graph shows the density function for a three-component mixture of normal distributions. The means of the components are -6, 3, and 8, respectively, and are indicated by vertical reference lines. The mixing weights are 0.1, 0.3, and 0.6. The SAS program to create the graph is in the next section.

The "NormalMix" distribution in SAS

If you are using a model that has many components, it is tedious to explicitly list every parameter in every function call. Fortunately, there is a simple trick that prevents you from having to list the parameters. You can put the parameters into arrays and use the OF operator (sometimes called the OF keyword) to reference the parameter values in the array. This is shown in the next section.

The PDF and CDF of a normal mixture

The following example demonstrates how to compute the PDF and CDF for a three-component mixture-of-normals distribution. The DATA step shows two tricks:

As shown in the program, the OF operator greatly simplifies and clarifies the function calls. The alternative syntax, which is shown in the comments, is unwieldy.

The following statements create graphs of the PDF and CDF functions. The PDF function is shown at the top of this article. The CDF function, along with a few reference lines, is shown below. 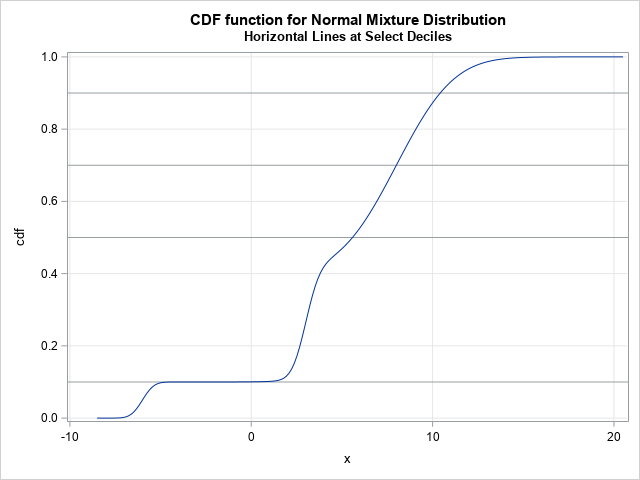 The quantiles of a normal mixture

The quantile function for a continuous distribution is the inverse of the CDF distribution. The graph of the CDF function for a mixture of normals can have flat regions when the component means are far apart relative to their standard deviations. Technically, these regions are not completely flat because the normal distribution has infinite support, but computationally they can be very flat. Because finding a quantile is equivalent to finding the root of a shifted CDF, you might encounter computational problems if you try to compute the quantile that corresponds to an extremely flat region, such as the 0.1 quantile in the previous graph.

The following DATA step computes the 0.1, 0.5, 0.7, and 0.9 quantiles for the normal mixture distribution. Notice that you can use arrays and the OF operator for the QUANTILE function:

Random values from a normal mixture

The RAND function does not explicitly support the "NormalMix" distribution. However, as I have shown in a previous article, you can simulate from an arbitrary mixture of distributions by using the "Table" distribution in conjunction with the component distributions. For the three-component mixture distribution, the following DATA step simulates a random sample: 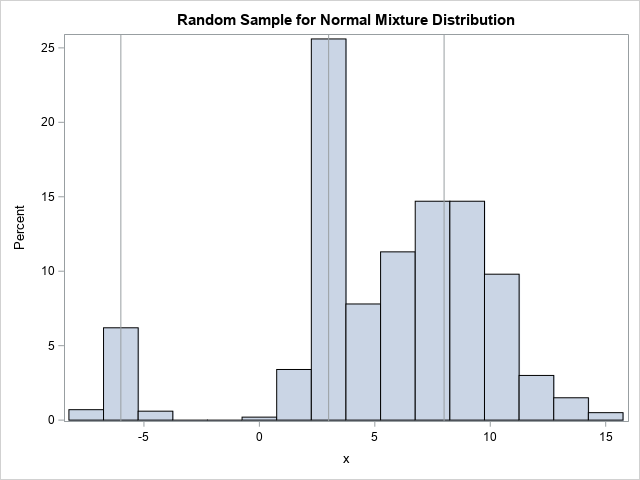 The histogram of a random sample looks similar to the graph of the PDF function, as it should.

In summary, SAS provides built-in support for working with the density (PDF), cumulative probability (CDF), and quantiles (QUANTILE) of a normal mixture distribution. You can use arrays and the OF operator to call these Base SAS functions without having to list every parameter. Although the RAND function does not natively support the "NormalMix" distribution, you can use the "Table" distribution to select a component according to the mixing weights and use the RAND("Normal") function to simulate from the selected normal component.

The post The normal mixture distribution in SAS appeared first on The DO Loop.