What is the Kolmogorov D statistic? 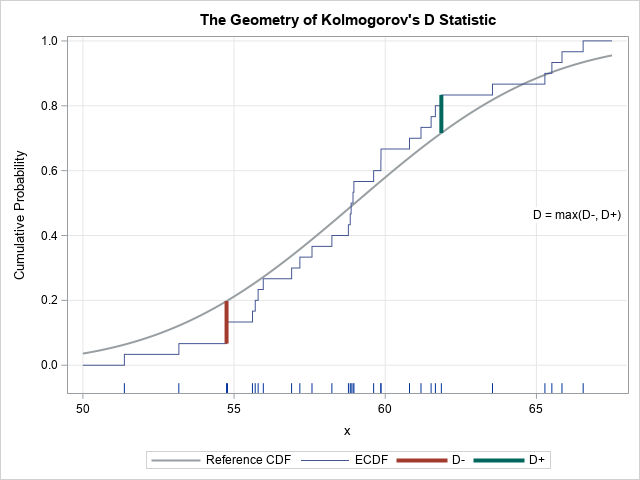 The D statistic is simply the maximum of D– and D+.

How to compute Kolmogorov's D statistic in SAS?

The computation shows that D = 0.131 for this simulated data. The plot at the top of this article shows that the maximum occurs for a datum that has the value 54.75. For that observation, the ECDF is farther away from the normal CDF than at any other location.

Although the computation is not discussed in this article, you can use PROC NPAR1WAY to compute the statistic when you have two samples and want to determine if they are from the same distribution. In this two-sample test, the geometry is the same, but the computation is slightly different because the reference distribution is itself an ECDF, which is a step function.

Although PROC UNIVARIATE in SAS computes the D statistic (and other goodness-of-fit statistics) automatically, it is not difficult to compute the statistic from first principles in a vector language such as SAS/IML.

The D statistic matches the computation from PROC UNIVARIATE.

The SAS/IML implementation is very compact because it is vectorized. By computing the statistic "by hand," you can perform additional computations. For example, you can find the observation for which the ECDF and the reference distribution are farthest away. The following statements find the index of the maximum for the Dminus and Dplus vectors. You can use that information to find the value of the observation at which the maximum occurs, as well as the heights of the ECDF and reference distribution. You can use these values to create the plot at the top of this article, which shows the geometry of the Kolmogorov D statistic:

The observations that maximize the D– and D+ statistics are x=54.75 and x=61.86, respectively. The value of D– is the larger value, so that is the value of Kolmogorov's D.

For completeness, the following statement show how to create the graph at the top of this article. The HIGHLOW statement in PROC SGPLOT is used to plot the vertical line segments that represent the D– and D+ statistics.

Why would anyone want to compute the D statistic by hand if PROC UNIVARIATE can compute it automatically? There are several reasons:

The post What is Kolmogorov's D statistic? appeared first on The DO Loop.