Recently I wrote about how to compute the Kolmogorov D statistic, which is used to determine whether a sample has a particular distribution. One of the beautiful facts about modern computational statistics is that if you can compute a statistic, you can use simulation to estimate the sampling distribution of that statistic. That means that instead of looking up critical values of the D statistic in a table, you can estimate the critical value by using empirical quantiles from the simulation.

This is a wonderfully liberating result! No longer are we statisticians constrained by the entries in a table in the appendix of a textbook. In fact, you could claim that modern computation has essentially killed the standard statistical table.

Before we compute anything, let's recall a little statistical theory. If you get a headache thinking about null hypotheses and sampling distributions, you might want to skip the next two paragraphs!

You can use simulation to estimate the critical value for the Kolmogorov-Smirnov statistical test for normality. For the data in my previous article, the null hypothesis is that the sample data follow a N(59, 5) distribution. The alternative hypothesis is that they do not. The previous article computed a test statistic of D = 0.131 for the data (N = 30). If the null hypothesis is true, is that an unusual value to observe? Let's simulate 40,000 samples of size N = 30 from N(59,5) and compute the D statistic for each. Rather than use PROC UNIVARIATE, which computes dozens of statistics for each sample, you can use the SAS/IML computation from the previous article, which is very fast. The following simulation runs in a fraction of a second. 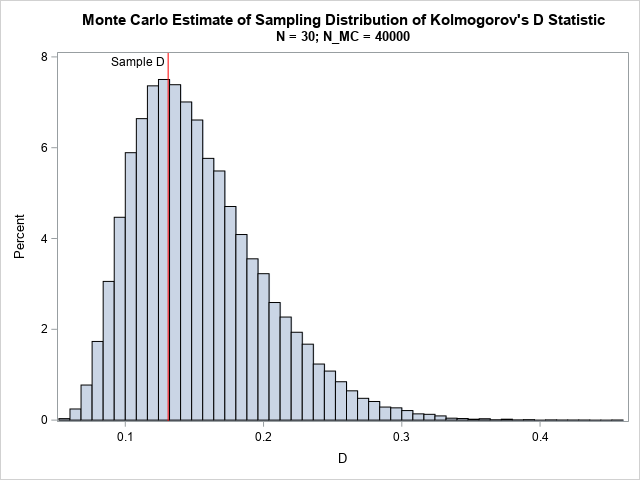 The test statistic is right smack dab in the middle of the null distribution, so there is no reason to doubt that the sample is distributed as N(59, 5).

How big would the test statistic need to be to be considered extreme? To test the hypothesis at the α significance level, you can compute the 1 – α quantile of the null distribution. The following statements compute the critical value for α = 0.05 and N = 30:

The estimated critical value for a sample of size 30 is 0.242. This compares favorably with the exact critical value from a statistical table, which gives Dcrit = 0.2417 for N = 30.

You can also use the null distribution to compute a p value for an observed statistic. The p value is estimated as the proportion of statistics in the simulation that exceed the observed value. For example, if you observe data that has a D statistic of 0.28, the estimated p value is obtained by the following statements:

This same technique works for any sample size, N, although most tables critical values only for all N ≤ 30. For N > 35, you can use the following asymptotic formulas, developed by Smirnov (1948), which depend only on α: 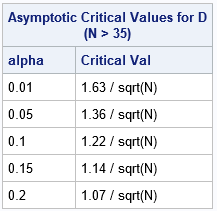 The Kolmogorov D statistic does not depend on the reference distribution

In summary, you can use simulation to estimate the critical values for the Kolmogorov D statistic. In a vectorized language such as SAS/IML, the entire simulation requires only about a dozen statements and runs extremely fast.

The post Critical values of the Kolmogorov-Smirnov test appeared first on The DO Loop.