Statistical programmers and analysts often use two kinds of rectangular data sets, popularly known as wide data and long data. Some analytical procedures require that the data be in wide form; others require long form. (The "long format" is sometimes called "narrow" or "tall" data.) Fortunately, the statistical graphics procedures in SAS (notably, PROC SGPLOT) can usually accommodate either format. You can use multiple statements to create graphs of wide data. You can use a single statement and the GROUP= option to create graphs of long data. 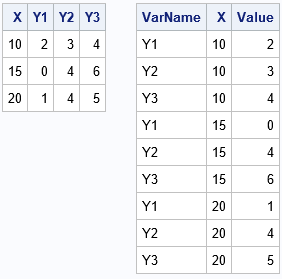 Suppose you have four variables (with N observations) and you want to overlay line plots of three of the variables graphed against the fourth. There are two natural ways to arrange the 4*N data values. The first (and most natural) is a data set that has N rows and 4 variables (call them X, Y1, Y2, and Y3). This is the "wide form" of the data. The "long form" data set has three variables and 3*N rows, as shown to the right. The first column (VarName) specifies the name of the three response variables. The second column (X) indicates the value of the independent variable and the third column (Y) represents the value of the dependent variable that is specified in the VarName column. Some people will additionally sort the long data by the VarName variable, but that is not usually necessary. In general, if you want to stack k variables, the long form data will contain k*N observations.

PROC SGPLOT enables you to plot either set of data. For the wide data, you can use three SERIES statements to plot X vs Y1, X vs Y2, and X vs Y3, as follows. Notice that you can independently set the attributes of each line, such as color, symbol, line style. In the following program, the line thickness is set to the same value for all lines, but you could make that attribute vary, if you prefer. 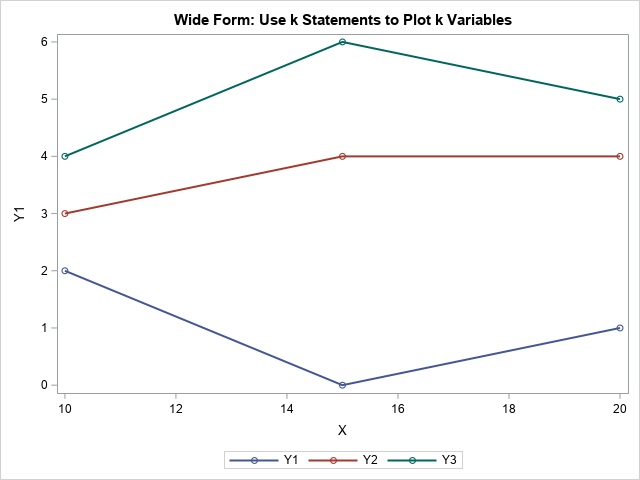 You can use PROC TRANSPOSE or the SAS DATA step to convert the data from wide form to long form. When the data are in the long format, you use a single SERIES statement and the GROUP=VarName option to plot the three groups of lines. In addition, you can set the attributes for all the lines by using a single statement. 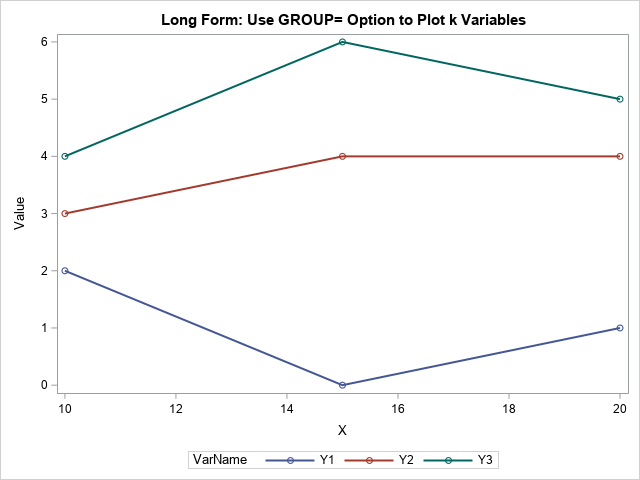 Advantages and disadvantages of wide and long formats

The two formats contain the same information, but sometimes one form is more convenient than the other. Here are a few reasons to consider wide-form and long-form data:

Use the wide form when...

Use the long form when... 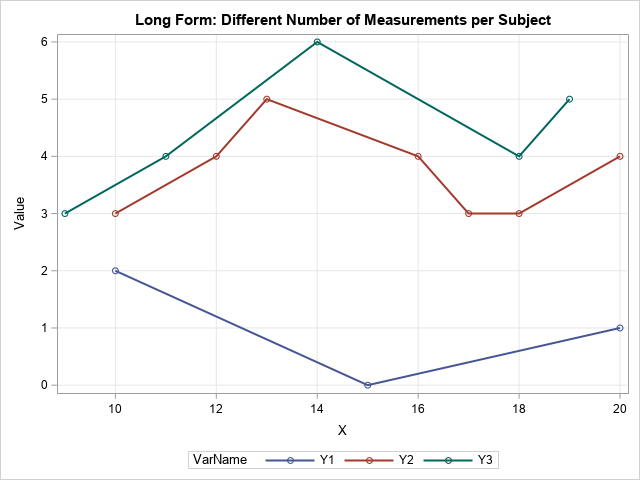 In summary, you can use PROC SGPLOT to create graphs regardless of whether the data are in wide form or long form. I've presented a few common situations in which you might want to use each kind of data representation. Can you think of other situations in which the long format is preferable to the wide format? Or vice versa? Let me know by leaving a comment.

The post Graph wide data and long data in SAS appeared first on The DO Loop.