A previous article describes the DFBETAS statistics for detecting influential observations, where "influential" means that if you delete the observation and refit the model, the estimates for the regression coefficients change substantially. Of course, there are other statistics that you could use to measure influence. Two popular ones are the DFFTIS and Cook's distance, which is also known as Cook's D statistic. Both statistics measure the change in predicted values that occurs when you delete an observation and refit the model. This article describes the DFFITS and Cook's D statistics and shows how to compute and graph them in SAS.

DFFITS: How the predicted value changes if an observation is excluded

PROC REG provides three ways to generate the DFFITS statistics for each observation:

The following DATA step extracts a subset of n = 84 vehicles from the Sashelp.Cars data, creates a short ID variable for labeling observations, and sorts the data by the response variable, MPG_City. The data are sorted because the DFFITS statistic is graphed against the observation number, which is an arbitrary quantity. By sorting the data, you know that small observation numbers correspond to low values of the response and so forth. If you have a short ID variable, you can label the influential observations by using the LABEL suboption, as follows: 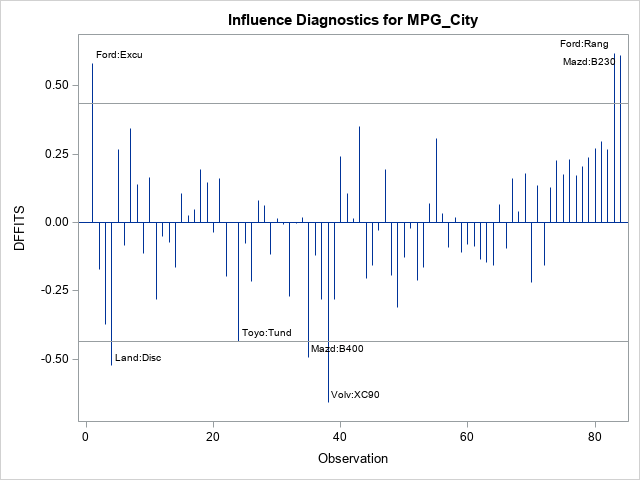 Cook's D: A distance measure for the change in regression estimates

When you estimate a vector of regression coefficients, there is uncertainty. The confidence regions for the parameter estimate is an ellipsoid in k-dimensional space, where k is the number of effects that you are estimating (including the intercept). Cook (1977) defines a distance that the estimates move within the confidence ellipse when the i_th point is deleted. Equivalently, Cook shows that the statistic is proportional to the squared studentized residual for the i_th observation. The documentation for PROC REG provides a formula in terms of the studentized residuals.

By default, PROC REG creates a plot of Cook's D statistic as part of the panel of diagnostic plots. (Cook's D is the second row and third column.) You can create a larger stand-alone plot by using the PLOTS=DFFITS option. Optionally, you can label the influential points (those whose Cook's D statistic exceeds 4/sqrt(n)) by using the LABEL suboption, as shown below: 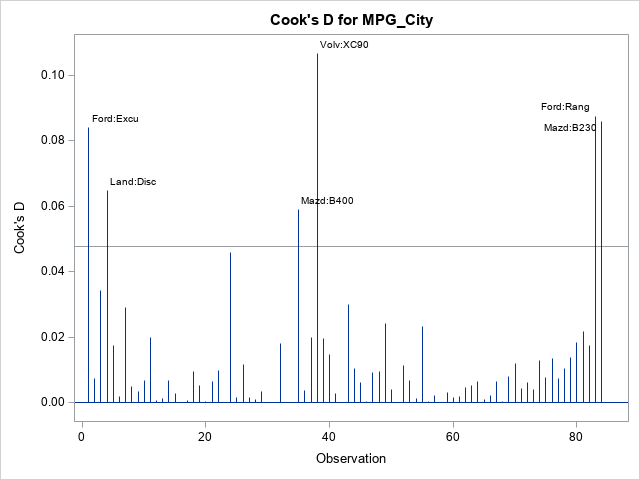 In many ways, the plot of Cook's D looks similar to a plot of the squared DFFITS statistics. Both measure a change in the predicted value at the i_th observation when the i_th observation is excluded from the analysis. The formula for Cook's D statistic squares a residual-like quantity, so it does not show the direction of the change, whereas the DFFITS statistics do show the direction. Otherwise, the observations that are "very influential" are often the same for both statistics, as seen in this example.

The post Influential observations in a linear regression model: The DFFITS and Cook's D statistics appeared first on The DO Loop.