Move over video games and sports. Make room for escape rooms. This burgeoning form of entertainment found its roots in the video gaming movement. Escape rooms tap into a player's drive to reach the next level, solve a puzzle and win. Escape rooms present a physical game that traps you until your brain (and teamwork) help you escape. Does that sound exhilarating or terrifying? Maybe a bit of both.

SAS adapted this concept and built its own Data Science Escape Rooms at SAS Global Forum 2019. More than 800 customers used SAS software to solve a series of problems in one of six rooms, spanning three different themes: soccer, wildlife and cyberattack.

I had the opportunity to support these rooms by assisting with registration and check-in. I also "covered" the experience through videos that shared a behind-the-scenes look, player reactions and backstories on how the rooms were developed.

I even got to chat with one team that completed all three rooms. The Advanced Claims Analysis Team with the United States Office of Personnel Management, aka Team "Auditgators," included Kevin Sikora, Julie Zoeller, Richard Allen and Lauren Goob. They spoke about how cool it was to play with software they're not used to in pseudo real-world scenarios.

Let me give you a lay of the land. The rooms included four stations each with a computer screen and a mouse (no keyboards). At each station, players used products like SAS Visual Analytics and SAS Visual Investigator to solve a challenge, working against the clock to escape the room within 20 minutes. Talk about pressure. 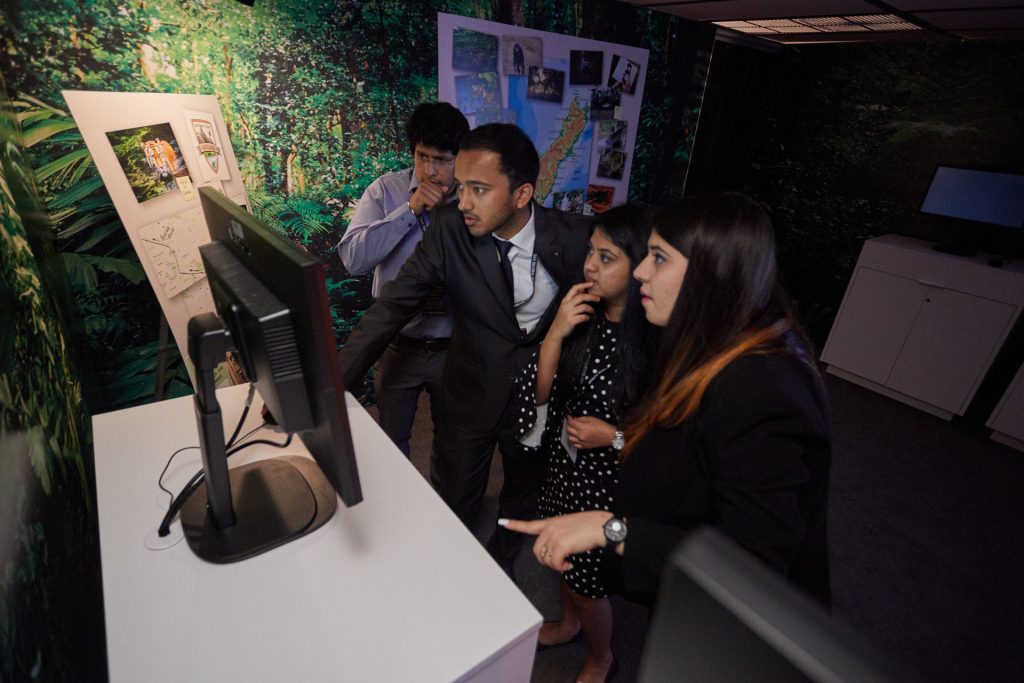 A team studies a problem at one of four stations in the Wildlife-themed escape room.

"You definitely felt a sense of urgency in there," recalls Sikora. "We really got into the wildlife room – it's where we received the highest score. We had the chance to do some great team-building too. We're more cohesive having shared this experience."

The Auditgators worked separately to solve problems and then collaborated to piece together the bigger puzzle. When they got stuck, they asked for help from the "gamemasters," who were literally behind the walls of the rooms. Gamemasters doled out clues to nudge teams along.

This may seem like a fun diversion, but how in the world can you apply this experience to your daily work? "Well we certainly realized the value in using more graphs, to click and filter to find answers we need," said Zoeller. "It was enlightening to see how we could show the data, and it gave us a better awareness of the end goal, the big picture."

Allen and Goob have been to SAS Global Forums in the past and said that the Data Science Escape Rooms gave them the best opportunity to interact with one another than anything else at the event. "It breaks up sitting in rooms and listening, breaks up the monotony. It gave us a chance to do something together as a team."

Want a taste of the action at the event? Here, SAS' Lisa Dodson, Data Science Escape Room Gamemaster, couldn't hide her excitement to give clues and cheer on teams.

Michael Gibbs with the University of Arkansas described the intensity and pressure to get the answer and move on while escaping.

SAS partnered with SciSports to build the soccer-themed escape room. SciSports Founder and CIO Giels Brouwer and Data Scientist Mick Bosma explained how the idea came about and plans to take the room on the road.

While most participants enjoyed the challenge, not everyone "escaped" successfully. The most successful teams had solid teamwork and good communication. Sound like a lesson for "real life"? SAS' Alfredo Iglesias Rey reports that 18 percent of the teams completed all four challenges correctly. He also marveled at how players were able to create advanced machine learning techniques with just a mouse and keyboard.

Dying to check out a Data Science Escape Room yourself? You'll find them at several local SAS Forums this year, and plans are underway to offer them at other venues. But you don't have to wait for an escape room to get a feel for SAS software. Try SAS online right now, for free.

A playful way to get your hands on SAS: the Data Science Escape Rooms was published on SAS Users.