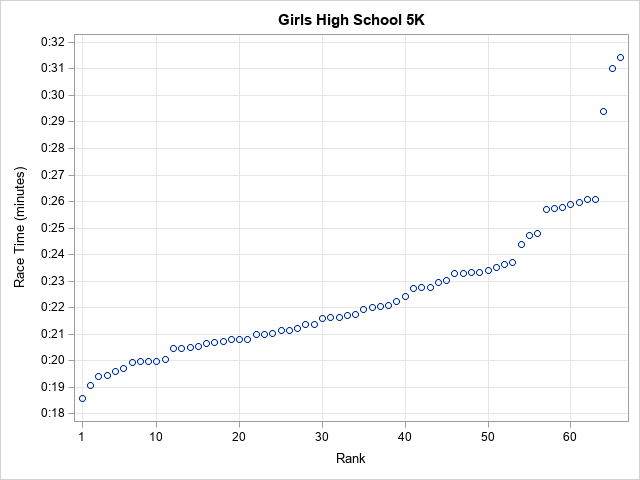 Math and statistics are everywhere, and I always rejoice when I spot a rather sophisticated statistical idea "in the wild." For example, I am always pleased when I see a graph that shows the distribution of race times in a typical race (such as a 5K), as shown to the right. The finishing times are plotted against the order in which runners crossed the finish line. This is a great visualization because you can see the times for each participant, the range of times between the top finishers and the laggards, and how close each runner's time was to the time of the person who placed ahead of her.

What amazes me is that this graph essentially shows the cumulative distribution of race times. The cumulative distribution is not generally used outside of scientific publications. Yet here it is, easily understood and with no accompanying explanation! Graphs like this are often used to visualize race times for triathlons, marathons, 5Ks, and more.

The distribution of race times

The graph is noteworthy for what it is and also for what it isn't. It isn't a histogram. If you give a statistician a set of measurements and ask for the distribution, you are likely to get a histogram. For small data sets, you might also get a fringe plot below the histogram, as shown below: 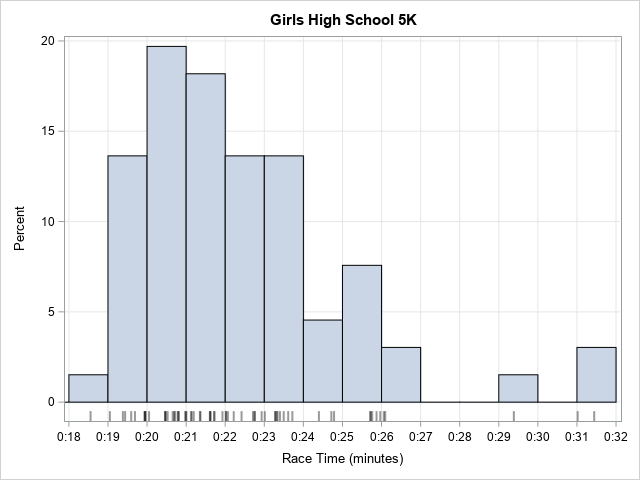 The graph shows the distribution of race time for the same race. The histogram bins the times into one-minute intervals. You can easily see that a small percentage of runners (about 2%) finished the race under 19 minutes and that about 40% of the runners finished between 20 and 22 minutes. You can see that only a few runners exceeded 26 minutes.

Since the histogram is such a standard plot, you would think it would be the "best" graph to use, but the time-versus-rank graph has several advantages:

The cumulative distribution of race times 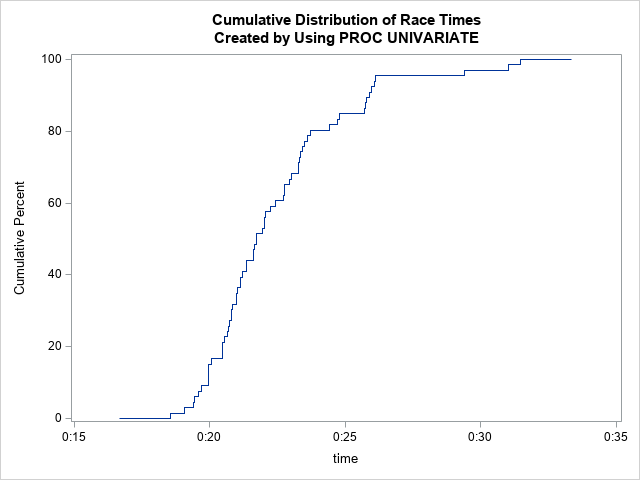 The CDF plot has the same shape as the time-versus-rank graph, but you need to flip the axes. (Geometrically, flip the CDF plot across its diagonal.) The CDF plot differs in three minor ways:

So, yes, there are minor differences. But I still smile whenever I see the time-versus-rank graph. Although the racers might not know or care, the plot contains the same information as a plot of the cumulative distribution of the race times.

You can download the SAS program that contains the data and creates all the graphs in this article.

The post Visualize race times in SAS appeared first on The DO Loop.