When my colleague, Robert Allison, blogged about visualizing the Mandelbrot set, I was reminded of a story from the 1980s, which was the height of the fractal craze. A research group in computational mathematics had been awarded a multimillion-dollar grant to purchase a supercomputer. When the supercomputer arrived and got set up, what was the first program they ran? It was a computation of the Mandelbrot set! They wanted to see how fast they could generate pretty pictures with their supercomputer!

Although fractals are no longer in vogue, the desire for fast computations never goes out of style. In a matrix-vector language such as SAS/IML, you can achieve fast computations by vectorizing the computations, which means operating on large quantities of data and using matrix-vector computations. Sometimes this paradigm requires rethinking an algorithm. This article shows how to vectorize the Mandelbrot set computation. The example provides important lessons for statistical computations, and, yes, you get to see a pretty picture at the end!

The classical algorithm for the Mandelbrot set

As a reminder, the Mandelbrot set is a visualization of a portion of the complex plane. If c is a complex number, you determine the color for c by iterating a complex quadratic map z <- z2 + c, starting with z=0. You keep track of how many iterations it takes before the iteration diverges to infinity, which in practice means that |z| exceeds some radius, such as 5. The parameter values for which the iteration remains bounded belong to the Mandelbrot set. Other points are colored according to the number of iterations before the trajectory exceeded the specified radius.

The classical computation of the Mandelbrot set iterates over the parameter values in a grid, as follows:

An advantage of this algorithm is that it does not require much memory, so it was great for the PCs of the 1980s! For each parameter, the color is determined (and often plotted), and then the parameter is never needed again.

A vectorized algorithm for the Mandelbrot set

The vectorized algorithm performs the same computations as the scalar algorithm, but each iteration of the quadratic map operates on a huge number of current states (z). Also, each all states are checked for divergence by using a single call to a vector operation. There are many fewer function calls, which reduces overhead costs, but the vectorized program uses a lot of memory to store all the parameters and states.

Let's see how the algorithm might be implemented in the SAS/IML language. First, define vectorized functions for performing the complex quadratic map and the computation of the complex magnitude (absolute value). Because SAS/IML does not provide built-in support for complex numbers, each complex number is represented by a 2-D vector, where the first column is the real part and the second column is the imaginary part.

The next block of statements defines a grid of parameters for the parameter, c:

There are two efficiencies you can implement. First, you can pre-process some of the parameters that are known to be inside the "head" or "body" of the bug-shaped Mandelbrot set. Second, for each iteration, you only need to apply the quadratic map to the points that have not yet diverged (that is, iters is missing for that parameter). This is implemented in the following program statements:

The last step is to assign colors that visualize the Mandelbrot set. Whereas Robert Allison used a scatter plot, I will use a heat map. The iters vector contains the number of iterations before divergence, or MaxIters if the trajectory never diverged. You can assign a color ramp to the number of iterations, or, as I've done below, to a log-transformation of the iteration number. I've previously discussed several ways to assign colors to a heat map. 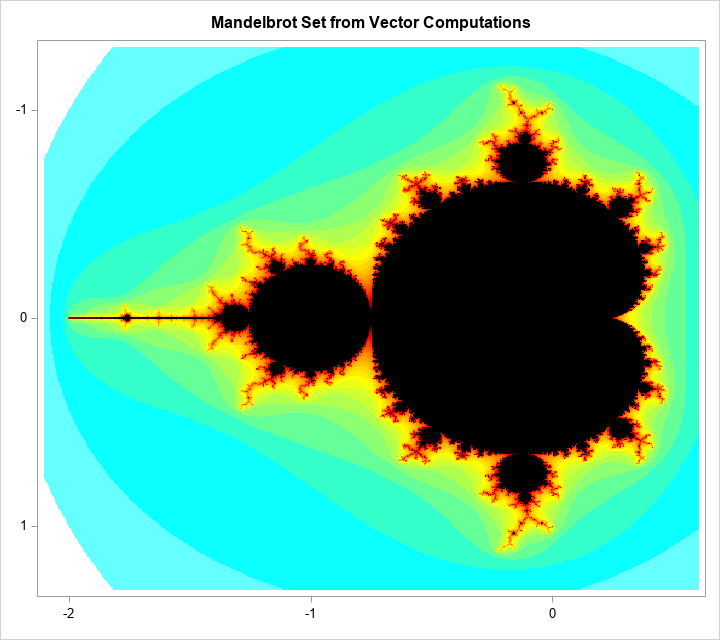 On my PC, the Mandelbrot computation takes about a second. This is not blazingly fast, but it is faster than the low-memory, non-vectorized, computation. If you care about the fastest speeds, use the DATA step, as shown in Robert's blog post.

Statistical programmers don't usually have a need to compute fractals, but the ideas in this program apply to time series computations, root-finding, optimization, and any computation where you compute the same quantity for many parameter values. In short, although the Mandelbrot set is fun to compute, the ability to vectorize computations in a matrix language is a skill that rewards you with more than pretty pictures. And fast computations never go out of style.

The post Vectorize the computation of the Mandelbrot set in a matrix language appeared first on The DO Loop.