One of my friends likes to remind me that "there is no such thing as a free lunch," which he abbreviates by "TINSTAAFL" (or TANSTAAFL). The TINSTAAFL principle applies to computer programming because you often end up paying a cost (in performance) when you call a convenience function that simplifies your program.

I was thinking about TINSTAAFL recently when I was calling a Base SAS function from the SAS/IML matrix language. The SAS/IML language supports hundreds of built-in functions that operate on vectors and matrices. However, you can also call hundreds of functions in Base SAS and pass in vectors for the parameters. It is awesome and convenient to be able to call the virtual smorgasbord of functions in Base SAS, such as probability function, string matching functions, trig function, financial functions, and more. Of course, there is no such thing as a free lunch, so I wondered about the overhead costs associated with calling a Base SAS function from SAS/IML. Base SAS functions typically are designed to operate on scalar values, so the IML language has to call the underlying function many times, once for each value of the parameter vector. It is more expensive to call a function a million times (each time passing in a scalar parameter) than it is to call a function one time and pass in a vector that contains a million parameters.

To determine the overhead costs, I decided to test the cost of calling the MISSING function in Base SAS. The IML language has a built-in syntax (b = (X=.)) for creating a binary variable that indicates which elements of a vector are missing. The call to the MISSING function (b = missing(X)) is equivalent, but requires calling a Base SAS many times, once for each element of x. The native SAS/IML syntax will be faster than calling a Base SAS function (TINSTAAFL!), but how much faster?

The following program incorporates many of my tips for measuring the performance of a SAS computation. The test is run on large vectors of various sizes. Each computation (which is very fast, even on large vectors) is repeated 50 times. The results are presented in a graph. The following program measures the performance for a character vector that contains all missing values. 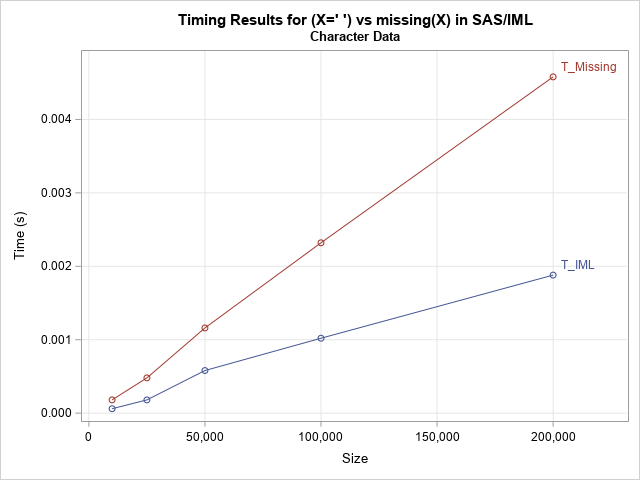 You can run a similar test for numeric values. For numeric values, the SAS/IML syntax is about 10-20 times faster than the call to the MISSING function, but, again, the absolute times are less than five milliseconds.

The post Timing performance in SAS/IML: Built-in functions versus Base SAS functions appeared first on The DO Loop.