Most SAS programmers know how to use PROC APPEND or the SET statement in DATA step to unconditionally append new observations to an existing data set. However, sometimes you need to scan the data to determine whether or not to append observations. In this situation, many SAS programmers choose one of the following methods:

This article shows the second method. It shows how to use the SAS DATA step to scan through observations and remember certain values. If a condition is met, it uses the values to append new observations to the end of the data by using end-of-file processing.

Often SAS programmers need to implement complicated data-dependent logic. A simple example is "If the XYZ variable contains a certain value but doesn't contain a different value, then do something." On the SAS discussion forums, the experts often suggest scanning through the data with a DATA step and keeping one or more "flag variables" that indicate which conditions have been satisfied. At the end of the DATA step, you can look at the values of the flag variables to determine what action to take.

Last week I encountered a situation where I needed to conditionally append observations to input data. Although the solution is easy if you use the SAS/IML language (which enables you to scan an entire vector of values), I needed to solve the problem by using the DATA step, which processes only one observation at a time. The problem had the following form: 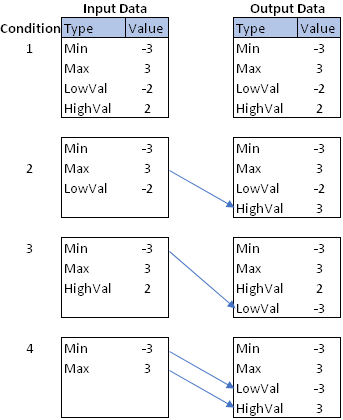 The goal is to create an output data set that always contains the four values 'Min', 'Max', 'LowVal', and 'HighVal'. The goal is summarized by the figure to the right. The following list describes how to generate the 'LowVal' and 'HighVal' observations if they do not exist.

The figure shows the four situations that can occur. The input data set always contains the 'Min' and 'Max' values but can contain none, one, or two of the other values. To goal is to produce the data set on the right, which always contains all four values. The next section presents a solution, so stop reading here if you want to solve the problem on your own!

The END= option and end-of-file processing

To solve the problems, I used two facts about the SAS DATA step:

Use caution with the DELETE and subsetting IF statements

When performing end-of-file processing, be careful if you use a DELETE statement or a subsetting IF statement. For details and examples, see "The Perils of End-of-File Processing when Subsetting Data" (Landry, 2009). Landry summarizes the problem as follows (p. 2): "The problem occurs only when the last record in the dataset is deleted.... The reason this happens is that when a record is deleted..., SAS stops processing and returns to the next iteration of the DATA step. Thus, any executable statements placed after the [DELETE or subsetting IF statements] do not get executed."

In summary, this article shows how to use the SAS DATA step to conditionally add observations to the end of the input data. This is useful for data-dependent logic when the observations that you need to append depend on the values of the data. You can perform end-of-file processing by using the END= option on the SET statement to create an indicator variable that has the value 1 for the last observation in the input data. You can use the OUTPUT statement to append additional observations, but remember that you also need to use the OUTPUT statement after the SET statement if you want to output the original data.

Do you have a favorite way to conditionally append data? Do you know of other potential pitfalls with end-of-file processing? Leave a comment.

The post Conditionally append observations to a SAS data set appeared first on The DO Loop.