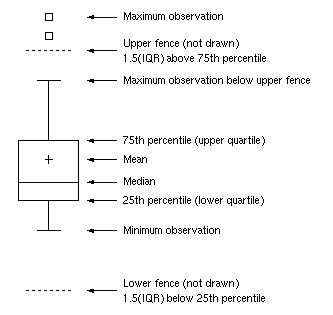 A SAS programmer asked an intriguing question on the SAS Support Communities: Can you use SAS to create a graph that shows how the elements in a box-and-whiskers plot relate to the data? The SAS documentation has several examples that explain how to read a box plot. One of the documentation images is shown to the right. The programmer wanted a program that creates the image.

The answer is yes. While developing the program, I learned about axis tables and annotation in the SGPLOT procedure. This article shows how to use the YAXISTABLE statement to overlay a table of text on a box plot (or other plots). The article also shows how to use the SG annotation facility to overlay curves, arrows, and other features. You can use these ideas to augment and decorate your own SAS graphs. My primary goal is not to reproduce the graph in the documentation, but rather to demonstrate general techniques that are relevant in many situations.

The creation of the graph is divided into five steps: 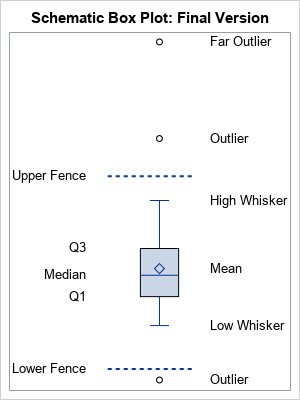 For graphs like this, it is always best to decide what SGPLOT statements you can use and how to arrange the underlying data object for the graph. There are eight statistics that are important for understanding a box plot. To reduce the likelihood of overlapping text, I decided to split them into two groups, one on the right and one on the left. The graph that I will eventually produce is shown to the right. I want to use three SGPLOT statements and an annotation data set:

Assume the data are in a variable named X in a data set named HAVE. Because PROC BOXPLOT (used in the next step) requires a Group variable, you need to add a constant variable named GROUP to the data. The following data simulates normally distributed data and adds three outliers:

The easiest way to compute the whiskers and outliers is to use the OUTBOX= option in PROC BOXPLOT. It writes SAS data set that contains two variables, _TYPE_ and _VALUE_, that contains the values for many of the features and statistics that are displayed by the box plot. 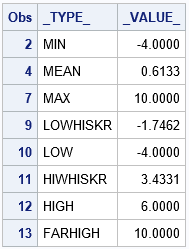 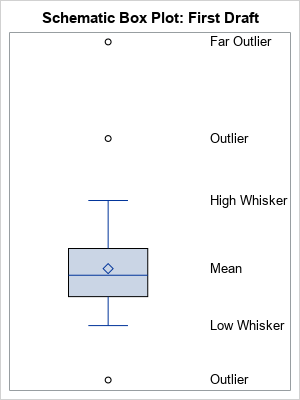 As explained previously, the upper and lower fences are computed by using the first and third quartiles and the interquartile range. The coordinates of the fences are not produced by PROC BOXPLOT. The following statements use PROC MEANS to compute the quartiles, then use a DATA step to compute the IQR and the locations of the fences. A call to PROC TRANSPOSE converts the data set from wide to long form so that it can be merged with the data set from the previous section. Lastly, a second YAXISTABLE statement is added to the PROC SGPLOT call to display the quartiles and fences on the left side of the graph. 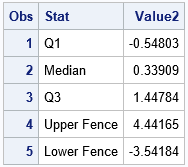 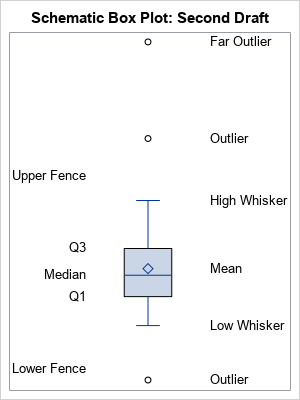 If you want to overlay additional curves, arrows, or text on the graph, use an SG annotation data set. For a gentle introduction to SG annotation, see Dan Heath's 2011 SAS Global Forum paper about SG annotation. For a more complete exposition, including many cut-and-paste examples, see Chapter 3 of Warren Kuhfeld's free e-book Advanced ODS Graphics Examples, which also contains an excellent chapter about axis tables.

To keep this article from becoming too long and complicated, I will use SG annotation merely to add two dashed horizontal lines that indicate the location of the lower and upper fences. When you use annotation, it is important to choose good coordinate systems. For this example, you can use the WallPercent coordinate system ([0, 100]) for the horizontal direction and use the DataValue coordinate system for the vertical direction. I used the interval [35, 65] to draw the horizontal lines. The vertical position of the lines come from the IQR2 data, which was created in the previous section.

The graph is complete! The final graph is shown in the "Plan the Graph" section. The challenge in creating this graph is not the SGPLOT syntax (which is simple) but is computing all the coordinate values and arranging them in a rectangular format.

Does the program handle other data sets?

My goal was to augment a box plot with text that explains the important statistical features of the plot and that is flexible enough to work for an arbitrary data set. Let's see how well the program works on other data that are not so symmetrical. The following data set defines the X variable as the MPG_City values for the vehicles in the Sashelp.Cars data set. These data are positively skewed.

If you run the program on this data, you obtain the following graph. I commented out the YAXIS statement in the SGPLOT call so that the Y axis ticks and values are displayed. 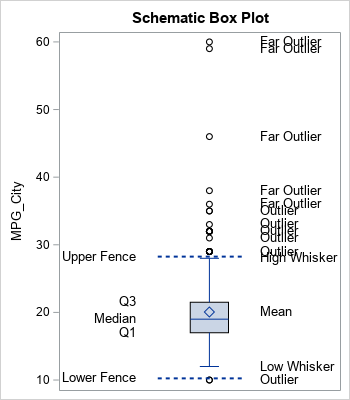 The graph is typical of skewed data. There are many outliers and the text for the outliers can overlap other text. Nevertheless, the program does a fair job of displaying the important statistical features of the box plot for these data.

In summary, this article shows how to use PROC BOXPLOT, PROC MEANS, and the DATA step to compute data-dependent quantities that represent the statistical features of a box plot. You can use the YAXISTABLE statement to display explanatory text at various data values. You can use SG annotation to display lines, arrows, and other decorations. For simplicity, I hard-coded some the data set name and the variable name in this program. It is straightforward to encapsulate the computations into a SAS macro that would create an annotated box plot for any numerical variable.

You can download the full SAS code in this article.

The post Annotate features of a schematic box plot in SGPLOT appeared first on The DO Loop.