One of the strengths of the SAS/IML language is its flexibility. Recently, a SAS programmer asked how to generalize a program in a previous article. The original program solved one optimization problem. The reader said that she wants to solve this type of problem 300 times, each time using a different set of parameters. Essentially, she wants to loop over a set of parameter values, solve the corresponding optimization problem, and save each solution to a data set.

Yes, you can do this in SAS/IML, and the technique is not limited to solving a series of optimization problems. Any time you have a parameterized family of problems, you can implement this idea. First, you figure out how to solve the problem for one set of parameters, then you can loop over many sets of parameters and solve each problem in turn.

Solve the problem one time

As I say in my article, "Ten tips before you run an optimization," you should always develop and debug solving ONE problem before you attempt to solve MANY problems. This section describes the problem and solves it for one set of parameters. 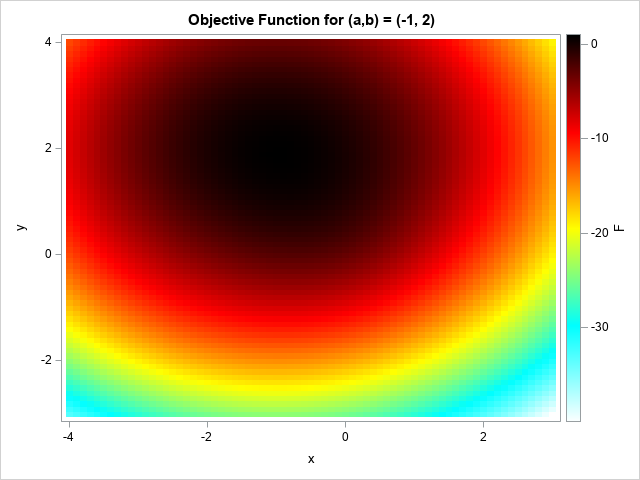 Because the exponential term rapidly approaches zero when (x1, x2) moves away from the origin, this function is a perturbation of a quadratic function. The maximum will occur somewhat close to the value (x1, x2) = (a, b), which is the value for which the quadratic term is maximal. The following graph shows a contour plot for the function when (a, b) = (-1, 2). The maximum value occurs at approximately (x1, x2) = (-0.95, 1.9).

The following program defines the function in the SAS/IML language. In the definition, the parameters (a, b) are put in the GLOBAL statement because they are constant during each optimization. The SAS/IML language provides several nonlinear optimization routines. This program uses Newton-Raphson optimizer to solve the problem for (a, b) = (-1, 2). 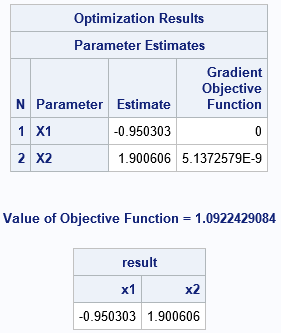 Solve the problem for many parameters

After you have successfully solved the problem for one set of parameters, you can iterate over a sequence of parameters. The following DATA step specifies five sets of parameters, but it could specify 300 or 3,000. These parameters are read into a SAS/IML matrix. When you solve a problem many times in a loop, it is a good idea to suppress any output. The SAS/IML program suppresses the tables and iteration history for each optimization step and saves the solution and the convergence status: 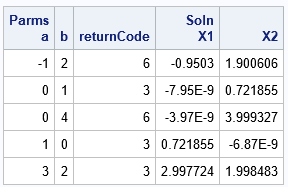 Choosing an initial guess based on the parameters

If the problem is not solved successfully for a certain parameter value, it might be that the initial guess was not very good. It is often possible to approximate the objective function to obtain a good initial guess for the solution. This not only helps ensure convergence, but it often improves the speed of convergence. If you want to solve 300 problems, having a good guess will speed up the total time.

For this example, the objective functions are a perturbation of a quadratic function. It is easy to show that the quadratic function has an optimal solution at (x1, x2) = (a, b), and you can verify from the previous output table that the optimal solutions are close to (a, b). Consequently, if you use (a, b) as an initial guess, rather than a generic value like (0, 0), then each problem will converge in only a few iterations. For this problem, the GetInitialGuess function return (a,b), but in general the function would return a function of the parameter or even solve a simpler set of equations. 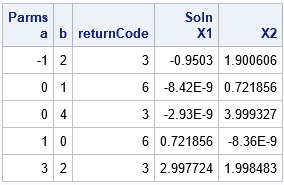 The solutions and return codes are similar to the previous example. You can see that changing the initial guess changes the convergence status and slightly changes the solution values.

For this simple problem, choosing a better initial guess provides only a small boost to performance. If you use (0,0) as an initial guess, you can solve 3,000 problems in about 2 seconds. If you use the GetInitialGuess function, it takes about 1.8 seconds to solve the same set of optimizations. For other problems, providing a good initial guess might be more important.

In conclusion, the SAS/IML language makes it easy to solve multiple optimization problems, where each problem uses a different set of parameter values. To improve convergence, you can sometimes use the parameter values to compute an initial guess.

The post Solve many optimization problems appeared first on The DO Loop.