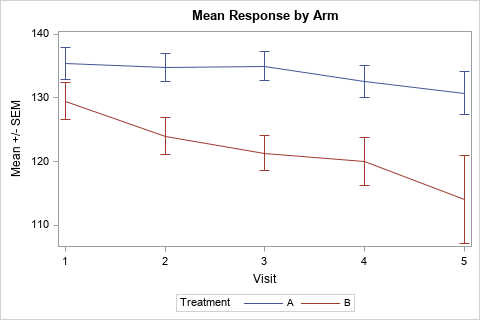 It is always great to read an old paper or blog post and think, "This task is so much easier in SAS 9.4!" I had that thought recently when I stumbled on a 2007 paper by Wei Cheng titled "Graphical Representation of Mean Measurement over Time." A substantial portion of the eight-page paper is SAS code to creating a graph of the mean responses over time for patients in two arms of a clinical trial. (An arm is a group of participants who receive an intervention or who receive no intervention, such as an experimental group and the control group.)

The graph to the right is a modern version of one graph that Cheng created. This graph is created by using PROC SGPLOT. This article shows how to create this and other graphs that visualize the mean response by time for groups in a clinical trial.

This article assumes that the data are measured at discrete time points. If time is a continuous variable, you can model the mean response by using a regression model, and you can use the EFFECTPLOT statement to graph the predicted mean response versus time.

Cheng did not include his sample data, but the following DATA step defines fake data for 11 patients, five in one arm and six in the other. The data produce graphs that are similar to the graphs in Cheng's paper.

Use the VLINE statement for mean and variation

The VLINE statement in PROC SGPLOT can summarize data across groups. When you use the RESPONSE= and STAT= option, it can display the mean, median, count, or percentage of a response variable. You can add "error bars" to the graph by using the LIMITSTAT= option. Following Cheng, the error bars indicate the standard error of the mean (SEM). the following statements create the line plot shown at the top of this article:

That was easy! Notice that the VLINE statement computes the mean and standard error for Y for each value of VisitNum and Armcd variables.

This graph shows the standard error of the mean, but you could also show confidence limits for the mean (LIMITSTAT=CLM) or indicate the extent of one or more standard deviations (LIMITSTAT=STDDEV and use the NUMSTD= option).

Cheng's graph is appropriate when the intended audience for the graph includes people who might not be experts in statistics. For a more sophisticated audience, you could create a series of box plots and connect the means of the box plots. In this plot, the CATEGORY= option is used to specify the time-like variable and the GROUP= option is used to specify the arms of the study. (Learn about the difference between categories and groups in box plots.) 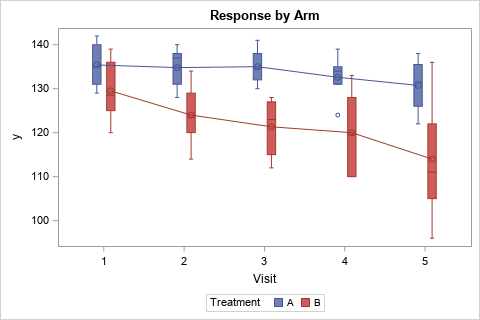 Whereas the first graph emphasizes the mean value of the responses, the box plot emphasizes the individual responses. The mean responses are connected by lines. The boxes show the interquartile range (Q1 and Q3) as well as the median response. Whiskers and outliers indicate the spread of the data.

PROC MEANS supports dozens of descriptive statistics, but, for easy comparison, I will show how to create the same graph by using summarized data. The following call to PROC MEANS creates an output data set that contains statistics for each visit/arm combination. 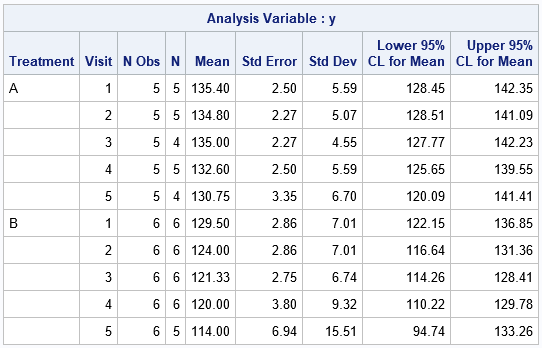 The output data set (MeanOut) contains all the information in the table, plus additional "marginal" information that summarizes the means across all arms (for each visit), across all visits (for each arm), and for the entire study. When you use the MeanOut data set, you should use a WHERE clause to specify which information you want to analyze. For this example, we want only the information for the Armcd/VisitNum combinations. You can run a simple DATA step to subset the output and to create variables for the values Mean +/- SEM, as follows: 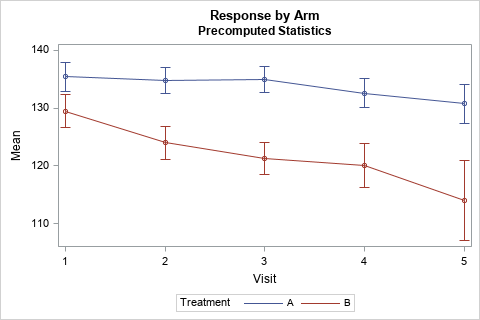 You can use this technique to create graphs of other statistics versus time.

In SAS 9.4, you can use the XAXISTABLE statement to add one or more rows of information to a graph. The output from PROC MEANS includes a variable named N, which gives the number of nonmissing measurements at each time. The following statements add information about the number of patients. The CLASS= option subsets the counts by the arm, and the COLORGROUP= option displays the text in the group colors. 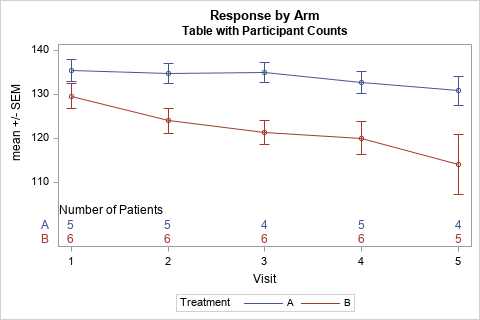 In summary, SAS 9.4 makes it is easy to graph the mean response versus time for various arms of a clinical study. Cheng wrote his paper in 2007 using SAS 9.1.3, but there have been TONS of additions to the ODS Statistical Graphics system since then. This article shows that you can let PROC SGPLOT summarize the data and plot it by using the VLINE statement or the VBOX statement. Or you can summarize the data yourself and plot it by using the SERIES and SCATTER statements. For the summarized data, you can overlay tables of statistics such as the number of patients at each time point. Whichever method you choose, the SGPLOT procedure makes it easy to create the graphs of statistics versus time.

The post Graph the mean response versus time in SAS appeared first on The DO Loop.