In a previous article, I mentioned that the VLINE statement in PROC SGPLOT is an easy way to graph the mean response at a set of discrete time points. I mentioned that you can choose three options for the length of the "error bars": the standard deviation of the data, the standard error of the mean, or a confidence interval for the mean. This article explains and compares these three options. Which one you choose depends on what information you want to convey to your audience. As I will show, some of the statistics are easier to interpret than others. At the end of this article, I tell you which statistic I recommend.

The following DATA step simulates data at four time points. The data at each time point are normally distributed, but the mean, standard deviation, and sample size of the data vary for each time point. 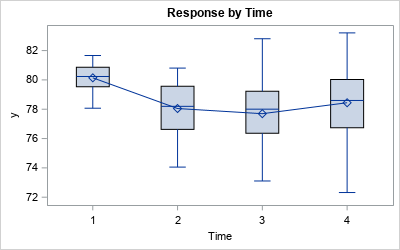 You can use PROC MEANS and a short DATA step to display the relevant statistics that show how these three statistics are related:

The table shows the standard deviation (SD) and the sample size (N) for each time point. The SEM column is equal to SD / sqrt(N). The CLMWidth value is a little more than twice the SEM value. (The multiplier depends on N; For these data, it ranges from 2.03 to 2.06.)

As shown in the next section, the values in the SD, SEM, and CLMWidth columns are the lengths of the error bars when you use the STDDEV, STDERR, and CLM options (respectively) to the LIMITSTAT= option on the VLINE statement in PROC SGPLOT.

Visualize and interpret the choices of error bars

Let's plot all three options for the error bars on the same scale, then discuss how to interpret each graph. Several interpretations use the 68-95-99.7 rule for normally distributed data. The following statements create the three line plots with error bars: 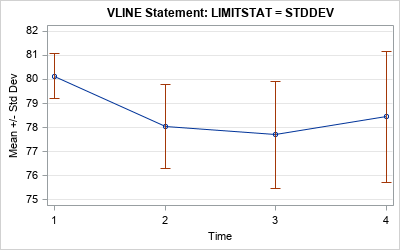 Use the standard deviations for the error bars

The main advantage of this graph is that a "standard deviation" is a term that is familiar to a lay audience. The disadvantage is that the graph does not display the accuracy of the mean computation. For that, you need one of the other statistics. 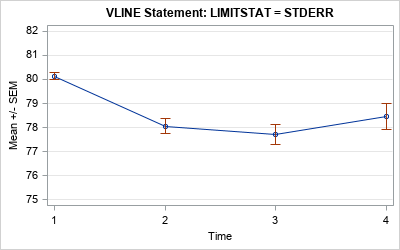 Use the standard error for the error bars

In the second graph, the length of the error bars is the standard error of the mean (SEM). This is harder to explain to a lay audience because it in an inferential statistic. A qualitative explanation is that the SEM shows the accuracy of the mean computation. Small SEMs imply better accuracy than larger SEMs.

The exact meaning of the SEM might be difficult to explain to a lay audience, but the qualitative explanation is often sufficient. 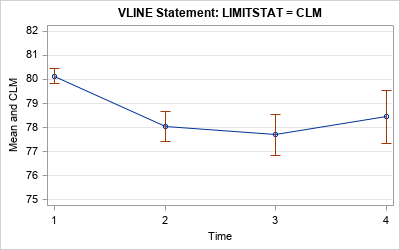 Use a confidence interval of the mean for the error bars

In the third graph, the length of the error bars is a 95% confidence interval for the mean. This graph also displays the accuracy of the mean, but these intervals are about twice as long as the intervals for the SEM.

In summary, there are three common statistics that are used to overlay error bars on a line plot of the mean: the standard deviation of the data, the standard error of the mean, and a 95% confidence interval for the mean. The error bars convey the variation in the data and the accuracy of the mean estimate. Which one you use depends on the sophistication of your audience and the message that you are trying to convey.

My recommendation? Despite the fact that confidence intervals can be misinterpreted, I think that the CLM is the best choice for the size of the error bars (the third graph). If I am presenting to a statistical audience, the audience understands the CLMs. For a less sophisticated audience, I do not dwell on the probabilistic interpretation of the CLM but merely say that the error bars "indicate the accuracy of the mean."

As explained previously, each choice has advantages and disadvantages. What choice do you make and why? You can share your thoughts by leaving a comment.

The post What statistic should you use to display error bars for a mean? appeared first on The DO Loop.