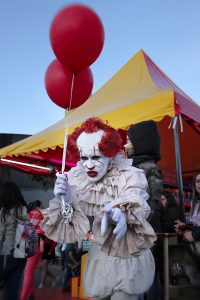 While growing up in the 80's, I watched The Golden Girls on TV with my Grandma Betty. Now, when my sister visits, we binge watch reruns on TV Land. I was excited when I saw for this Halloween, you could buy Golden Girls costumes! Too bad they sold out right away, making them one this year's most popular costumes.

For the record, I wasn't planning to dress up tonight as a Golden Girl, but the news got me to thinking how Halloween costumes have changed over the years. What was popular when? Hence, this post. I explain how to use SAS REST APIs to append a table containing historic costume data with this year's most popular costumes (including the Golden Girls and Pennywise from It). While looking at costume data in this example, consider the append steps as a template to translate any table needing updates in SAS Viya, using REST APIs. 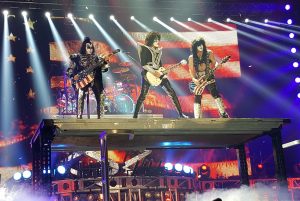 There I am, in the middle

I created a data set containing the most popular Halloween costumes from the last 50 years (1968-2018). I compiled the data from several sources who couldn't seem to agree on the best-selling costume for a given year, so I combined the lists. Many years have two entries. The data here isn't as important as the append table procedure. What fun to review the costumes list! It was not hard to tell in what year certain movies (and their sequels) were released. Only one costume I wore made the list – my 1979 Ace Frehley outfit!

Below, I'll detail each REST call along with sample code. I originally used Postman to organize my calls. This allowed me to utilize pre and post-call scripting to handle responses and create variables. You can find the entire Postman collection here on GitHub. For ease-of-display purposes in this post, I'll use equivalent cURL commands.

I registered my client, obtained access token, and added it as an environment variable ACCESSTOKEN. For more information on registering a client or getting an access token, see my earlier post Authentication to SAS Viya: a couple of approaches.

Before running any CAS actions, we need to establish a connection to the SAS Viya server.

The result of this call is a session id in the form of a089ce2b-8116-7a40-b3e3-6e39b7b5566d. This will be used in all subsequent REST calls. You could easily create another variable for further use. In the examples below I substitute the actual session id with <session-id>. You will need to substitute this place holder when attempting the steps on your own.

Data in CAS is stored in a Caslib. In the step below, I create a Caslib called HALLOWEEN and link it to a physical server path (/home/sasdemo/halloween), where the table is stored.

Note that I created the directory ~/halloween and set permissions as needed. Further, since the Caslib is global, other users have access to the data. This step (and the next step) are one time requests. If you were to repeat this process you would not need to create the Caslib nor upload the data.

Now that we have a Caslib and a path, we load the data table to the server. In this instance, I copy the costumesByYear.xlsx file into /home/sasdemo/halloween. There are multiple ways to upload data to the server. You can read more about the various methods in the SAS documentation.

While our data lives in the HALLOWEEN Caslib, we want to create a temporary Caslib to run the append step. We will then save the appended table back into HALLOWEEN. The following code creates a new Caslib called TEMP.

Now we're ready to load the data into memory and append the table.

First, we load costumesByYear into memory in the TEMP Caslib.

Now that we have successfully appended the costumesByYear table in the TEMP Caslib, we are ready to save back to the HALLOWEEN Caslib.

The TEMP Caslib is just that, temporary. With the code below we drop the Caslib and all its data.

The final step is to close our connection to the CAS server.

There you have it. With a few simple commands we were able to load, append, and save a table. This example is fairly simple in scope, but translates into more complex use cases. The steps for my 2 x 50 table are the same as it would be for a 5GB table with hundreds of columns and millions of rows.

I have asked my mother to send the Polaroid photo of me as Ace in 1979. She just has to dig it out of a photo album. Check back in a week so you can gain fodder and poke fun at me.

Append tables in SAS® Viya® with REST APIs – a treat, no tricks was published on SAS Users.