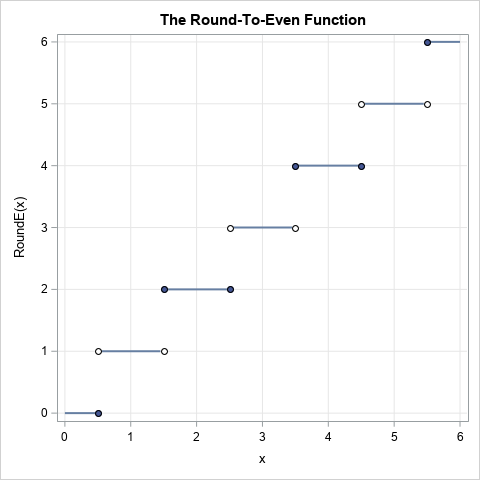 What is the round-to-even method of rounding?

All rounding functions are discontinuous step functions that map the real numbers onto the integers. The graph of the round-to-even function is shown to the right.

I intentionally use the phrase "round away from zero" instead of "round up" because you can apply the rounding to positive or negative numbers. If you round the number -2.5 away from zero, you get -3. If you round the number -2.5 towards zero, you get -2. However, for simplicity, the remainder of the article uses positive numbers.

Examples of the round-to-even method of rounding

For the number 2.5, which integer is closest to it? Well, it's a tie: 2.5 is a "half-integer" that is just as close to 2 as it is to 3. So which integer should you choose as THE rounded value? The traditional rounding method rounds the midpoint between two integers away from zero, so 2.5 is traditionally rounded to 3. This produces a systematic bias: all half-integers are rounded away from zero. This fact leads to biased estimates when you use the rounded data in an analysis.

Why use the round-to-even method of rounding?

The main reason to use the round-to-even method is to avoid systematic bias when calculating with rounded numbers. One application involves mental arithmetic. If you want to estimate the sum (or mean) of a list of numbers, you can mentally round the numbers to the nearest integer and add up the numbers in your head. The round-to-even method helps to avoid bias in the estimate, especially if many of the values are half-integers.

How to use the round-to-even method in SAS?

SAS software supports the ROUND function for standard rounding of numbers and the ROUNDE function ('E' for 'even') for round-to-even rounding. For example, the following DATA step produces the table that is shown earlier in this article:

An application: Estimate the average length of lengths with SAS

An example in the SAS documentation for PROC UNIVARIATE contains the effective channel length (in microns) for 425 transistors from "Lot 1" of a production facility. In the data set, the lengths are recorded to two decimal places. What would be the impact on statistical measurements if the engineer had been lazy and decided to round the measurements to one decimal place, rather than typing all those extra digits?

As mentioned earlier, when you use the traditional rounding method, you introduce a bias every time you encounter a "half-unit" datum such as 0.95, 1.05, or 1.15. For this real data, you can count how many data were rounded up versus rounded down by each method. To get an unbiased result, you should round up the half-unit data about as often as you round down. The following call to PROC MEANS shows the proportion of data that are rounded up and rounded down by each method. The output shows that about 55% of the data are rounded up by the traditional rounding method, whereas a more equitable 50.1% of the values are rounded up by the round-to-even method.

This example illustrates a general truism: The round-to-even method is a less biased way to round data.

This article explains the round-to-even method of rounding. This method is not universally taught, but it is taught to college students in certain disciplines. The method rounds most numbers to the nearest integer. However, half-integers, which are equally close to two integers, are rounded to the nearest EVEN integer, thus giving the method its name. This method reduces the bias when you use rounded values to estimate quantities such as sums, means, standard deviations, and so forth.

Whereas SAS provides separate ROUND and ROUNDE functions, other languages might default to the round-to-even method. For example, the round() function in python and the round function in R both implement the round-to-even method. Because some users are unfamiliar with this method of rounding, the R documentation provides an example and then explicitly states, "this is *good* behaviour -- do *NOT* report it as bug!"

You can download the SAS programs and data that are used in this article.

The post Round to even appeared first on The DO Loop.