Longitudinal data are used in many health-related studies in which individuals are measured at multiple points in time to monitor changes in a response variable, such as weight, cholesterol, or blood pressure. There are many excellent articles and books that describe the advantages of a mixed model for analyzing longitudinal data. Recently, I encountered an introductory article that summarizes the essential issues in a little more than five pages! You can download the article for free: "A Primer in Longitudinal Data Analysis", by G. Fitzmaurice and C. Ravichandran (2008), Circulation, 118(19), p. 2005-2010.

Fitzmaurice and C. Ravichandran analyze data for a randomized trial involving toddlers who were exposed to high levels of lead. The article analyzes a subset of 100 children. Half the children were given a treatment (called succimer) and the other half were given a placebo. The blood lead levels were measured for each child at baseline (week 0), week 1, week 4, and week 6. The main scientific question is "whether the two treatment groups differ in their patterns of change from baseline in mean blood lead levels" (p. 2006).

The children in the subset were measured at all four time points. There are no missing values or mistimed measurements. (This situation is fairly unusual in longitudinal data, which is often plagued by missed appointments or individuals who leave the study.) The following "spaghetti plot" shows the individual measurements for the 100 children at each time point. Each line represents a child. Blue lines indicate that the child was in the placebo group; red lines indicate the experimental group that was given succimer. 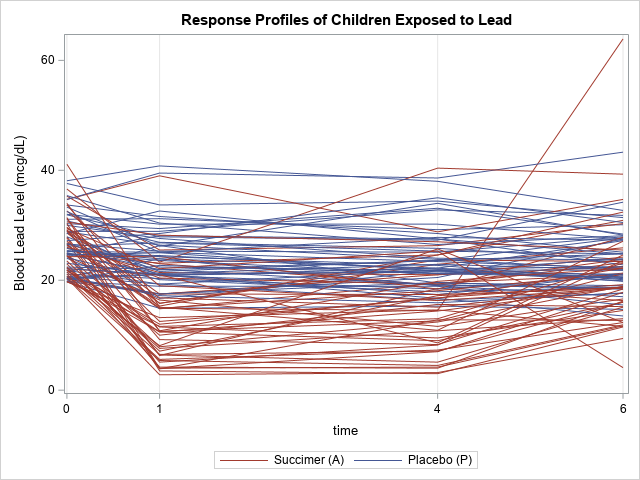 You can download the SAS program that contains the data and the programs that create the graphs and tables in this article.

In an analysis of response profiles, you compare the mean response-by-time profile for the treatment and placebo groups. You can visualize the mean response over time for each group by using the VBAR statement in PROC SGPLOT. The following graph shows the mean value and standard error for each time point for each treatment group: 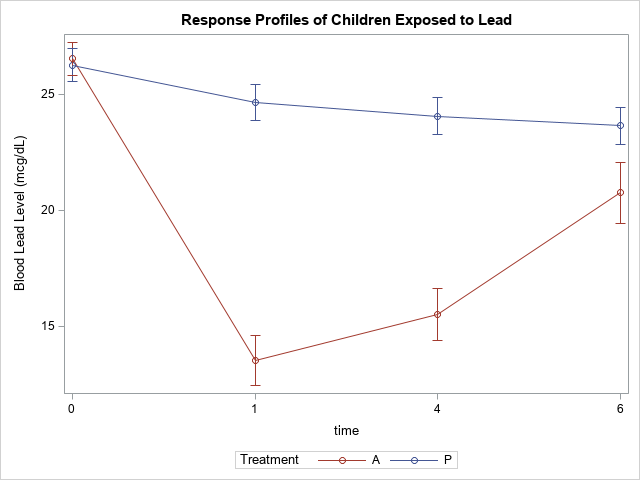 If the treatment is ineffective, the line segments for the two treatment groups will be approximately parallel. The graph shows that this is not that case for these data. The visualization indicates that the mean blood-lead value for the treatment group (Treatment='A') is lower than for the placebo group at 1 and 4 weeks.

You can use PROC GLM to confirm that these differences are statistically significant and to estimate the effect that taking succimer had on the mean blood-lead level: 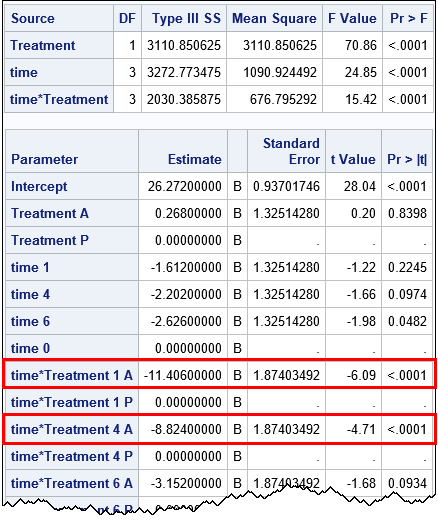 Advantages and disadvantages of the analysis of response profiles

As discussed in Fitzmaurice and Ravichandran (2008), the analysis of the response profile has several advantages:

However, this simple method suffers from several statistical problems:

The inability to model individual trajectories is often the reason that researchers abandon the response-profile analysis in favor of a more complicated mixed model. To be clear, the GLM model can make predictions, but the predicted values for every child in the placebo group are the same. Similarly, the predicted values for every child in the experimental group are the same. This is shown in the following panel of graphs, which shows the predicted response curves for six children in the study, three from each treatment group. 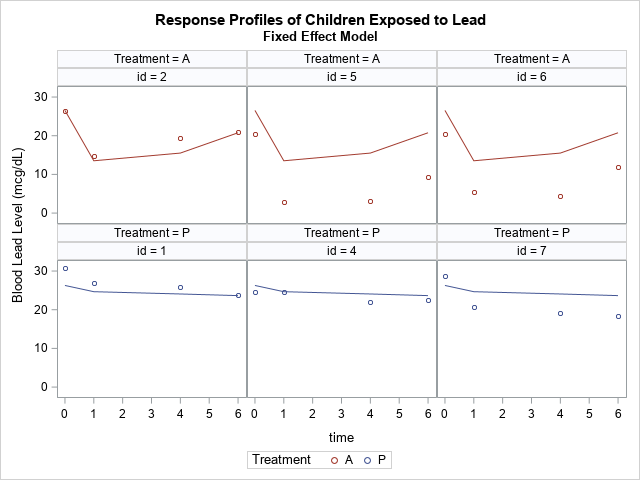 The same is true for the patients in the placebo group, three of which are plotted in the second row. The predicted values are "too low" for ID=1 and are "too high" for ID=4.

You can download the SAS code and data for the response-profile analysis.

This blog post is a brief summary of the article "A Primer in Longitudinal Data Analysis" (Fitzmaurice and Ravichandran, 2008). See the article for more details. Also, these data and these ideas are also discussed in the book Applied Longitudinal Analysis (2012, 2nd Ed) by G. Fitzmaurice, N. Laird, and J. Ware. You can download data (and SAS programs) from the book at the book's web site.

The post Longitudinal data: The response-profile model appeared first on The DO Loop.