This article shows how to solve each problem by using the SAS/IML matrix language. A future article will discuss permutation tests for binary matrices. For clarity, I introduce the following macro that uses a temporary variable to swap two sets of values:

Where do binary matrices differ?

The SAS/IML matrix language enables you to treat matrices as high-level objects. You often can answer questions about matrices without writing loops that iterate over the elements of the matrices. For example, if you have two matrices of the same dimensions, you can determine the cells at which the matrices are unequal by using the "not equal" (^=) operator. The following SAS/IML statements define two 2 x 10 matrices and use the "not equal" operator to find the cells that are different:

The matrices A and B are similar. They both have three 1s in the first row and fours 1s in the second row. However, the output shows that the matrices are different for the four elements in the sixth and tenth columns. Although I used entire matrices for this example, the same operations work on row vectors.

The proportion of elements in common

You can use various statistics to measure the similarity between the A and B matrices. A simple statistic is the proportion of elements that are in common. These matrices have 20 elements, and 16/20 = 0.8 are common to both matrices. You can compute the proportion in common by using the express (A=B)[:], or you can use the following statements if you have previously computed the Diff matrix:

The first two tasks were easy. A more complicated task is swapping values that differ between rows. The swapping operation is not difficult, but it requires finding the k locations where the rows differ and then swapping all or some of those values. In a permutation test, the number of elements that you swap is a random integer between 1 and k, but for simplicity, this example uses the SWAP macro to swap two cells that differ. For clarity, the following example uses temporary variables such as x1, x2, d1, and d2 to swap elements in the matrix A: 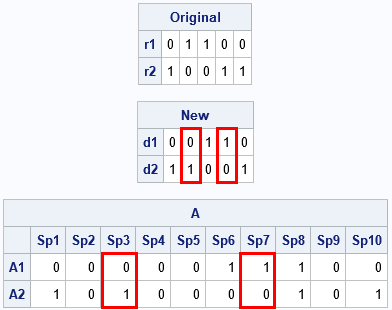 The vectors x1 and x2 are the rows of A to compare. The vectors d1 and d2 are the subvectors that contain only the elements of x1 and x2 that differ. The example swaps the second and fourth columns of d1 and d2. The new values are then inserted back into the matrix A. You can compare the final matrix to the original to see that the process swapped two elements in each of two rows.

Although the examples are for binary matrices, these techniques work for any numerical matrices.

The post Swap elements in binary matrices appeared first on The DO Loop.