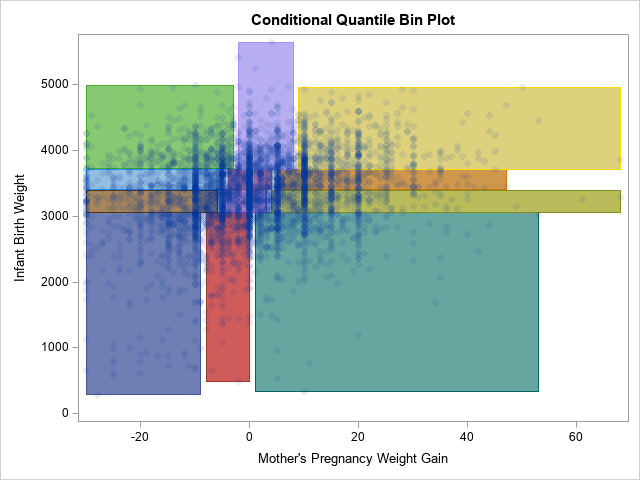 A 2-D "bin plot" counts the number of observations in each cell in a regular 2-D grid. The 2-D bin plot is essentially a 2-D version of a histogram: it provides an estimate for the density of a 2-D distribution. As I discuss in the article, "The essential guide to binning in SAS," sometimes you are more interested in displaying bins that contain (approximately) an equal number of observations. This leads to a quantile bin plot.

A SAS programmer on the SAS Support Communities recently requested a variation of the quantile bin plot. In the variation, the bins for the Y variable are computed as usual, but the bins for the X variable are conditional on the Y quantiles. This leads to a situation where the bins do not form a regular grid, but rather vary in both weight and width, as shown to the right. I call this a conditional quantile bin plot. In the graph, there are 12 rectangles. Each contains approximately the same number of observations. The three rectangles across each row contain a quartile of Y values.

This article shows how to construct a conditional quantile bin plot in SAS by first finding the quantiles for the Y variable and then finding the quantiles for the X variable (conditioned on the Y) for each Y quantile. You can solve this problem by using the SAS/IML language (as shown in the Support Community post) or by using PROC RANK and the DATA step, as shown in this article.

Although it is straightforward to compute conditional quantiles, it is less clear how to display the rectangles that represent the cells in the graph. On the Support Community, one solution uses the VECTOR statement in PROC SGPLOT, whereas another solution uses the POLYLINE command in an annotate data set. In this article, I present a third alternative, which is to use a POLYGON statement in PROC SGPLOT. I think that the POLYGON statement is the most powerful option because you can easily display the rectangles as filled, unfilled, in the foreground, in the background, and you can color the polygons in many informative ways.

To compute quantiles, you can use the QNTL function in PROC IML or you can call PROC RANK and use the GROUPS= option. The following statements use PROC RANK. ("KSharp" used this method for his answer on the Support Community.) One noteworthy idea in the following program is to use the CATX or CATT function to form a grouping variable that combines the group names for the X and Y variables. 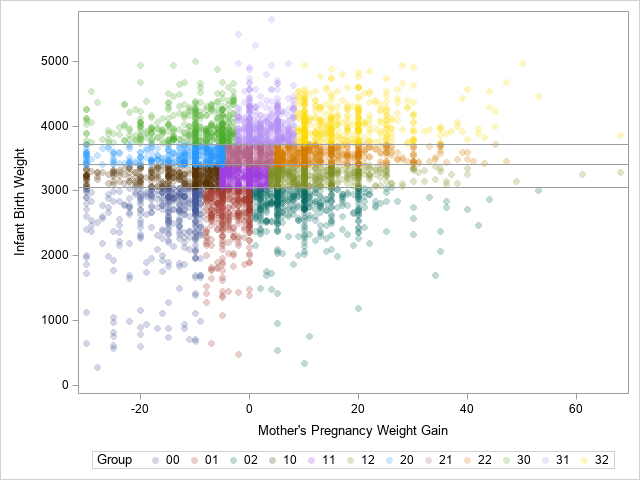 The SCATTER statement uses the GROUP= option to color each observation according to the quantile bin to which it belongs. The horizontal reference lines are the 25th, 50th, and 75th percentiles of the Y variable. These lines separate the Y variable into four groups. Within each group, the X variable is divided into three groups. The remainder of the program shows how to construct and plot the 12 rectangles that bound the groups.

Create polygons for the quantile bins 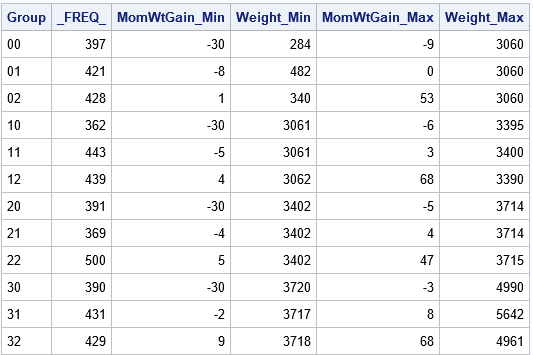 The Limits data set contains all the information that you need to construct the cells of the conditional quantile bin plot. PROC MEANS writes the ranges of the variables in a wide format. In order to use the POLYGON statement in PROC SGPLOT, you need to convert the data to long form and use the GROUP variable as an ID variable for the polygon plot:

Create polygons for the quantile bins

The advantage of creating polygons is that you can experiment with many ways to visualize the conditional quantile plot. For example, the simplest quantile plot merely overlays rectangles on a scatter plot of the bivariate data, as follows: 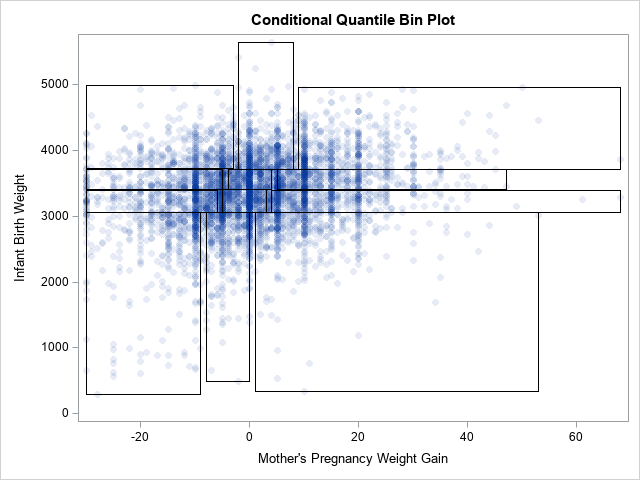 The graph that results from these statements is shown at the top of this article.

To give a third example, you can plot the rectangles in the background and use the COLORRESPONSE= option to color the rectangles according to the number of observations inside each bin. This is shown in the following graph, which uses the default three-color color ramp to assign colors to rectangles. 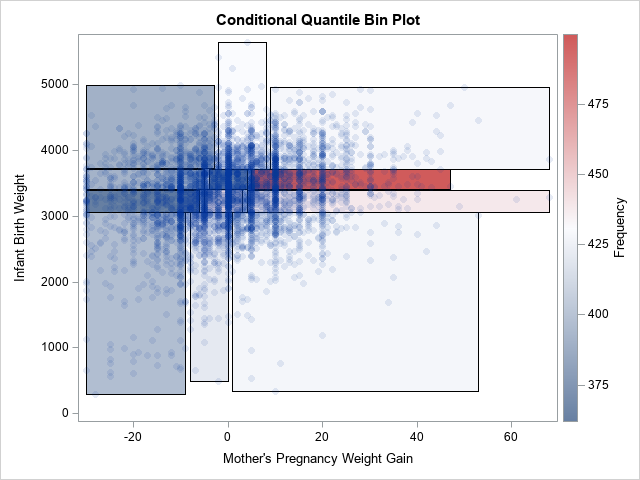 In summary, this article shows how to construct a 2-D quantile bin plot where the quantiles in the horizontal direction are conditional on the quantiles in the vertical direction. In such a plot, the cells are irregularly spaced but have approximately the same number of observations in each cell. You can use polygons to create the rectangles. The polygons give you a lot of flexibility about how to display the conditional quantile plot.

You can download the complete SAS program that creates the conditional quantile bin plot.

The post Create a conditional quantile bin plot in SAS appeared first on The DO Loop.