The Johnson SB and SU distributions have four parameters and are extremely flexible, which means that they can fit a wide range of distribution shapes. As John von Neumann once said, "With four parameters, I can fit an elephant and with five I can make him wiggle his trunk." As I indicated in an article about the moment-ratio diagram, if you specify the skewness and kurtosis of a distribution, you can find a unique member of the Johnson system that has the same skewness and kurtosis.

This article shows how to compute the four essential functions for the Johnson SB distribution: the PDF, the CDF, the quantile function, and a method to generate random variates. It also shows how to fit the parameters of the distribution to data by using PROC UNIVARIATE in SAS.

What is the Johnson SB distribution?

The relationship between the SB and the normal distribution provides an easy way to generate random variates from the SB distribution. You simply generate a normal variate and then transform it, as follows:

I used PROC UNIVARIATE in SAS to overlay the SB density on the histogram of the random variates. The result follows: 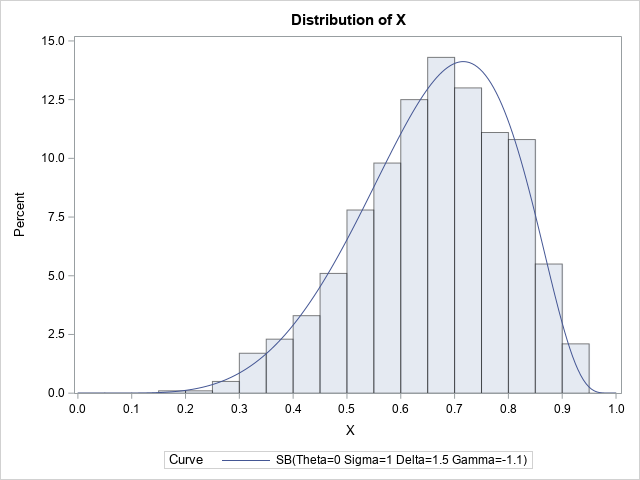 The PDF of the SB distribution

The formula for the SB density function is given in the PROC UNIVARIATE documentation (set h = v = 1 in the formula). You can evaluate the probability density function (PDF) on the interval (θ, θ + σ) in order to visualize the density function. So that you can easily compare various shape parameters, the following examples use θ=0 and σ=1 and plot the density on the interval (0, 1). The θ parameter translates the density curve and the σ parameter scales it, but these parameters do not change the shape of the curve. Therefore, only the two shape parameters are varied in the following program, which generates the PDF of the SB distribution for four combinations of parameters. 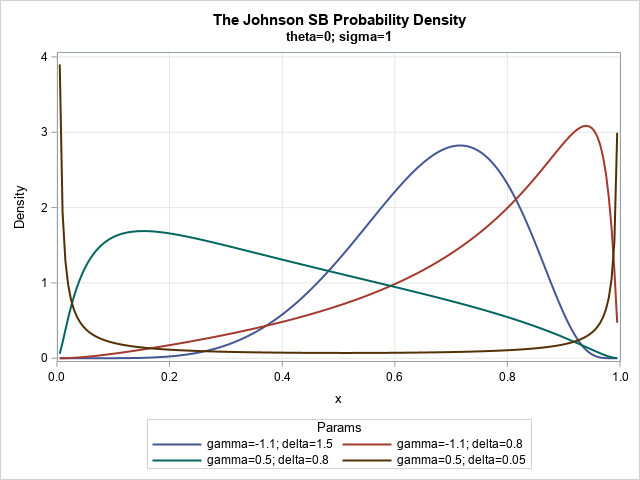 The CDF and quantiles of the SB distribution

Fitting parameters of the SB distribution

If you have data, you can use PROC UNIVARIATE to estimate four parameters of the SB distribution that fit the data. In practice, often the threshold (and sometimes the scale) is known from domain-specific knowledge. For example, if you are modeling student test scores, you might know that the scores are always in the range [0, 100], so θ=0 and σ=100.

In an earlier section, we simulated a data set for which all values are in the interval [0, 1]. The following call to PROC UNIVARIATE estimates the shape parameters for these simulated data: 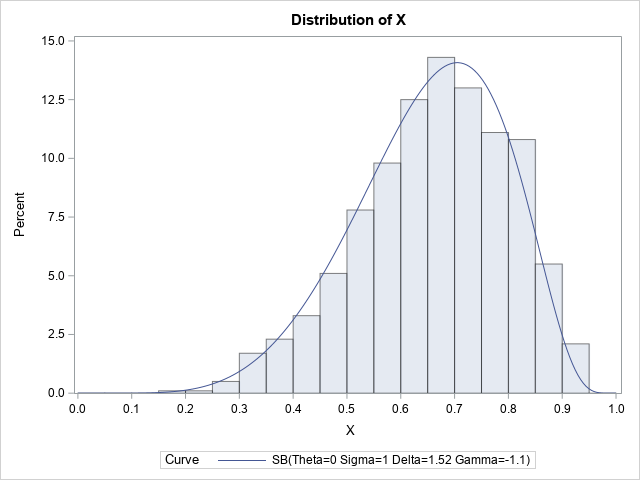 By default, the HISTOGRAM statement uses the FITMETHOD=PERCENTILE method to fit the data. You can also use FITMETHOD=MLE to obtain a maximum likelihood estimate, or FITMETHOD=MOMENTS to estimate the parameters by matching the sample moments. In this example, I show how to use the FITMETHOD=MOMENTS option, which, for these data, seems to provide a better fit than the method of percentiles.

The post The Johnson SB distribution appeared first on The DO Loop.