A previous article shows how to interpret the collinearity diagnostics that are produced by PROC REG in SAS. The process involves scanning down numbers in a table in order to find extreme values. This can be a tedious and error-prone process. Friendly and Kwan (2009) compare this task to a popular picture book called Where's Waldo? in which children try to find one particular individual (Waldo) in a crowded scene that involves of hundreds of people. The game is fun for children, but less fun for a practicing analyst who is trying to discover whether a regression model suffers from severe collinearities in the data.

Friendly and Kwan suggest using visualization to turn a dense table of numbers into an easy-to-read graph that clearly displays the collinearities, if they exist. Friendly and Kwan (henceforth, F&K) suggest several different useful graphs. I decided to implement a simple graph (a discrete heat map) that is easy to create and enables the analyst to determine whether there are collinearities in the data. One version of the collinearity diagnostic heat map is shown below. (Click to enlarge.) For comparison, the table from my previous article is shown below it. The highlighted cells in the table were added by me; they are not part of the output from PROC REG. 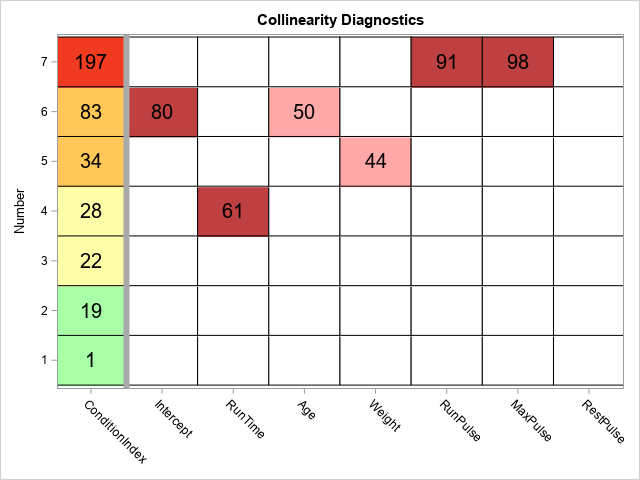 There are two important sets of elements in a collinearity diagnostics table. The first is the set of condition indices, which are displayed in the leftmost column of the heat map. The second is the set of cells that show the proportion of variance explained by each row. (However, only the rows that have a large condition index are important.) F&K make several excellent points about the collinearity diagnostic table:

There are many ways to visualize the Collinearity Diagnostics table. F&K use traffic lighting for the condition numbers and a bubble plot for the proportion of variance entries. Another choice would be to use a panel of bar charts for the proportion of variance. However, I decided to use a simple discrete heat map. The following list describes the main steps to create the plot. You can download the complete SAS program that creates the plot and modify it (if desired) to use with your own data. For each step, I link to a previous article that describes more details about how to perform the step.

The discrete heat map enables you to draw the same conclusions as the original collinearity diagnostics table. However, whereas using the table is akin to playing "Where's Waldo," the heat map makes it apparent that the most severe collinearity (top row; red condition index) is between the RunPulse and MaxPulse variables. The second most severe collinearity (second row from top; orange condition index) is between the Intercept and the Age variable. None of the remaining rows have two or more large cells for the proportion of variance.

You can download the SAS program that creates the collinearity plot. It would not be hard to turn it into a SAS macro, if you intend to use it regularly.

The post Visualize collinearity diagnostics appeared first on The DO Loop.