The purpose of this article is to show how to use SAS to create a graph that illustrates a basic idea in a binary classification analysis, such as discriminant analysis and logistic regression. The graph, shown at right, shows two populations. Subjects in the "negative" population do not have some disease (or characteristic) whereas individuals in the "positive" population do have it. There is a function (a statistical model) that associates a score with each individual, and the distribution of the scores is shown. A researcher wants to use a threshold value (the vertical line) to classify individuals. An individual is predicted to be negative (does not have the disease) or positive (does have the disease) according to whether the individual's score is lower than or higher than the cutoff theshold, respectively.

Typically, these concepts are visualized by using a panel of histograms based on a finite sample of data. However, this visualization uses the populations themselves, rather than data. In particular, this visualization assumes two normal populations, a situation that is called the binormal model for binary discrimination (Krzandowski and Hand, ROC Curves for Continuous Data, 2009, p. 31-35).

A graph of the populations

In building up any complex graph, it is best to start with a simpler version. A simple version enables you to develop and debug your program and to experiment with various visualizations. This section creates a version of the graph that does not have the threshold line or the four categories (TN, FP, FN, and TP).

The first few observations are shown below:

Because the data are in "long form," you can use PROC SGPANEL to create a basic graph. You need to use PANELBY Class to display the negative population in one graph and the positive population in another. Here are a few design decisions that I made for the visualization: 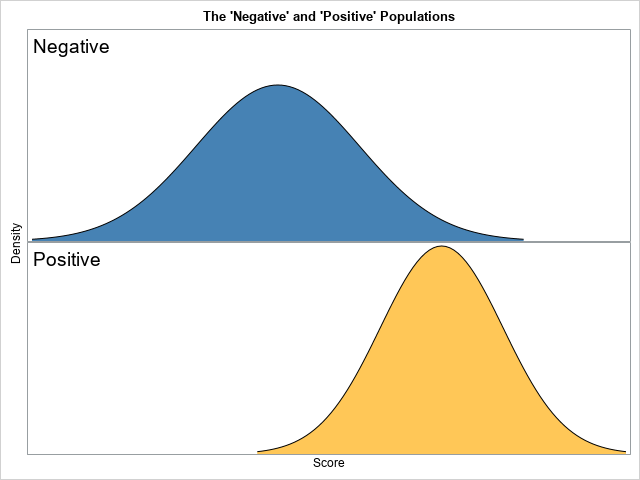 The previous section graphs the populations. To add the regions that are correctly and incorrectly classified by a given threshold value, you need to modify the DATA step that creates the density curves. In addition to the Class indicator variable (which has the values "Negative" and "Positive"), you need to add an indicator variable that has four values: "TN", "FP", "FN", and "TP". This second indicator variable will be used to assign colors for each region. The four regions depend on the value of the threshold parameter, which means that the DO loop that iterates over the X values should be split into two parts: the part less than the threshold and the part greater than the threshold. This is shown by the following:

The first few observations are shown below:

The graph should display labels for the four regions. I will use the TEXT statement to place the labels. For the height of the labels, I will use 90% of the maximum height of the density curves. For the horizontal positions, I will offset the text by +/-50% of the standard deviation of the distribution. I use the STYLEATTRS statement to assign the colors to the four regions.

In summary, this article shows how to create a graph that illustrates a fundamental relationship in the binary classification problem.

The post Visualization of a binary classification analysis appeared first on The DO Loop.