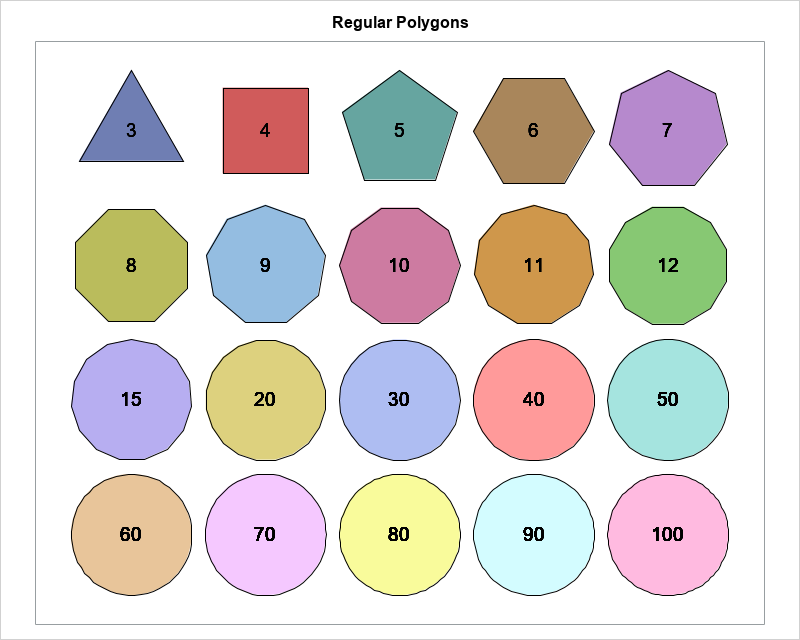 I had two reactions to the graphic. The first was "Cool! I want to create a similar figure in SAS!" (I have done so on the right; click to enlarge.) The second reaction was that the idea is both mathematically trivial and mathematically sophisticated. It is trivial because it is known to Archimedes more than 2,000 years ago and is readily understood by using high school math. But it is sophisticated because it is a particular instance of a mathematical limit, which is the foundation of calculus and the mathematical field of analysis.

The figure also demonstrates the fact that you can approximate a smooth object (a circle, a curve, a surface, ...) by a large number of small, local, linear approximations. It is not an exaggeration to say that that concept is among the most important concepts in applied mathematics. It is used in numerical methods to solve nonlinear equations, integrals, differential equations, and more. It is used in numerical optimization. It forms the foundations of computer graphics. A standard technique in computational algorithms that involves a nonlinear function is to approximate the function by the first term of the Taylor expansion—a process known as linearization.

An approximation of pi

You can use Archimedes's ideas to approximate π by using trigonometry and regular polygons, as shown in the following paragraph.

Although Archimedes did not have access to a modern computer, you can easily write a SAS DATA step program to reproduce Archimedes's approximations to the circumference and area of the unit circle, as shown below:

As you can see from the graph, the circumference and area of the regular polygons converge quickly to 2π and π, respectively. After n = 40 sides, the curves are visually indistinguishable from their limits, which is the same result that we noticed visually when looking at the grid of regular polygons.

The DATA step also computes the difference between the measurements of the circumscribed and inscribed polygons. You can print out a few of the differences to determine how close these estimates are to the circumference and area of the unit circle: 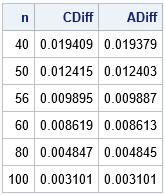 Approximating a smooth curve by a series of discrete approximations is the foundation of calculus and modern numerical methods. The idea had its start in ancient Greece, but the world had to wait for Newton, Leibnitz, and others to provide the mathematical machinery (limits, convergence, ...) to understand the concepts rigorously.

The post Polygons, pi, and linear approximations appeared first on The DO Loop.