Every day we face risks. If we drive to work, we risk a fatal auto accident. If we eat red meat and fatty foods, we risk a heart attack. If we go out in public during a pandemic, we risk contracting a disease. A logical response to risk is to mitigate the risk by making healthy choices. Don't text while driving. Modify your diet. Stay at home as much as possible during a pandemic.

Unfortunately, sometimes individuals do not make wise choices. During the early stages of the coronavirus outbreak, there were reports of people ignoring social-distancing guidelines and aggregating on beaches and in bars. Rick McAnulty, a psychologist and professor of psychology at UNC-Charlotte, states that noncompliance with health-related issues is widespread and is not limited to the coronavirus pandemic. In general, he says, "People estimate the probability of risk—and decide the odds outweigh probable danger."

But how do people "estimate the probability" of a risk? Unless you are an expert in traffic accidents, heart disease, or viruses, a realistic estimate is too complicated for most of us. However, there is a simple probability model that demonstrates how the probability of a disastrous result increases due to repeated exposure to risk. In simple terms, if doing some action might lead to a bad result, you can reduce your overall risk by

Yes, this is common sense, but you can also demonstrate these facts mathematically by using a probability model, as shown in subsequent sections. I will use the spread of coronavirus as a motivating example, but be aware that I am a statistician, not an expert in infectious diseases.

A statistical model for risk

During the coronavirus pandemic, public-health experts advocate modifying our behavior to reduce the risk of catching and spreading the disease. The public-health directives can be classified into two broad categories:

It is fortunate that the same social distancing that protects us from others also protects others from us!

For example, you could define a "trial" to mean "go to the grocery store" and the "event" to mean "become infected with the coronavirus." There is a probability that the event occurs for each trial, and the model assumes that the probability is the same for each trial. Different activities might have different probabilities. Going to work might be riskier than going to the store, which might be riskier than a walk in the neighborhood.

The cumulative distribution of the geometric model 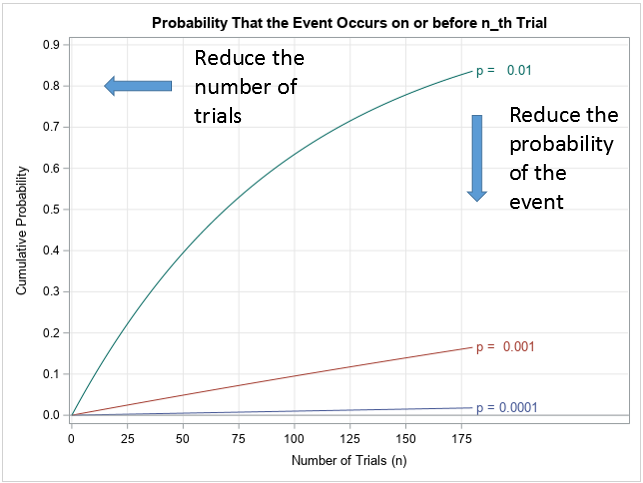 There are three distinguishing features of the curves:

As mentioned previously, public-health officials urge each individual to limit the number of person-to-person interactions, if possible. Unfortunately, some people (such as health care workers and grocery clerks) cannot control the number of people with whom they interact. Thus, the directives also instruct those workers (and we who interact with them!) to use other methods to reduce the probability of the underlying event (infection). Taken together, the directives try to move each member of the population "left and down" towards the lower-left corner of the graph, where the probability of infection is the lowest.

With random events, sometimes you are unlucky

If you hear that there is only a 1% chance that some random event will occur, you might be falsely lured into thinking you can take that risk about 100 times before you need to worry about it. THAT IS NOT TRUE. No matter how small the probability is, the event can happen on the first trial, or the sixth, or the tenth. You can't predict when an event will happen.

In a previous article, I showed how to simulate a random sample from the geometric distribution. One such sample is shown below for p=0.01. The graph represents 20 subjects who each repeated a trial until the event occurred. The graph shows an ordered list of the number of trials for the 20 subjects: 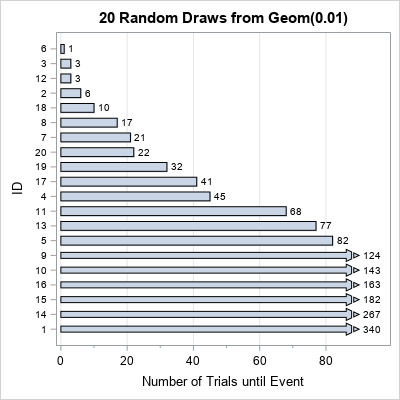 Do we know the probability of catching coronavirus?

I will not attempt to assign a probability to "the event" of catching the coronavirus while engaging in everyday activities. Other mathematicians have made estimates earlier in the pandemic, and you can read about their efforts in the links below:

The geometric distribution isn't complex enough to be realistic, and we don't have good estimates for the probability of catching the coronavirus, so what good is this simple model? Well, as the statistician George Box famously said, "All models are wrong, but some are useful." Even simple models can provide a qualitative description of the consequences of certain actions. You can use the cumulative geometric distribution to understand how actions under your control (social distancing, washing hands, ....) affect the probability of spreading coronavirus to yourself and to others. Specifically, the model supports the basic advice from health care professionals:

So help yourself and others by following the directives of health care professionals. The strategies they advocate are supported by science, common sense, and the mathematics of probability theory.

The post On reducing the spread of coronavirus appeared first on The DO Loop.