In the second post of the Getting Started with Python Integration to SAS® Viya® series we will learn about Working with CAS Actions and CASResults Objects. CAS actions are commands sent to the CAS server to run a task, and CASResults objects contain information returned from the CAS server. This post will cover a few basic CAS actions, and how to easily work with the information returned.

First, you need to understand CAS actions. From performing data preparation, modeling, imputing missing values, or even retrieving information about your CAS session, CAS actions perform a single task on the CAS server. CAS actions are organized with other CAS actions in a CAS action set. CAS action sets contain actions that are based on common functionality.

In the end, I like to think of CAS action sets as a package, and all the CAS actions inside an action set as a method.

Getting Started with CAS Actions

We will start with a basic CAS action to view all available loaded action sets in the current CAS session. Before you use any CAS action you must connect to the CAS server. For more information on connecting to the CAS server, visit Part 1 of the series. 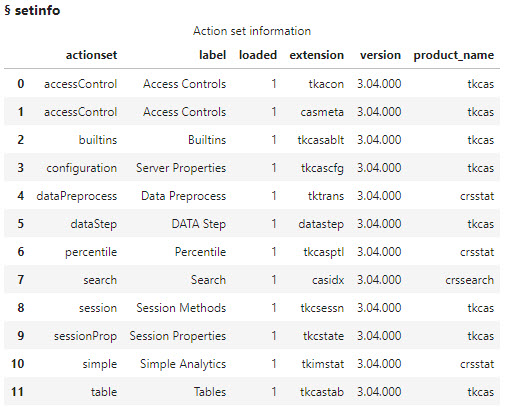 Your output information might differ depending on your SAS Viya installation.

The output shows a list of the loaded action sets on the CAS server with additional information for each. With a quick scan, it almost looks like a Pandas DataFrame. However, let's go back and run the actionSetInfo CAS action, but this time use the Python type function to see the data type of the output.

CAS actions return a CASResults object. A CASResults object is an ordered Python dictionary with additional methods and attributes. There are no specific rules about how many keys are contained in the CASResults object, or what values the keys return. That information depends on the CAS action used.

One thing to note is that CASResults objects are local on your client machine. That is, the data is not in CAS anymore, it has been processed by CAS and returned locally. This is something to keep in mind when you are working with big data in CAS and try to return more data than your local computer can handle.

Let's continue by examining the output from our previous example. The CASResults object returns one key named setinfo, and one value. You can quickly tell by looking at the output. 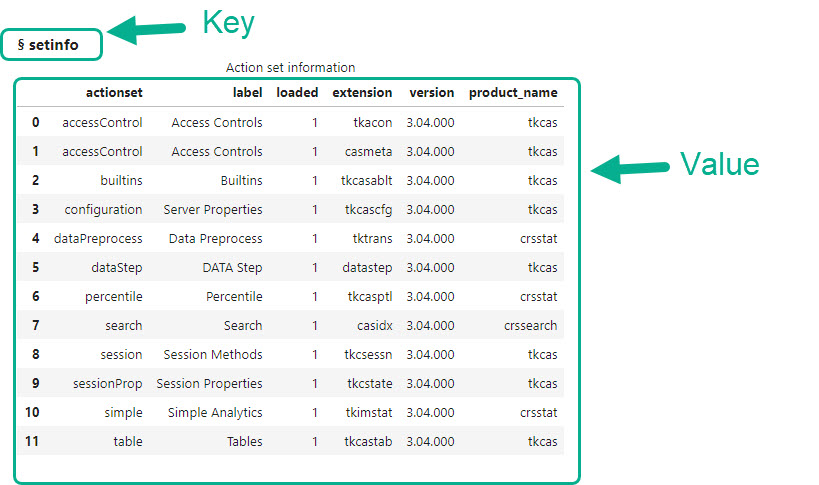 However, another method to view all the keys in the CAResults object is to use the Python dictionary keys method. In this example, it will return one key named setinfo. 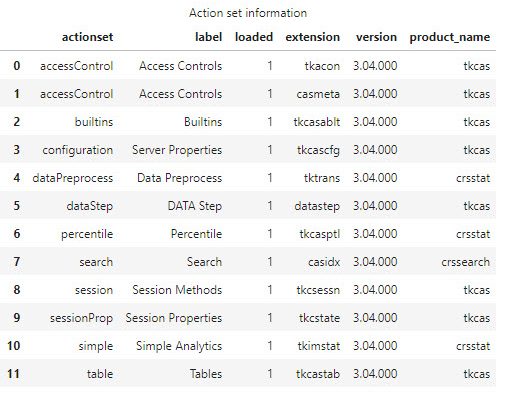 As mentioned earlier, the output seems to resemble a Pandas DataFrame. To confirm our suspicion, we can use the type function to see the data type of the value returned by the setinfo key,

A SASDataFrame is a subclass of a Pandas DataFrame. As a result, you can work with them as you normally would a Pandas DataFrame! Another thing to note is a SASDataFrame is local data. Again, as you use CAS you must be aware CAS can handle more data than your local computer can handle. When bringing data locally make sure it's usable on your local machine. We will discuss this in future posts.

Next, I'll use some Pandas methods on the df object. Let's start with the head method to view the first five rows.

Or filter the data using the loc method. In this scenario I want to find all action sets with the name simple, and return the actionset and label columns.

Or check unique values of the product_name column by using the value_counts method.

No that's it. I think you get my point! You can work with a SASDataFrame object like you would a Pandas DataFrame!

Lastly, let's use another CAS action, but this time the CASResults object contains multiple keys, with multiple value types.

From the looks of the output, I see there are three keys; About, server, and nodestatus. However, let's check our assumption by using the keys method on the CASResults object.

In the output there are three keys as expected. Let's look at the data type of each key by writing a quick Python loop to print the name of the key and the value type returned by that key.

The serverStatus CAS action contains three keys, one key contains a dictionary object, and the other two keys contain a SASDataFrame.

In conclusion, understanding CAS actions and the CASResults objects are essential when working with CAS. A couple of key points to remember:

That was a quick overview of a few basic CAS actions, and how to work with the CASResults objects they return.  You can check out the SAS documentation below for all available CAS Actions.

SAS® Viya® 3.5 Actions and Action Sets by Name and Product

Getting Started with Python Integration to SAS® Viya® Series Index

Getting Started with Python Integration to SAS® Viya® - Part 2 - Working with CAS Actions and CASResults Objects was published on SAS Users.