The iml action in SAS Viya (introduced in Viya 3.5) provides a set of general programming tools that you can use to implement a custom parallel algorithm. This makes the iml action different than other Viya actions, which use distributed computations to solve specific problems in statistics, machine learning, and artificial intelligence. By using the iml action, you can use programming statements to define the problem you want to solve. One of the simplest ways to run a parallel program is to use the MAPREDUCE function in the iml action, which enables you to distribute a computation across threads and nodes. This article describes the MAPREDUCE function and gives an example.

What is the map-reduce paradigm?

Perhaps the simplest map-reduce computation is to add a large set of numbers in a distributed manner. Suppose you have N numbers to add, where N is large. If you have access to k threads, you can ask each thread to add approximately N/k numbers and return the sum. The mapper function on each thread computes a partial sum. The next step is the reducing step. The k partial sums are passed to the reducer, which adds them and returns the total sum. In this way, the map-reduce paradigm computes the sum of the N numbers in parallel. For embarrassingly parallel problems, the map-reduce operation can reduce the computational time by up to a factor of k, if you do not pass huge quantities of data to the mappers and reducers.

You can use the MAPREDUCE function in the iml action to implement the map-reduce paradigm. The syntax of the MAPREDUCE function is
result = MAPREDUCE( mapArg, 'MapFunc', 'RedFunc' );
In this syntax, 'MapFunc' is the name of the mapping function and mapArg is a parameter that is passed to the mapper function in every thread. The 'RedFunc' argument is the name of the reducing function. You can use a predefined (built-in) reducers, or you can define your own reducer. This article uses only predefined reducers.

Let's implement the sum-of-N-numbers algorithm in the iml action by using four threads to sum the numbers 1, 2, ..., 1000. (For simplicity, I chose N divisible by 4, so each thread sums N/4 = 250 numbers.) There are many ways to send data to the mapper. This program packs the data into a matrix that has four rows and tells each thread to analyze one row. The program defines a helper function (getThreadID) and a mapper function (AddRow), which will run on each thread. The AddRow function does the following:

In the following program, the built-in '_SUM' reducer adds the partial sums and returns the total sum. The program prints the result from each thread. Because the computation is performed in parallel, the order of the output is arbitrary and can vary from run to run. If you are not familiar with using PROC CAS to call the iml action, see the getting started example for the iml action.

The output shows the results of the PRINT statement in each thread. The output can appear in any order. For this run, the first output is from the second thread, which computes the sum of the numbers 251, 252, . . . , 500 and returns the value 93,875. The next output is from the fourth thread, which computes the sum of the numbers 751, 752, . . . , 1000. The other threads perform similar computations. The partial sums are sent to the built-in '_SUM' reducer, which adds them together and returns the total sum to the main program. The total sum is 500,500 and appears at the end of the output.

You can use the following diagram to help visualize the program. (Click to enlarge.) 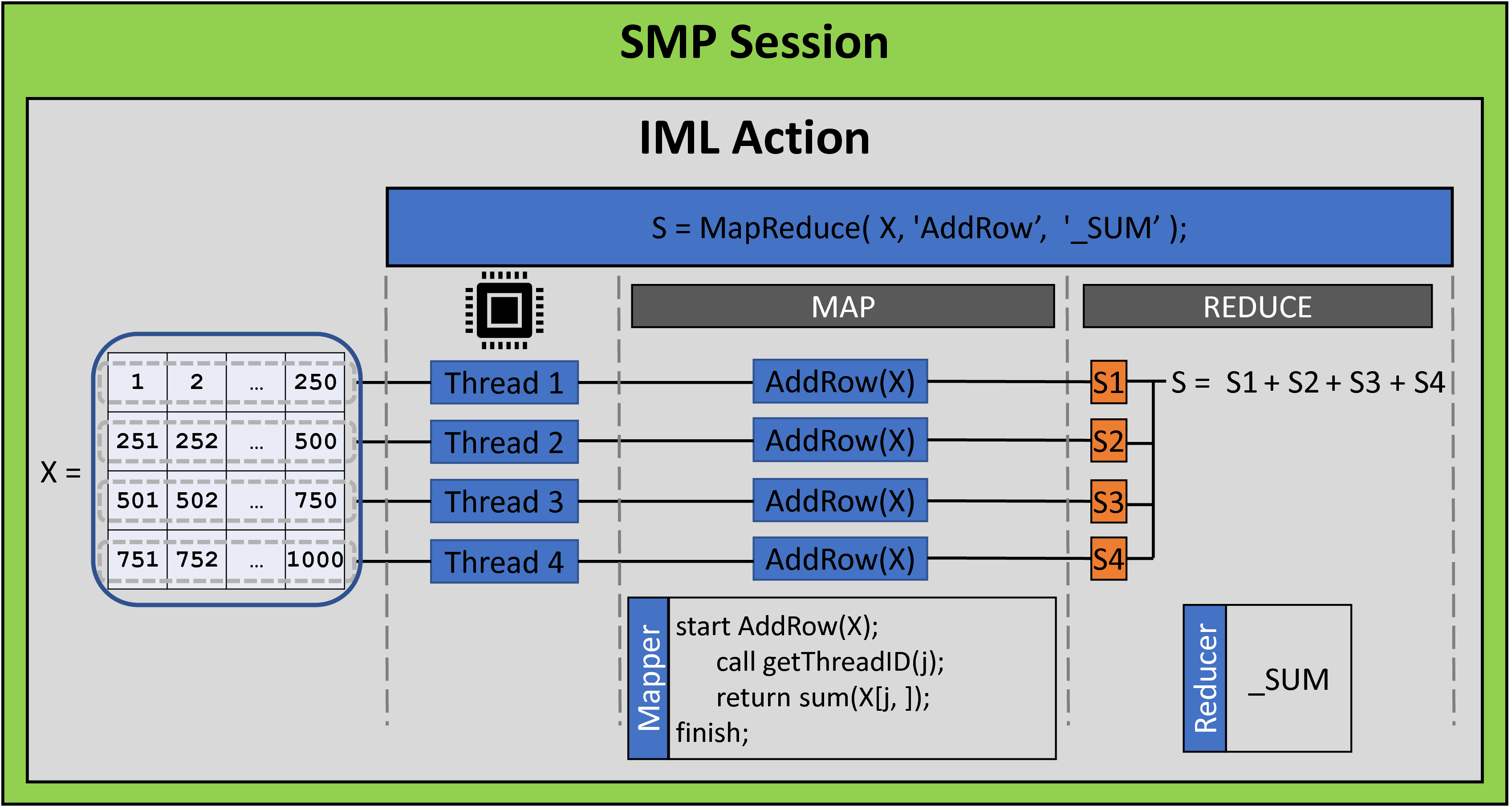 This article demonstrates a simple call to the MAPREDUCE function in the iml action, which is available in SAS Viya 3.5. The example shows how to divide a task among k threads. Each thread runs concurrently and independently. Each thread runs a mapping function, which computes a portion of the task. The partial results are then sent to a reducing function, which assembles the partial results into a final answer. In this example, the task is to compute a sum. The numbers are divided among four threads, and each thread computes part of the sum. The partial sums are then sent to a reducer to obtain the overall sum.

This example is one of the simplest map-reduce examples. Obviously, you do not need parallel computations to add a set of numbers, but I hope the simple example enables you to focus on map-reduce architecture. In a future article, I will present a more compelling example.

The post A general method for parallel computation in SAS Viya appeared first on The DO Loop.